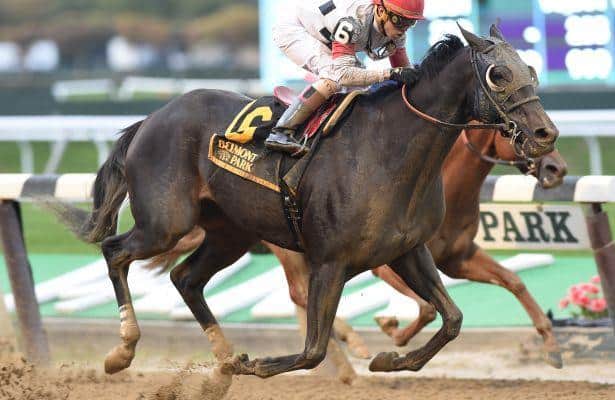 Graded stakes status restored, the 25th running of the $250,000 Frank J. De Francis Memorial Dash has attracted a solid field of sprinters to Laurel Park. A Grade 1 race from 1999 to 2009, the six-furlong affair went through a rough go, missing two of three years, but it is now back as a regular on the fall schedule. Looking to regain glory days which saw it become the premier sprint race in Maryland, it was in the second running where a pair of sprint champions went at it, with Housebuster getting the best of Safely Kept 25 years ago. No such champions in Saturday's De Francis Dash, but the field of nine does include a strong bunch of older sprint specialists, especially the top three. Let’s take a look at the field with my analysis and projected odds …

SCRATCHED 9) Stallwalkin Dude (5-2) – A winner of 16 races lifetime, the six-year-old gelding looks to be in career best form in his last four starts, which includes stakes wins at Belmont and Saratoga, as well as second and third places finishes in the Grade 1 Vosburgh and Grade 1 Forego. Drawn on the far outside with Jersey Joe Bravo donning the silks, he should be able to sit a comfortable trip near the back of the pack while solid early fractions are carved out on the front end. He’ll need the fastest of those to get a little leg weary, but he is not the type to wait too long. A repeat of his recent form gives him an excellent chance to roll by in the stretch for his fourth win of the year. With a Late Run

2) Ivan Fallunovalot (7-2) – Also a six-year-old gelding, this Midwest based son of Valid Expectations has won five of his last six starts with his only loss coming in last year’s Breeders’ Cup Sprint. Away from the races for seven months, he came back with two fast wins at Remington Park. With speed to lay close, and a strong desire to get to the wire first, he is always a threat. The competition in here is tougher than he has seen since his comeback, but his class is already proven. Calvin Borel knows him well, and should get first run at the favorite. Consistent as They Come

8) X Y Jet (9-5) – On his best, such as in his four straight wins in South Florida from November to February, he is a deserving favorite and strictly the one to beat. The fastest horse in the field, he will try to take them gate to wire. After a strong effort when second in Dubai, he needed time to get over some physical issues. There was nothing wrong with his return to the races for trainer Jorge Navarro, but he did fade back to fifth in the Grade 1 Vosburgh. Despite some early speed in here, this race could come down to whether his is back to 100% for his second start back. As good as the top two are, though, anything less than his best likely sees him beaten again. Catch Me if You Can

SCRATCHED 4) Weekend Hideaway (8-1) – Looks to be the best chance of the rest to break up the party of the big three. The New York-bred has not run anything but well in his six starts so far in 2016. Like Ivan Fallunovalot, he will look to utilize his good tactical speed to lay close and pounce on the turn. This might be a little bit more than he has ever beaten before, but his record for trainer Phil Serpe demands respect. Best Chance at an Upset

SCRATCHED 5) Life in Shambles (15-1) – Two sharp wins in July and August at Belmont and Saratoga point out that he is now better than ever at the age of five. A failed attempt on the grass, followed by a troubled second-place finish in his last two bring him to Maryland on a small losing streak, but the style in which he won the two before that gives him at least a punter’s chance in this one. Improved Sort

1) Sonny Inspired (15-1) – A winner of a sprint stakes over this oval in January and March, he was last seen in a nine-furlong turf race in June. If the pace is fast, and it should be, and he is ready to roll off the layoff, he could be finishing fast -- probably not for the win, but quite possibly in a spot at the bottom of the trifecta or superfecta. Home Field Advantage

7) Rockinn On Bye (20-1) – Another of the locals, he has been knocking on the door without a win of late. In fact, while six times second or third, he is winless in nine starts this year. The good news is that his rally could be good enough to pass some on the way to cashing a check, but as far as winning, I cannot see it happening. Maybe for a Minor Share

6) Final Prospect (20-1) – A winner of only 1-of-10 this year, he is coming off a very solid effort in a sprint stakes at Delaware Park. That was only a four-horse field, though, and this one looks much tougher; too tough for him. Hard to Recommend

3) Pomeroy’s Package (20-1) – The horse most likely to try to go with X Y Jet early, he is going to have a hard time sticking with him. Even if he can for the first half mile, it is hard to imagine him shaking free to make any sort of challenge for the win. Burned Up Early