Cyber Secret - The most underrated horse in America 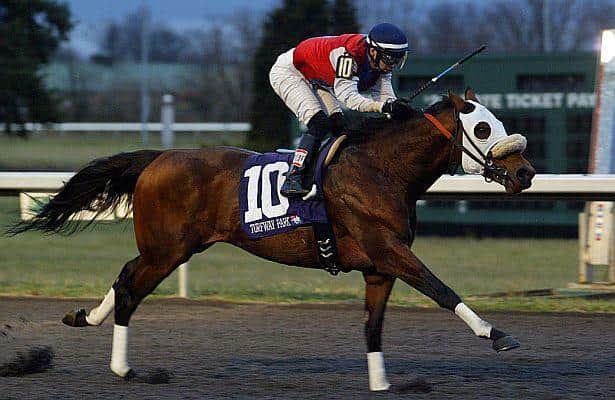 Question: Who is currently the most underrated horse in all of America? For your consideration, I humbly submit the name, Cyber Secret.

Cyber Secret is a multiple graded stakes winner, who less than eight months ago, despite very little fanfare, looked to be on the fast track to becoming one of the top older males in the nation. Unfortunately, he saw his rising star derailed soon after, by injury. After exactly half-a-year away from the races, the bay colt that romped home in the Grade 2 Oaklawn Handicap, in a field that included Fort Larned, is now back running, and looking very much like the colt we saw this spring.

After running a good second in a high-priced optional claimer on the turf at Churchill Downs in his return to the races, Cyber Secret returned to the winner’s circle yesterday in impressive style. Sent off as the 2-1 choice in the $50,000 Prairie Bayou Stakes at Turfway Park, the Lynn Whiting trained bay ran away from a full field of 12 to win by 4 ½ lengths over long shot, Stormy Going. Making the performance all the more noteworthy, was the final time. His final time for the 1 1/16 miles over the Northern Kentucky oval’s Polytrack was 1:42.26, breaking the previous track record of 1:42.52, which had stood since 2006.

Rider, Israel Ocampo came away impressed with his winning mount that was making only his second start on a synthetic surface.

“I had a perfect position, and when I turned for home I had plenty of horse left. I knew I could put him anywhere I wanted,” said Ocampo. “He handled the Polytrack really good. I worked him when he was a 2-year-old and he was pretty green. He’s getting more mature, relaxing more. I also worked him before he won the Oaklawn Handicap, and he’s even better today than he was then. I want to thank Mr. Cella (owner Charles Cella) and Mr. Whiting for giving me the opportunity to ride that kind of horse.”

If Ocampo is right, and he really is doing better than he was before the Oaklawn Handicap, that could spell trouble for his competition next year. Keep in mind that the son of Broken Vow, out of the Dixieland Band mare Stomping, not only won his fourth in a row when winning the Oaklawn Handicap, but it also earned a 109 Beyer.

Yesterday’s track record breaking performance raised his lifetime mark to seven wins in 17 starts, with earnings just a shade below the $600,000 mark.

As for what’s to come in 2014, it should come as no surprise that Cyber Secret will now head to the same track in which he dominated last year. Well, that and the fact that he’s owned by Oaklawn President, Charles J. Cella. I’m sure the Hot Springs locals will be happy to welcome back the horse that went four-for-four there in 2013.

According to Whiting, Oaklawn’s Fifth Season Stakes on January 11 will likely kick off what could be a very big season for the then five-year-old. He is, after all, the one I call the most underrated horse in America.