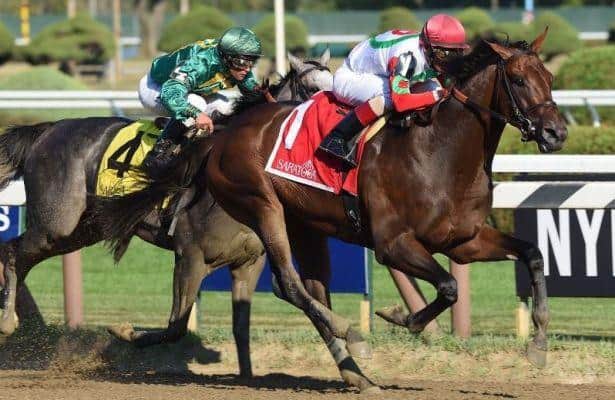 Arrogate is the epitome of a late-developing three-year-old making good in the second half of the racing season. No Triple Crown, no problem for the Bob Baffert-trained son of Unbridled’s Song. The enormity of his victories in the Travers and the Breeders’ Cup Classic virtually wrapped up the Eclipse Award as Male Three-year-old Champion. The sensational pair of wins also left the collective mouths of the racing world watering, wanting to see more from the still lightly raced star. While Arrogate has taken racing by storm, another talented and late-developing sophomore is on a similar path, if only on a slightly smaller scale. His name is Connect, and the strapping son of Curlin still has more to do before the 2016 season comes to a close.

Like Arrogate, Connect has made only six lifetime starts. Unlike the Classic winner, though, he did start once as a juvenile for owner Paul Pompa, Jr. and trainer, Chad Brown. The single third-place finish in an Aqueduct maiden last December let us in little to what he could someday become. I first heard about Connect soon after he broke his maiden this spring at Belmont Park. I was told that the recent maiden winner was on a short list of the most impressive horses among all the talent working mornings at Belmont.

Arrogate, who also finished third in his career debut four months after the debut of Connect, enjoyed his coming out party came in front of a large Saratoga crowd in the Travers. In the middle of the pack that day, and not quite ready for prime time, was Connect. His coming out party would come in his very next race.

Sent off at 10-1, Connect pulled a mild upset in one of the strongest fields assembled in the three-year-old division this year. To win the $1.25-million Pennsylvania Derby he had to fight off the always tough Gun Runner, after surging through an opening on the inside. No one else was really close that afternoon at Parx, but among those left in his wake were classic winners Nyquist and Exaggerator, as well as the multiple graded stakes winning, Cupid.

It was the second stakes win for Connect, who had beaten his talented stablemate, Gift Box in the Curlin Stakes, one start before the Travers. Now 4-for-5 this year, he looks to build upon the big win by adding a Grade 1 in a couple weeks.

I spoke with Connect’s trainer briefly this morning, and the Mechanicville, New York native told me that the good-looking son of Curlin is training great for his next assignment, which will come in two weeks, and during Thanksgiving weekend. Which race that will be is still to be decided. Widely assumed to be headed to the Cigar Mile on November 26 at Aqueduct, Brown said the Clark Handicap at Churchill Downs on the day before, is also being strongly considered.

Both races would offer an opportunity for his first Grade 1 win, an overall purse of $500,000, and his first chance against older horses. On the one hand, the Cigar Mile would mean staying home, but also a cutback to one mile and one-turn. If they do instead decide to ship to Louisville, Connect would stay at the same nine-furlong distance in which he scored in the Pennsylvania Derby, and continue running around two-turns.

If all goes well in either the Cigar Mile or the Clark, the $12 million-dollar Pegasus World Cup is a possibility. “I wouldn’t rule it out,” said Brown about the horse who seems primed to be a major player in the handicap division in 2017.

So while Arrogate is one of the most successful late-developing three-year-olds in recent memory, don’t forget about Connect. He has a big future too, starting with an important date soon after Thanksgiving.