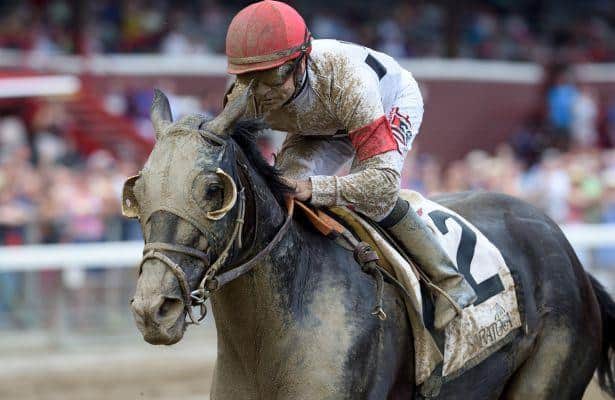 I just read that Stallwalkin Dude (pictured above) will carry high weight of 134 pounds in the Thanksgiving feature at Aqueduct, the Grade 2 Fall Highweight Handicap. It’s not quite like the heaviest imposts of the race that I remember from the old days, but at least it as an attempt to make this unique race still a bit unique. Thinking about what horses used to carry in this history rich sprint led me to looking back at the past of this race. I was happy to find a little piece of racing history that until today had escaped this racing historian.

Inaugurated in 1914, the first Fall Highweight was won by Comely. It’s a name probably familiar to most racing fans, but we’ll get into that more later.

In that first Fall Highweight, Comely carried only 110 pounds to the finish line at Belmont Park. It seems hardly a “high weight” at all, until you consider the circumstances of her victory. You see Comely was a filly, and a two-year-old filly at that. Taking on older males, her weight allowance was large, and so was the significance of her win. A James Butler homebred daughter of Disguise, Comely remains the only juvenile ever to win the Fall Highweight. It’s an achievement not likely to be matched anytime soon.

In other racing countries, the practice of running a juvenile against older horses in sprint stakes in not all that uncommon, but in the United States, I cannot remember that last time that it’s been done. For her achievement, and also finishing first or second in 15 of 22 lifetime races, the name of Comely lives on in modern racing.

Of course the reason we are familiar with the name Comely is because the Comely Handicap came to be 31 years after her victory in the Fall Highweight, and more than 70 years later still, it is a race that continues to carry a fair amount of importance on the New York racing schedule. Coincidently, or possibly not, the Grade 2 Comely has in recent years joined the Fall Highweight as a member of the excellent holiday weekend of stakes racing at the Big A.

As for the great weight carriers in the long history of the Fall Highweight, Mt. Livermore was the last runner to shoulder 140 pounds to victory. Trained by D. Wayne Lukas, back in 1985, the son of Blushing Groom became the eighth horse to carry 140 pounds and win the Fall Highweight. It marked the ninth and final win of the season for Mt. Livermore, but he was denied an Eclipse Award when Precisionist got his measure a few weeks later in the second edition of the Breeders’ Cup Sprint.