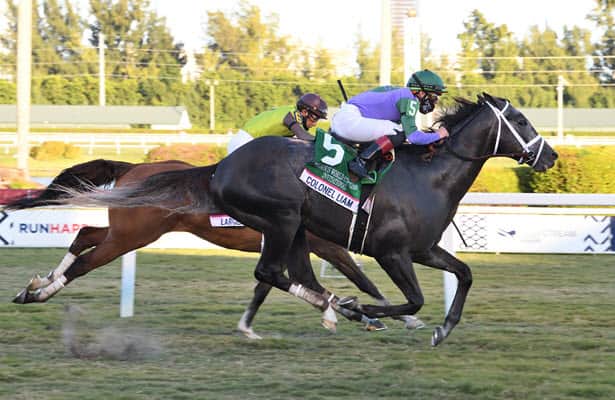 Last year at this time, Colonel Liam announced himself as one of America's top turf horses with a determined victory in the $1 million Pegasus World Cup Turf Invitational (G1). Things will be a little different this time around, but once again, the Todd Pletcher-trained son of Liam’s Map looks like the one to beat in the rich turf race.

Coming off an impressive victory in the Tropical Park Derby, Colonel Liam was primed for a big effort in the Pegasus Turf one year ago, and he delivered with a strong late finish to win the 1 3/16-mile race by a measured neck.

There will be no preps for this season’s edition, as the 5-year-old has been away from the races since a disappointing eighth-place finish in Belmont Park’s Manhattan (G1) on June 5. The distance of this year’s Pegasus will also be different, having been shortened to 1 1/8 miles for Saturday’s race from 1 3/16 miles last year.

The distance change should not be a problem for the gray horse who has won five of his seven career starts on the turf, including both tries on the Gulfstream Park lawn, but the nearly eight months off could be a bigger concern.

Saying he needed time off after the only poor performance of his career, returning in such a big race was not an accident for Colonel Liam, according to Pletcher.

“We’ve kind of had in mind that our best approach for him to try and defend his Turf title is just to train up to it. He had some time off and he’s a horse that we think will run well fresh,” the Hall of Fame trainer said. “He’s put enough into his training that hopefully we can have him ready to run a good race off the layoff.”

Supporting his stance of running well fresh, the last time Colonel Liam had a break was when he came back after 4 1/2 months away to win the Tropical Park Derby by 3 1/4 lengths going away. That win, on the day after Christmas in 2020, propelled the Robert and Lawana Low-owned horse to an impressive winning streak.

After his two wins at Gulfstream Park, Colonel Liam went to New Orleans and was clearly best in the Muniz Memorial Classic (G2) over future Grade 1 winner Two Emmys. After that, he ran another big race in the Turf Classic (G1) at Churchill Downs.

Doing the dirty work of wearing down an extremely game and classy Smooth Like Strait, he had just enough to hold on for a dead-heat victory against the powerhouse closing kick of Domestic Spending. It was the culmination of four strong performances in a row, and none of them were bigger than his win in last year’s Pegasus Turf.

Overcoming traffic concerns, the big horse swung to the outside and put it in high gear. He looked the part of a developing turf star – and he was, until his 2021 season ended abruptly.

A son of Liam’s Map, it seems he may have inherited many of his sire’s traits, and his grandsire’s for that matter. You’ll remember the sire of Colonel Liam was an extremely talented son of Unbridled’s Song, who himself was a unique talent.

At his best, Liam’s Map was nearly unstoppable. Evidence of this was underscored with a dominant, track record victory in the Breeders’ Cup Dirt Mile at Keeneland. Unfortunately, like his sire, he was full of talent, but not the soundest of athletes. Also trained by Pletcher, that striking victory in the Breeders’ Cup Dirt Mile was his final race of a career which only saw eight career starts.

Colonel Liam already has done one better. Saturday’s Pegasus Turf will be his 10th career start. Perhaps the kinder surface of turf will keep him going longer, but after more than eight months away, it’s fair to wonder just how many more starts we will see out of the talented grass horse.

Clearly best in the Pegasus World Cup Turf Invitational of last year, it has been a long wait to see what Colonel Liam could do when back on the track. The wait is over, and I am expecting big things. Now a mature 5-year-old, he could be even better this year.

As the horse to beat in this season’s million-dollar race, it’s not a matter of how good Colonel Liam is, but rather how many more races we will see the talented son of Liam’s Map run.