Tacitus shows he belongs in the Breeders' Cup Classic 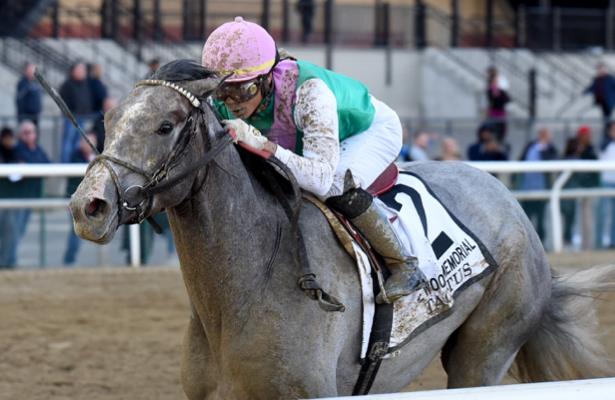 The losing streak is over. A portion of the fireworks heard ‘round the nation on July 4 emanated from Tacitus finally busting through a barrier that had been building for more than a year.

With the addition of blinkers and breaking from the rail in the Grade 2 Suburban Handicap at Belmont Park, the regally bred son Tapit was involved early before settling down kindly under the confident hands of rider John Velazquez. From there it was only a matter of time before Tacitus would completely take over the historic race.

The Juddmonte Farm homebred, a product of America’s top sire Tapit and the champion mare Close Hatches, romped home, winning by more than eight lengths in an excellent time of 1:59.51.

It was his first victory in 15 months. In the interim, seven tough races had come and gone.

Under the Hall of Fame care of trainer Bill Mott, Tacitus never failed to show up against some of the strongest competition dirt racing has to offer, but could never quite make it to the winner’s circle either. He certainly was an unlucky loser of last summer’s Jim Dandy (G2), and the same probably could be said of his runner-up finish in the 2019 Belmont Stakes (G1).

In all fairness, Saturday’s Suburban was likely the easiest competition he had faced since he put together a three-race winning streak closing out his juvenile season and beginning his sophomore year. You will remember, winning an Aqueduct maiden race at 2 was directly followed by good looking victories in the Tampa Bay Derby (G2) and the Wood Memorial (G2).

The 7-race losing streak was born with a good effort, but a losing one in the Kentucky Derby, but now, finally, Tacitus returned home a winner. The Suburban was not only his third Grade 2 victory, but it also should do a world of good for his confidence.

Sometimes we forget that Thoroughbred race horses are not machines. They have feelings and emotions just as we do. I suspect Saturday’s win should have plenty of positive mental impact for the talented and classy runner moving forward. I also believe it now sets a course for a serious run at the $7 million Breeders’ Cup Classic in November at Keeneland.

The same could have been said for the winner of last year’s Breeders' Cup Classic, Vino Rosso. In fact, the two horses have a lot in common.

Born one year apart, both were impeccably bred and physically talented. Tacitus and Vino Rosso each broke their maiden at Aqueduct in November of their juvenile seasons, before prepping for the Kentucky Derby in the Tampa Bay Derby and Wood Memorial. Both arrived in Louisville off a win in the Wood, but that was where the losing streak began.

Last year's Classic hero was put away earlier in his 3-year-old season and broke his losing streak sooner than Tacitus when he found lesser competition in the listed Stymie, but I believe his true breakout came when he won the 10 furlong Gold Cup at Santa Anita (G1) in his third start as an older horse.

I suspect what Tacitus did in the Suburban can be much like what Vino Rosso got out of that win late last spring in California. Now, also three starts into his 4-year-old season, the Breeders’ Cup Classic beckons, and I believe Tacitus will be ready.

He likely will find a more difficult field than Vino Rosso did, but much like that one, he should be ready for the classic distance when it’s all on the line.

For the time being, it’s all about getting the handsome gray to the big race in November.

Upstate New York and Saratoga will likely be next for Tacitus. The Grade 1 Whitney is on August 1, then five weeks later the Spa will host the Grade 1 Woodward. The latter is 10 furlongs this year and could likely be the more attractive of the two, as opposed to the 9 furlong Whitney. After that, there is the Grade 1 Jockey Club Gold Cup at the same track and distance as the Suburban in October.

It’s pretty clear that Tacitus is very comfortable at the classic distance of 1 ¼ miles, and that is something that few horses in America can say these days.

There are currently higher rated dirt horses out there, but armed with maturity, a new focus with addition of the blinkers, and plenty of confidence from his Suburban romp, I expect Tacitus to be on a short list of horses to beat when the Breeders’ Cup Classic rolls around in four short months.