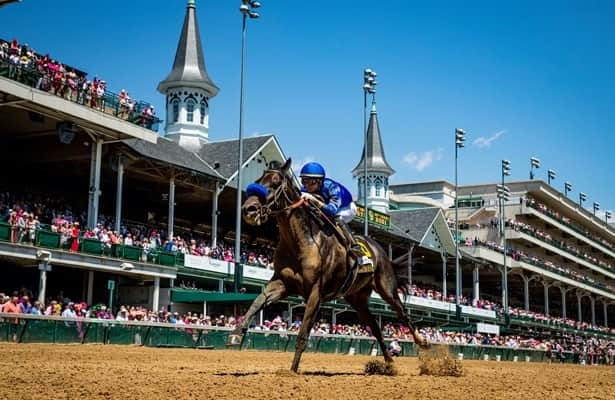 There will be one last test for Maxfield before calling it a career, and it is a big one. Not only will the 4-year-old Godolphin homebred put his perfect record at Churchill Downs on the line in Friday’s Grade 1, $750,000 Clark Stakes, but he is looking to defeat the deepest field he has ever beaten to do it.

The Grade 1-winning son of Street Sense will make his final appearance in the holiday headliner, and will then head to Jonabell Farm to begin his stallion career for Darley Stud.

In a career which has seen its share of highlights, there is also the sense of unfinished business for Maxfield. For various reasons, the Brendan Walsh-trained runner never got the chance to run in the Kentucky Derby or Breeders’ Cup, but has long been considered one of the best dirt horses around.

In 10 career starts, Maxfield has never finished out of the money. Six of his seven career victories have come in stakes races, but to date he only has one Grade 1 victory, which came way back in October 2019 when winning the Breeders’ Futurity (G1).

That lone win in racing’s highest class came over an hour due east at Keeneland, but it is under the famed Twin Spires of Churchill Downs where Maxfield has forged his lofty reputation. A debut winner at the Louisville oval Sept.14, 2019, he is perfect in four career starts at the home of the Kentucky Derby.

The handsome dark bay certainly looked like a true Grade 1 performer with powerful wins over his favorite track this spring and summer when cruising home an easy victor in both the Alysheba Stakes (G2) and Stephen Foster Stakes (G2), but neither came against fields like he will see Friday.

Led by the classy 3-year-old Midnight Bourbon, and also expected to include graded stakes winners Code of Honor, Independence Hall, Happy Saver, and King Fury, the Clark field should give Maxfield a real test as he makes his swan song.

A son of Tiznow, trained by Steve Asmussen, Midnight Bourbon has been a hickory type since making his debut last July at Ellis Park. He has competed in 10 consecutive graded stakes races in the last 14 months, and has finished second in the Preakness, Travers (G1) and the Pennsylvania Derby (G1) in the last three races which he has finished. He also could be the controlling speed in the Clark.

Besides Midnight Bourbon, Code of Honor and Happy Saver are both Grade 1 winners and Independence Hall and King Fury are each dangerous runners, who on their best can beat just about anyone.

The Clark promises to be a true Grade 1 test, but this is Churchill Downs. It is Maxfield’s house, and he is the one they will all have to beat. His record and performances at his home track have been impeccable and he looks ready to defend his home turf.

Having said that, he will enter the Clark starting gate in the midst of his first career losing streak.

In August, Maxfield was second in the Whitney Stakes (G1) at Saratoga. The soon-to-be Horse of the Year Knicks Go was loose on the lead that day, and nobody was going to catch him.

He got closer in the Woodward Stakes (G1) eight weeks later at Belmont Park, but once again a talented speed horse, Art Collector, had things his own way early and the Godolphin runner settled for the runner-up position.

The threat of Midnight Bourbon loping along on a relatively easy lead in the Clark is certainly a possibility, but there are a couple of horses – most notably Independence Hall – who could pressure him early.

And then you have the Churchill Downs factor. Maxfield is a very good horse elsewhere, but he is simply a better horse at his home track.

It looks like Maxfield will have his hands full on Friday, but at his best, I believe he wins this, and if he does, his final career race will also be his biggest career victory. It would be the perfect way to put a stamp on an excellent career.

Meet Brian Zipse
Brian has been a passionate fan of horse racing his entire life. Taken to the races at a very young age, he has been lucky enough to see all the greats in person from Secretariat, Forego, and Ruffian through Rachel Alexandra, Zenyatta, American Pharoah and Justify. Before coming to HRN, Brian displayed his love for the sport through the development of his horse racing website, which quickly became one of the most popular blogs in the game. His racing partnership venture, Derby Day Racing, invites more fans to experience the thrill of racehorse ownership.
The Editor of Horse Racing Nation from 2010-2017, Brian authored a daily column as Zipse at the Track, created the popular racing webcast HorseCenter, and added his editorial flare to the overall content of the website. Now a Senior Writer for HRN, Brian continues to contribute his thoughts on racing, as well as hosting HorseCenter. A big supporter of thoroughbred aftercare, he serves on the Board of The Exceller Fund.
Brian's work has also been published on several leading industry sites. He has consulted for leading contest site Derby Wars and is a Vox Populi committee member. He is a voter for racing's Hall of Fame, as well as a weekly NTRA poll voter.
A horse owner and graduate of DePaul University, Brian lives just outside of Louisville with his wife Candice and daughter Kendra.
ZATT's Star of the Week
Obligatory