Zipse: Ce Ce is on path to another Breeders' Cup win 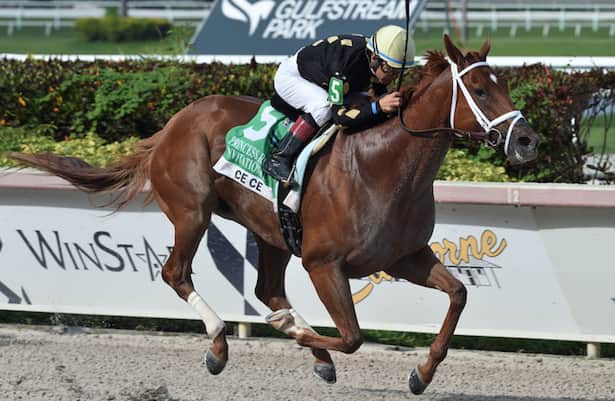 Looking at the big races of the weekend, Sunday’s Grade 3 Chillingworth Stakes at Santa Anita does not jump off the page as one of the races to watch. It did, however, produce a Breeders’ Cup champion last year, and it very well could do it again this year. The reason for that is Ce Ce.

The champion female sprinter of 2021 used a sharp win in the Chillingworth as a springboard to a victory five weeks later in the Breeders’ Cup Filly & Mare Sprint on her way to taking home her first Eclipse Award.

Ce Ce is back to defend her title in the Chillingworth, as the 6-year-old daughter of Elusive Quality faces five others in the 6 1/2-furlong Breeders’ Cup prep. And just like last year, she is not the female sprinter most handicappers are talking about in advance of the World Championships.

Last year it was Gamine. This year, Ce Ce likely will have to face the likes of Goodnight Olive, Echo Zulu and Kimari if she is to win again at the Breeders’ Cup.

Although the Filly & Mare Sprint is once again the goal, the Chillingworth comes first. Ce Ce could not have looked much better in winning this race last season for trainer Michael McCarthy and owner/breeder Bo Hirsch.

It turned out to be an ideal prep for the world championships. Her path to the Breeders’ Cup, which will be held at Keeneland this year, actually matches last season.

Just as in 2021, she came out of a two-turn defeat, before an emphatic win in the Princess Rooney (G2) at Gulfstream Park, followed by a disappointment in Saratoga’s Ballerina (G1). Last year, the Chillingworth was her rebound race before winning the big one at Del Mar at odds of 6-1.

The five-length victory in the Chillingworth last season sent her to Del Mar in a good way, and she responded with a sweeping move that carried her past the heavily favored Gamine on the way to her most important career victory under her regular rider Victor Espinoza.

That was Ce Ce at her absolute best. If you’ve been following her career the last four seasons, you know that the top race mare occasionally will throw in a mediocre effort.

She has done it on several occasions, but she is also good enough to sport an excellent lifetime record of 21: 10-2-4. Ce Ce also has banked just a few dollars short of $2.3 million.

As good as she often is, there have been those occasional head-scratching efforts that have left us wondering what happened to her. Certainly, her most recent race in the Ballerina was one of her sub-par performances.

Run at seven furlongs at Saratoga, you would think the Grade 1 race on Travers day would be tailor made for Ce Ce, but an average third in the race in last year’s edition tells us differently. This year, she did even less. It’s likely that she just does not care for Saratoga.

The fifth-place result was admittedly a stinker, but the truth is, Ce Ce simply has thrown in some uncharacteristic races during her career. She always has bounced back, though, and the poor effort is exactly why she is currently well down the list of female sprinters this year.

Currently at 14-1 on overseas markets to win the Breeders’ Cup Filly & Mare Sprint next month at Keeneland, I believe Ce Ce offers fantastic value. Those odds are likely to dip if she follows last year’s pattern of rolling in the Princess Rooney, losing the Ballerina and then winning the Chillingworth.

Coming from off the pace at 7 furlongs is what the Michael McCarthy-trained mare was born to do, and I really like her chances to finish strongly and win another Eclipse award this year.

The 2022 edition of the Breeders’ Cup Filly & Mare Sprint likely will feature a deeper field than it did last year. But when Ce Ce is good, as she was two races ago at Gulfstream Park, she is championship quality. I fully expect to see that quality in Sunday’s Chillingworth Stakes.