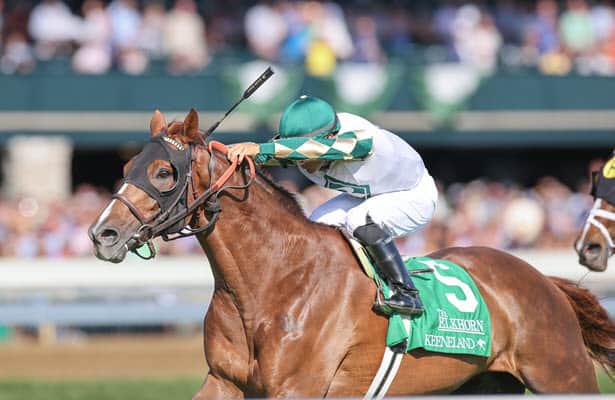 John Henry he isn’t, but don’t tell that to the 8-year-old turf star Channel Maker. Bred in Canada, the champion son of English Channel has never seen a stretch battle that he didn’t like. More proof of that came on Friday at Belmont Park.

Sent off as the 6-5 favorite against tough turf horses in the Grand Couturier Stakes, the veteran reminded us why he can never be counted out of any turf race.

Off to a good start this time, the veteran went to the front and asked his younger competition if they could catch him. The answer would be no.

First Highest Honor and then Soldier Rising tried the Bill Mott-trained runner. If you hadn’t been watching all these years, you would have thought the latter had him dead to rights in the stretch. No sir.

Channel Maker dug down deep under rider Luis Saez and would not let the horse half his age pass him by.

A full brother to Canadian champion Johnny Bear, Channel Maker has been doing this for a long time – seven seasons now, to be exact.

He was given time off after his fifth-place finish behind Yibir in last fall's Breeders' Cup Turf (G1) and has returned in style. He won the Elkhorn Stakes (G2) at Keeneland in his return race before blowing the break and never threatening in the Manhattan (G1). Now 2-of-3 for 2022, Channel Maker shows no sign of slowing down.

In fact, he looks destined to make a run at the Breeders’ Cup for what would be a remarkable sixth time.

Although it would seem the 8-year-old turf champion of 2020 – and Canada’s champion 3-year-old of 2017 – could not have less in common with the 3-year-old dirt filly Interstatedaydream, they do share one trait: Both were bred in Ontario.

Rolling with what Channel Maker had started on Friday, Interstatedaydream made it a very big two-day stretch for Canadian-breds in the U.S. with a convincing score in Saturday’s Indiana Oaks (G3).

Ridden by Florent Geroux, she also looked to be in trouble early in the lane at Horseshoe Indianapolis, only to show heart and class to easily turn away the challenge of Runaway Wife in the late going. It was a long way back to the rest of the field as the daughter of Classic Empire scored her second consecutive graded-stakes tally.

It remains to be seen whether Interstatedaydream will ever become a champion like Channel Maker, but the Brad Cox-trained filly is off to a very good start.

A $175,000 2-year-old-in-training purchase at Ocala last April, she made it to the races early in her career with a game win at Belmont Park in her debut last June. A second-place finish soon followed in the Adirondack Stakes (G2) at Saratoga, but then we didn’t see the Flurry Racing Stable-owned filly for some time.

At 3, she returned even better, drawing away for an 8 1/4-length victory in allowance company at Oaklawn Park after a seven-month layoff. It’s been nothing but graded stakes for her since.

She wasn’t quite up to the challenge of Nest in the Ashland (G1) in her second start back, finishing a well-beaten third, but she has continued to improve with clear-cut victories in the Black-Eyed Susan (G2) at Pimlico in May and Saturday’s Indiana Oaks.

Secret Oath and Nest remain the big girls in the division, but this Canada-bred, who has won 4-of-6 lifetime, is clearly quickly moving up the ranks.

Two years ago, the Indiana Oaks was a coming-out party of sorts for her older stablemate Shedaresthedevil, and now Interstatedaydream will look to follow suit. The $1 million Cotillion Stakes (G1) in September at Parx could be next.

The old pro Channel Maker got it done at Belmont Park, and the fresh up-and-comer Interstatedaydream responded in Indiana. It turned out to be a very good two days for the Ontario-breds.