Celebrating the Best of the Breeders’ Cup Non-Winners 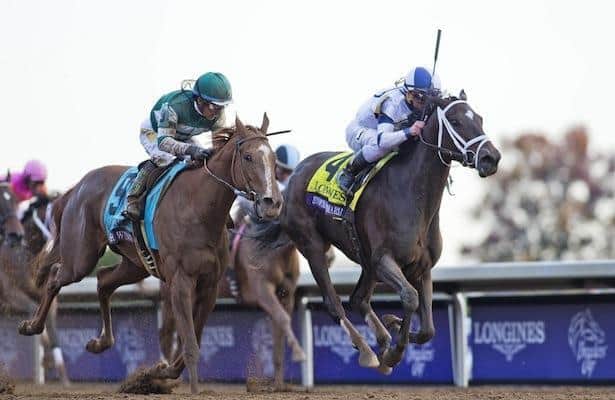 There were 13 winners of Breeders’ Cup races at Keeneland recently, and without question, these horses deserve all the attention and accolades they are receiving. Also deservedly so, of all the big winners, American Pharoah is getting the most press. His accomplishments warrant that, after all, but what about the horses that did not hit the finish line first. Losers, disappointments and afterthoughts? I don’t think so. Many of these horse deserve some love and respect for the outstanding races they ran in losing efforts. Here are several of my favorites from the lot …

Let’s start with Swipe - It’s hard not to feel just a little bad for the son of Birdstone. Four times he ran against the soon to be juvenile champion, and four times he went down to defeat at the hands of Nyquist. Clearly, that one is a better two-year-old. The good news for fans of Swipe, is that considering his long-winded sire, there is good reason to believe that he will only get better as the distances get longer. As for his performance in the BC Juvenile, it was first rate. He bumped horses coming out of his outside post position, before settling near the back of the pack in the large field. From there, he had little trouble navigating horses from the outside, and while he never looked like a winner, the way he finished full of run, to get within half a length on the wire, points him out as a legitimate horse to watch on the road to the 2016 Kentucky Derby.

Stellar Wind - She won four stakes this year in California, but there can be little doubt that the daughter of Curlin ran her best race in the Breeders’ Cup Distaff. Not only did she have to race wide much of the way, but the logjam coming out of the far turn pushed her about eight wide. Losing ground, or not, she still could easily have been a winner had the horse she was trying to run down not come out on her a few times down the lane. Take nothing away from the game Stopchargingmaria, but considering that Stellar Wind kept coming, ultimately only losing by a neck, makes me think that despite the wide trip, the younger filly may have won had both run a straight path down the Keeneland stretch.

Airoforce - Part of a 14-horse field, and in between horses for most of the way is generally a recipe for disaster for a horse with such little experience as Airoforce had going into the Breeders’ Cup Juvenile Turf. Still, he had a ton of run down the lane in only his third lifetime race. It looked like Birchwood had the jump on him early in the stretch, but the Mark Casse trainee dug down and outdueled that one to the wire. The only problem being that Hit It a Bomb had even more momentum on the far outside. Even then, Airoforce, in between horses, did not make it easy on the more experienced European. They say dirt will be next, and after this one, I can’t wait to see more from this son of Colonel John.

Private Zone - Sure, Runhappy did not go head-and-head with him early, like I thought could happen, but still, Private Zone did not have things his own way. Flashing his normal speed, he zoomed right up for the lead from his far outside post. That could have worked out really well had Holy Boss not been so intent on getting the early lead. The six-year-old gelding was wrangled back a little bit, mind you just a little bit, by his rider, as not to get into a suicidal duel. This alone could have taken a little starch out of the star sprinter, but he persevered, and led most of the stretch, until succumbing late to his young rival. Of the two, I thought the winner had the better trip. Runhappy deserved the win, but Private Zone, as usual, ran an excellent race.

La Verdad - Going in, I did not think La Verdad could beat the best female sprinters at the extended sprint distance of seven furlongs. I was right, but in the end, I gained a whole new respect for the mare who came in 6-for-6 in 2015. She proved faster than a pair of very fast fillies in Taris and Stonetastic, as they both tried to get her at different stages of the race. She was resolute, though, and in the end, I believe it was the distance that got her every bit as much as the powerful late winning rally of Wavell Avenue. Still a leader after 6 ½ furlongs, I thought it was a big performance, and one that combined with the rest of her stellar year, is enough to earn a year-end championship.

Legatissimo - Stephanie’s Kitten ran big and was a popular winner of the Breeders’ Cup Filly & Mare Turf, but maybe, just maybe, it was the three-year-old filly from Europe who was indeed best. While the holes opened at the right time for the winner, Legatissimo had to swing many paths out after being on the inside for much of the race. The way she finished full of run, it would have been interesting to see what would have happened had she not lost the ground, and gotten a more similar trip to the winner. Or perhaps, she lost the race one jump from the starting gate, when she went down to her nose. Any way you slice it, Europe’s Champion 3yo Filly ran a huge race at Keeneland.

Lady Shipman - The Turf Sprint might not be the biggest of the Breeders’ Cup extravaganza, but it is the most important race we have for an enjoyable division of horses. All credit to the winner, Mongolian Saturday, but there can be no doubt that the three-year-old filly ran a monster race. She led early, relinquished the lead to have something left late, and the strategy almost worked. Lady Shipman was bumped, swung off the rail, and had plenty of work to do to try to catch the winner, but the little filly sure enough almost did it.

Rachel’s Valentina - Being no match for Songbird is by no reason a time to hang your head. Rachel’s only daughter had an excellent juvenile season in only three races. She came from off the pace to win at first asking at Saratoga. She became a Grade 1 winner in her second career start by winning the Spinaway. And then, in her third career start, and her first around two-turns, she was clearly second best in the Breeders’ Cup Juvenile Fillies. Frankly, we don’t see many two-year-old fillies the likes of Songbird. It all makes me feel very good about the future prospects of Rachel’s Valentina.

Golden Horn - Wait a minute, wasn’t he upset at odds of 4-5? That’s true, but I like his race in the Breeders’ Cup Turf for two reasons. First of all, he ran a very good race, and it took a huge effort to beat him. He was the first one to piunce, and Found had the momentum to his outside, and though game, he came home second best. Furthermore, I think it was extremely sporting of his connections to run him here in the first place. He already won a number of huge races in Europe, most notably the Epsom Derby and the Prix de l’Arc de Triomphe. It would have been easy for the world’s best turf horse to pass on the big turf race in America. Instead, they brought him over, and like all other Arc winners who have tried before him, he was defeated, but like I said, he ran a very good race.

And finally … Effinex - Yes, I know American Pharoah won America’s richest race in a romp, but for the New York-bred to finish 4 ½ lengths or more ahead of horses like Honor Code, Tonalist, Keen Ice, and Frosted, well, that’s just plain impressive. I don’t see him as a likely winner of the Older Male Championship, but with performances like this one and the Suburban, in which he nosed out Tonalist, maybe he should be in the discussion. In the Classic, he was the one to stay closest to Pharaoh early, and instead of packing in the tent at the top of the lane, he outfinished everyone else. It was his best career race to date.