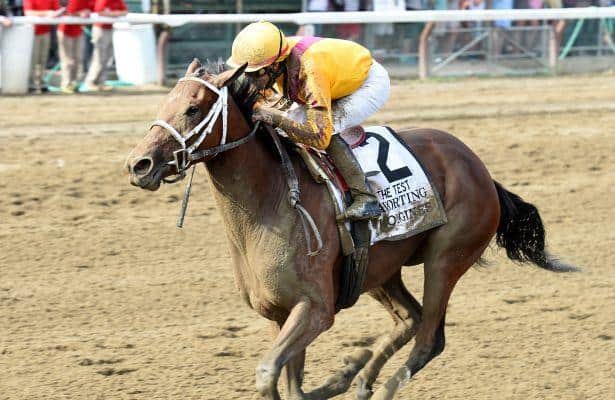 On paper, today’s Grade 1 Test appeared to have the potential to be a wide open affair, but apparently no one told the race favorite, Cavorting. Building on her impressive victory on Belmont Stakes weekend in the Jersey Girl Stakes, the Kiaran McLaughlin-trained filly found another gear in mid-stretch to explode right on by Bar of Gold to win the prestigious seven furlong event at Saratoga by 2 ½ powerful lengths.

Returning champion Take Charge Brandi broke quickly and zipped right out to the early lead. To her outside, the 15-1 outsider Bar of Gold was more than willing to keep that one company through early splits of :23.21 and :46.21. Meanwhile, Cavorting, under Irad Ortiz, Jr. was biding her time near the back of the ten-horse field. Take Charge Brandi continued to lead the Test into the far turn, but Bar of Gold was poised and ready to pounce, and pounce she did, as last year’s juvenile filly champion deployed the parachute at the top of the lane. Now in the middle of the pack, Cavorting was being angled off the rail for the stretch, but she would need plenty of rally because Bar of Gold looked strong as she opened up a clear advantage early in the Saratoga lane.

For a while in the stretch it looked like the New York-bred Bar of Gold might be home free, but her strong bid for a grade 1 upset was short-lived, as the favorite, in the familiar gold and burgundy colored silks of Stonestreet Stables, suddenly emerged from the pack. Cavorting had a full head of steam, leaving the long shot leader with few answers in the race to the wire. As they hit the finish line, it was Cavorting going away over Bar of Gold, who easily held off the Grade 1 winner, By The Moon, for second place money by nearly two lengths. Irish Jasper came from last, but her late run was only enough to fill out the superfecta.

Apparently, the winning rider was never worried about being behind for most of the race. "I had the perfect trip,” said Ortiz. “The trainer told me before the race to relax her and stay steady in the back. We had a strong pace in the front and when we turned the corner, I just let her go."

Winning trainer, Kiaran Mclaughlin, praised both filly and rider after the victory. "I thought it would be a faster pace early, but it worked out well,” said McLaughlin. “I knew she was running and was hoping she would get space to run. She normally doesn't like a lot of dirt in her face but she was covered in dirt today. Irad rode a great race and she ran huge. She deserves a Grade 1 win and she got it. She's a very nice filly."

For Cavorting, the big victory in the Test raised her lifetime record to 6-4-0-0, which includes a perfect 4-for-4 record in races under a mile. The daughter of Bernardini and Promenade Girl has also now accounted for three stakes wins in her brief career. Last summer at Saratoga, Cavorting scored with a strong win in the Grade 2 Adirondack Stakes.