Can Ginobili bring his 'A' game to the Big A for Cigar Mile? 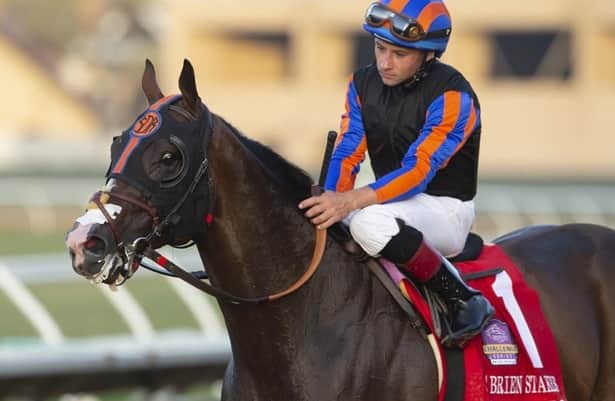 Among America’s most notable tracks, there are few farther apart than Aqueduct and Del Mar. Geographically speaking, they are a nation apart, and they might as well be a world apart in nearly every other aspect.

These vast differences between the two tracks could present a problem for Ginobili when he raids the Big A as one of the favorites for Saturday’s Grade 1 Cigar Mile.

A $35,000 bargain at the 2018 Keeneland September Yearling Sale, Ginobili showed signs of talent early on for trainer Richard Baltas. He broke his maiden nicely second time out before a fourth-place finish in the Del Mar Futurity (G1). In that maiden, he defeated future Grade 1 winner Honor A.P. by 2 1/2-lengths. The impressive win came at Del Mar.

As it turns out, there’s just something about Del Mar for Ginobili. Not only have all of his wins come at the Pacific Coast oasis, but that is where he recently proved himself at the highest level by finishing second to the sensational Life Is Good in the Breeders’ Cup Dirt Mile.

Aqueduct does have very good racing, though. In the early spring there is the Wood Memorial (G2). In late fall, the Cigar Mile. There might be no superstars in this year’s edition, but six days out, the $750,000 affair looks to be shaping up as a wide-open and deep race worthy of Grade 1 status.

Off his last three races, Ginobili certainly looks to be one of the biggest players, but of course, all three came at Del Mar.

He was able to finish a solid second behind Nadal in the San Vicente (G2) at Santa Anita, but 2020 was a largely disappointing 3-year-old season for Ginobili. He went 0-for-5, and his only race at Del Mar came on the turf.

During an eight-month layoff, the son of Munnings had minor surgery to repair an ankle chip before returning in May. His losing streak continued with a pair of out-of-the money finishes at Santa Anita, one on the turf and one on the dirt.

For his third start of 2021, Ginobili returned to his favorite track. He also donned blinkers for the first time and stretched out to one mile. The combination turned out to be lightning in a bottle for the bay gelding, as he decimated his opposition, winning by nearly 10 lengths, while earning a career-best 104 Beyer Speed Figure.

Perhaps proving that stretching out to a mile for the first time was the least important factor of the three, he followed that impressive performance effort by easily handling top sprinters C Z Rocket and Flagstaff in the 7 furlong Pat O'Brien (G2) under rider Drayden Van Dyke.

That effort was not only his first graded stakes win, but also strong enough for the 4-year-old colt to be entered in the $1 million Breeders’ Cup Dirt Mile. On Nov. 6, Ginobili was no match for Life Is Good, but he turned in another strong effort at Del Mar while second best.

With good tactical speed, a strong turn of foot, and now tested for class, it would seem that Ginobili has all the tools necessary to win a race such as the Cigar Mile, but the question remains: Can he win away from Del Mar?

Partially owned by Baltas, along with Slam Dunk Racing, Richard McClanahan and Michael Nentwig, Ginobili is named for former NBA star Manu Ginobili. A native of Argentina, the namesake of the graded-stakes winner was able to take his excellent game wherever he went. A star all over the globe while winning multiple NBA championships and an Olympic gold medal, he certainly was not afraid to travel.

We don’t know yet whether the same could be said for Ginobili the horse. Perhaps he is a horse for course and needs Del Mar to be at his best. Or perhaps blinkers, maturity and health have finally brought out his best.

If he can continue the form he has displayed in his last three races, he has a big chance to become a Grade 1 winner in the Cigar Mile, and as a gelding, we could have a lot to look forward to from Ginobili. But first we need to see if he can bring his “A” game to a track about as different from Del Mar as there could be.