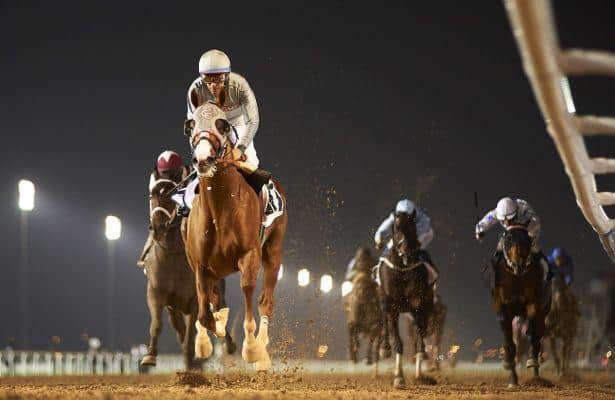 He was already a member, but with his sensational, saddle-slipping victory in Saturday’s Dubai World Cup, California Chrome has pushed his name farther up the list of the all-time greatest thoroughbreds ever to come out of the state of California. Without a true signature win after his Kentucky Derby and Preakness victories of 2014, the Art Sherman trained champion needed to show the world just how good he really is, to take his rightful place among racing’s elite. He did that under the lights of Meydan in a big way. Without further ado, here is my short list of California’s greatest, according to me, and listed in alphabetical order only – and yes, for sake of brevity, I know I am leaving off plenty of good ones. I invite you to tell me about your favorite California-breds from over the years.

Best Pal – As good as he was, for as long as he was, it’s quite amazing that the 1988 foal was never an Eclipse Award winner. Still, there can be no doubting his class. An 18-time winner over six seasons plus, that seventh season consisted of only one race. In his first six seasons, the gelded son of Habitony was a graded stakes winner each year. Second in the 1991 Kentucky Derby, Best Pal won all the big races in California, and was awarded the ultimate honor when elected to Racing’s Hall of Fame in 2010.

California Chrome – Now the richest horse in North American history, the son of Lucky Pulpit appears to be primed for another big year, after missing much of his four-year-old season. A winner of 12-of-21 lifetime, California Chrome has now won three of the most important dirt races in the world, and each was in convincing fashion. He will not get another chance at the Belmont, but his fast closing third in the 2014 Breeders’ Cup Classic is another race in which he should have the opportunity to add to his growing resume. With more than $12.5 million already in the bank, the story of this ultra-popular horse is far from complete.

Determine – The oldest horse on this list, Determine was the first gray to win the Kentucky Derby, when he scored on the first Saturday in May of 1954. The son of Alibhai was much more than just a Derby winner, though. Like Best Pal, an 18-race winner, Determine crammed in 15 races in his three-year-old season, winning 10 times, most of them important stakes races. The diminutive runner came back at four to win four more stakes races before his retirement. He carried over his success to stud, most notably with his son Decidedly, who won the Derby eight years after he had.

Flying Paster – Born the wrong year, the son of Gummo was a dominant runner in his home state, that is, until Spectacular Bid came to town. Second fiddle to one of America’s greatest runners of all-time, Flying Paster still managed to win 13-of-27 lifetime, despite being defeated by The Bid on six occasions. He was the first juvenile ever to be named California’s Horse of the Year, and was a multiple graded stakes winner at 2, 3, and 5. At 4, he finished second to the great one in four consecutive important races in California. If he had been born a different year, who knows how much he would have accomplished.

Free House – The most consistent antagonist during Silver Charm’s run at a Triple Crown in 1997, Free House was much more than Charm’s #1 rival. First off, he was a horse who finished in the money in all three legs of the Triple Crown. He was also able to maintain his excellence throughout his entire racing career. A winner of the Grade 2 Norfolk (now the Grade 1 FrontRunner) as a juvenile, Free House was able to win California’s biggest races in each of his four seasons on the racetrack. He scored in the Santa Anita Derby at three, the Pacific Classic at four, and the Big Cap at five. He was also able to beat his Triple Crown nemesis on three noteworthy occasions.

Hill Rise – The winner of 15-of-43, Hill Rise was not only a big winner in the U.S., but also a Champion in England. Narrowly beaten by Northern Dancer in the Kentucky Derby in a race he was actually favored, the powerful son of Hillary continued to be a big winner in California and the U.S. on both dirt and turf through his five-year-old season. He was so successful that in his six-year-old season, his connections brought him to Europe to run in some of the most important races in the U.K. He responded with several big efforts, including two important wins at Ascot which earned him the honor as Britain’s Top Miler.

Lava Man – A true rags to riches story, Lava Man went from claimer to a two-time California Horse of the Year. From meager beginnings the grandson of Seattle Slew improved to the point to where he was a dominant figure in the West on any surface, and at multiple distances. Among his 17 wins from 47 starts, and better than $5 million in career earnings, the gelding accounted for a Pacific Classic, two Big Caps, and three Hollywood Gold Cups. Now a popular pony, Lava Man raced until the age of eight.

Native Diver – A member of Racing’s Hall of Fame since 1978, Native Diver was the true Iron Horse of California Racing. After winning his first three starts in impressive fashion, he became a stakes winner in six consecutive seasons. Sprinting to routing, carrying big weight, setting track records, in other words, doing it all, the gelded son of Imbros won 34 stakes races all told. Like Lava Man, he won the Hollywood Gold Cup three times, and won at all six of California’s major tracks of his day. 37-of-81 lifetime, Native Diver was the West Coast’s most popular horse for much of his career, which concluded with a 6-of-13 season at the age of eight.

Snow Chief – The Eclipse Award winning juvenile of 1985, Snow Chief was the first horse to be recognized as California’s best three straight seasons, which accounted for his entire career. The beaten favorite in the Kentucky Derby, he bounced back to win the Preakness in impressive fashion, besting his top rival Ferdinand. A winner of 13-of-24 lifetime, the son of Reflected Glory was a multiple graded stakes winner in each of his three seasons, and collected nearly $4 million in earnings before his retirement in 1987.

Swaps – Perhaps the greatest California-bred of all-time, Swaps, was one of the most brilliant runners in American history. In total, the son of Khaled won 19 times in 25 career races. Not at his healthy best for the famous match-race with another great, Nashua, Swaps had gotten the measure of his rival with an impressive display of speed in the 1955 Kentucky Derby. Foot problems would bother him for much of his career, but it was hard to tell from his results. A major weight carrier, Swaps won eight times at both three and four, but the most impressive thing of all was that he managed to break or tie an amazing six world records during his memorable career.

Tiznow – As a back-to-back winner of the Breeders’ Cup Classic, the legacy of Tiznow will forever be safe. Still the only horse to have won twice in America’s richest race, the son of Cee’s Tizzy came on to the scene a little too late for a Triple Crown run, but once he got going, he was a hard horse to keep down.  A winner of 8-of-15, and better than $6.4 million, Tiznow was able to lay it all on the line on the biggest of stages, twice looking like he would be beaten in the Breeders’ Cup, he managed to dig down deep on both occasions to pull out the victory. After his second career BC Classic win, he retired as an American hero. He was inducted into Racing’s Hall of Fame in 2009.