California Chrome beat her, but Lexie Lou is still a Champ 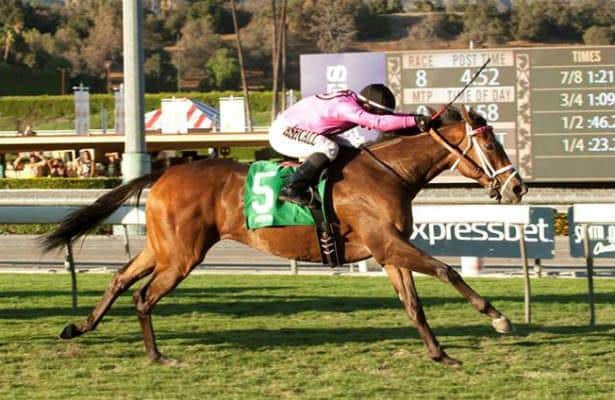 As soon as California Chrome crossed the wire a relatively easy winner of the Hollywood Derby on the Del Mar turf ten days ago, the talk began. Fans were impressed that his fourth Grade 1 win of the year came in his turf debut. Many, including yours truly, believe the win was enough to push him over the top in the Horse of the Year race. Doubters persisted, though, saying that the race was not of high quality. But what of the game filly who finished a hard trying second in the Grade 1 race against the boys? What about Lexie Lou?

Well, she’s a champion to start off with. Or at least, she will be a champion when the Sovereign Awards for Canada’s best of 2014 are announced next April.

A winner of 3-of-8, including two stakes races as a juvenile, the daughter of Sligo Bay got off to a slow start this year. In consecutive stakes sprints at her home base of Woodbine, she checked in 4th and 3rd. The second of which came for her new connections, of owner, Gary Barber, and trainer, Mark Casse. It wasn’t until she stretched out for the nine furlong Woodbine Oaks that the real Lexie Lou was revealed.

Stalking the pace as the 3-1 second choice in the field of nine, she waited until the turn to pounce under Patrick Husbands. When she struck, she quickly demonstrated her superiority over the other Canadian fillies. By the time the Oaks field hit the wire, it was Lexie Lou all alone.

Off the big win, her connections wheeled her right back three weeks later in Canada’s most prestigious race. She was not the favorite against the boys in the Queen’s Plate, but at 3-1, Lexie Lou was shown plenty of respect in the 15-horse field which included We Miss Artie, Ami’s Holiday, Asserting Bear, and Coltimus Prime.

Farther back than usual in the large field, she moved up on the backstretch from her ninth place early position, and by the time the field hit the far turn, she was moving into contention. Husbands, wearing the pink silks that so many in the Woodbine crowd were rooting for, kept the filly clear, and on the outside, and she did the rest in valiant fashion.

Now the darling of Canadian racing, Lexie Lou thrilled her fans a month later when she dominated the $250,000 Wonder Where Stakes. The final time of 2:00.90 over the Woodbine grass, demonstrated both her fondness for the turf, as well as further proof that she could get the classic distance.

In her first race against older mares, Lexie Lou threw in an uncharacteristically poor performance in the Grade 2 Canadian Stakes, but bounced back smartly when shipped West for the turfy Grade 3 Autumn Miss Stakes at Santa Anita on October 25. That 1 ¼-length victory, over a full field of Californian three-year-old fillies, would serve as her prep for another shot at the boys in the Hollywood Derby at Del Mar. You know what happened from there.

Whether or not you believe that California Chrome’s first race, and win, on the grass, was a tough test for the Kentucky Derby and Preakness champion, take nothing away from the very nice filly who finished second. As a matter of fact, Lexie Lou will be a deserving Canadian champion for her 2014 racing exploits, and both her, and the Hollywood Derby winner, could be in line for a Horse of the Year in their native countries.