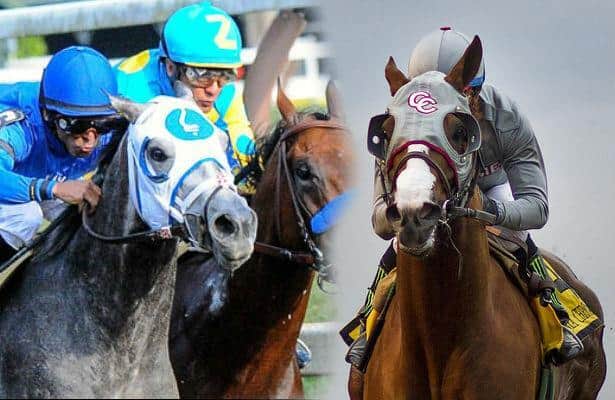 Led by the 2014 Horse of the Year, California Chrome, and last year’s Wood Memorial and Pennsylvania Derby winner, Frosted, a field of 13 probables has been announced for the March 26 Dubai World Cup. Both American stars have been in Dubai for some time, and they each look to be coming up to the race in fine fettle.

After a 9 ½ month layoff from the races following his second place finish in the World Cup last year, California Chrome has come back with two stylish wins. First in California, he scored in the Grade 2 San Pasqual Stakes. Then, after shipping to Dubai, the five-year-old chestnut dominated a handicap race while giving away gobs of weight to his competition. The Kentucky Derby and Preakness winner of 2014 looks to have returned to his best form, and looms the choice of the bettors in his second attempt at World Cup riches. His early speed should be an advantageous skill to possess on race night.

Frosted, meanwhile was the first to get a 2016 prep race in at Meydan, of all the American hopes for the world’s richest race. The son of Tapit showed his fondness for the Meydan surroundings with an emphatic score in the Al Maktoum Challenge – Round 2 on February 4, and in record time. He has since been working on Sheikh Mohammed’s private training facility, and is reported to be doing very well. The Kiaran McLaughlin trained runner lost to the champion American Pharoah four times, but as a newly turned four-year-old, he may be primed to take his turn as the most feared dirt runner on the globe.

While the top two seem like the very deserving favorites, a strong group of U.S. runners have made the trip, ready to try to walk away with the biggest purse in horse racing. Since his switch to dirt, Mshawish has won two of three, including two in a row. In fact, he comes into the World Cup off career best form, having won two straight in Florida, including the Grade 1 Donn. One of the horses he beat that day was Keen Ice, who has not hit the board in two starts so far this year, but remember, he is the only horse to have defeated American Pharoah last year, and that came at the same ten-furlong trip as the World Cup. Hoppertunity has not won a lot lately, but the classy late runner is coming off an exciting victory in the San Antonio in his most recent start for trainer, Bob Baffert.

Other familiar names to American race fans include, Mubtaahij (4th in last year’s Belmont Stakes) and Candy Boy (4th in last year’s Dubai World Cup). Others deserving respect in the big race include the 1-2 finishers in the most recent prep for the World Cup, Special Fighter and Gun Pit, who both outran Mubtaahij and Keen Ice in the Al Maktoum Challenge – Round 3.

In other World Cup evening highlights:

The $6 million Dubai Sheema Classic looks to be the second best race on the card this year. Off his powerful win on Super Saturday, the classy Postponed looms strictly the one to beat, but last year’s Secretariat winner, Highland Reel, from the barn of Aiden O’Brien, and the Japanese star, Duramente, represent serious challenges. In fact, the nine-horse field of the 12-furlong turf race is littered with international class, but make no mistake, Postponed will take some beating, as he looks to place his name at the top of the heap of the world’s best grass horses.

The Dubai Turf, likewise a $6 million race, was to be topped by the defending champ Solow, but the winner of ten straight will be forced to miss the race after “suffering a knock during a gallop”, according to trainer, Freddy Head. With the favorite on the sidelines, look for Tryster to assume the role as the one to beat. Very Special could be the main competition, but a couple of names not unfamiliar to American race fans, Euro Charline and Flamboyant, are in with a chance in the nine-furlong grass affair.

The UAE Derby, at about 9 ½ furlongs on the dirt, has attracted an interesting and eclectic group. Heading the $2 million fray will be the impressive UAE 2000 Guineas and Al Bastakiya winner, Market Rally, but the son of Unbridled’s Song should find plenty of competition from a pair of fillies. The unbeaten Polar River looks to keep her streak going against the boys, while the South African filly, Vale Dori was coming at her fast last time. Not to be forgotten is the American shipper Frank Conversation, who has won two straight stakes for trainer Doug O’Neill on the synthetic main track at Golden Gate Fields.

Other familiar names expected to be in action on the huge card at Meydan include: X Y Jet and Confrontation, who will give the U.S. a real solid chance to take home the top prize in the $2 million Dubai Golden Shaheen (6f dirt), while Marking and Cool Cowboy are two of the ones to beat in the million dollar Godolphin Mile (1-mile dirt), and last but not least, Breeders’ Cup Turf Sprint hero, Mongolian Saturday will look for another big win in the $1 million Al Quoz Sprint (5f Turf).

For a full list of all the DubaiWorld Cup probables from the Dubai Racing Club.