California Chrome Odds On in the Breeders' Cup Classic 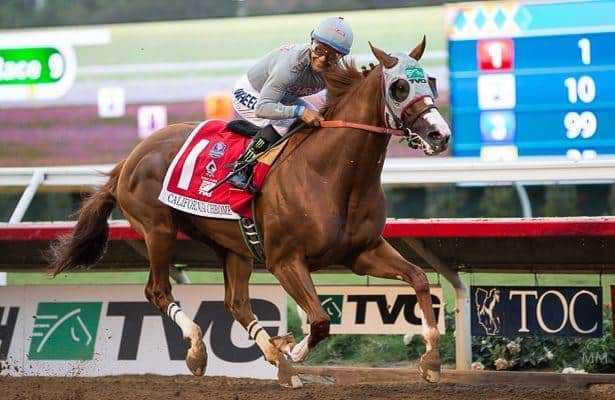 California Chrome has certainly earned the role of favorite in the 2016 Breeders’ Cup Classic. North America’s all-time richest thoroughbred has so far proven unbeatable in his five-year-old season. The 2014 Horse of the Year has won all six of his starts in impressive style. While nine others will line up against him on Saturday, there can be little doubt that California Chrome is the horse to beat.

Bet the Breeders' Cup on TVG!

Bettors are sure to make the former Kentucky Derby winner the favorite in the $6 million-dollar race. That designation has not always been a good thing in the Classic, though. Only 9-of-32 betting favorites have come through to win the big race. California Chrome will be more than the wagering favorite, though, he will be a heavy favorite.

Still, that does not mean an automatic victory in the richest race on the Breeders’ Cup menu. Since its inception back in 1984, 18 horses have been bet down below the 2-1 mark. Of them, only five have won, for a winning percentage of just under 28%. Take a look at the big names on this list below, all sent off below 2-1, who have more often than not, lost in the Breeders’ Cup Classic…

Until American Phaorah scored a popular victory in last year’s Breeders’ Cup Classic, favorites, which were bet below 2-1, had been beaten seven consecutive times. Will California Chrome be able to continue a new trend started by the Grand Slam winner in 2015?

Bettors will unquestionably be on his side. In fact, there is a good chance that he becomes only the seventh horse to be sent to post at odds lower than even money. Of course, even favorites bet that low have only won two times in the first six attempts.