By My Standards and Gabriel Saez go very well together 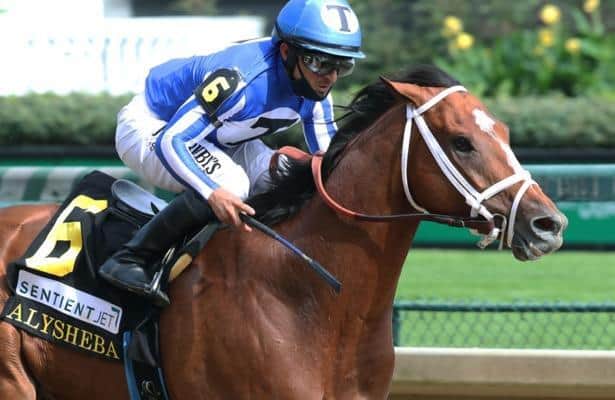 By My Standards is quietly having a very good year. Flying just below the radar, the son of Goldencents is generally overlooked when discussing America’s best horses, and that is proving to be a mistake.

The wagering public certainly has not fully embraced the 4-year-old colt trained by Bret Calhoun. He has run in seven graded stakes races the last two seasons and has never once been sent to the post as the favorite. Oblivious to who the bettors prefer, By My Standards has won four of the seven.

Reunited with regular rider Gabriel Saez for Friday’s Alysheba Stakes (G2), the second choice of the field of six found perfect stalking position behind the slow early pace of Mr. Freeze, before pouncing and proving clearly better than Owendale down the lane. It’s a running style that the horse and rider have won with before.

Purchased by J. Stevens Bloodstock, as agent for Chester Thomas' Allied Racing Stable, for $150,000 at the 2018 Ocala Breeders' Sales Spring Sale of 2-Year-Olds in Training, By My Standards has now won exactly half of his 12 lifetime starts.

The handsome bay has been even better than that this year. His Kentucky Oaks day victory was his fourth of the season (he finished second in his other two races this year), while the winner’s share of $245,520 pushed his earnings to $1.1 million this year alone.

The sharp win in the 8 1/2-furlong Alysheba was his sixth consecutive strong performance after returning to the races after a nine-month layoff. It also seemed to raise the question of whether the consistent runner would be pointed for the the $7 million Breeders' Cup Classic going 1 1/4 miles on Nov. 7 at Keeneland Race Course or the $2 million Breeders’ Cup Dirt Mile on the same card.

Calhoun quickly ended the speculation in the Churchill Downs' winner's circle, confirming that his stable star was Classic bound.

“It’s kind of weird to think the Alysheba is a prep for the Breeders’ Cup Classic, but we’re going to go with it and hope to get there in November,” said Calhoun.

Whether the Breeders’ Cup Classic is his next race or not, look for Saez to be in the saddle.

All four of his wins this year have come under the 32-year-old native Panamanian. Because of COVID-19 complications, Saez was unable to ride By My Standards in his two losses this season, when he finished second to Tom's D'Etat in the Stephen Foster (G2) and second to Improbable in the Grade 1 Whitney at Saratoga.

It should be noted that in each of those two runner-up defeats this year, By My Standards found himself a little farther off the early pace, while in each of his four wins, Saez had him close and sitting in second, right behind the early leader.

Clearly Saez, who has won six of his last seven aboard the Alysheba winner, gets along very well with this horse.

“Each time I asked him to give me that acceleration, he did,” said Saez after the impressive win on Friday. “I was really confident in him today. I was expecting him to run a huge race today, and here we are. I'm glad we got the job done. I'm looking forward to the Breeders' Cup.”

“This horse got in some interesting pace scenarios in the last two starts and today Gabe (Saez) gave him the perfect ride and sat a perfect trip the entire way around there,” added Calhoun.

As consistent as By My Standards has been, finishing in the money in 11 of his 12 lifetime starts, he has one real blemish on his resume. That of course came some 16 months ago, when he finished a disappointing 12th of 19 in the 2019 Kentucky Derby.

It’s the only time Saez and By My Standards have been beaten together since romping home in a Fair Grounds’ maiden race last February. But he was squeezed and bumped at the start over a sloppy track in last year’s Kentucky Derby. The poor beginning effectively ended his chances in the big race last year, which to date has been his only career try at 1 1/4 miles.

It looks like the winner of the Louisiana Derby, New Orleans Classic and Oaklawn Handicap, as well as Friday’s Alysheba, will get another shot at the classic distance in early November.

With horses like Maximum Security, Tiz the Law, Authentic, Tom’s d’Etat, and Improbable all pointing for the rich race at Keeneland, By My Standards likely will be well down the list among those talked about heading into the Classic.

By My Standards and Gabriel Saez once again will not be favored when they enter the starting gate on Nov. 7 for the Breeders’ Cup Classic, but clearly the pair should not be overlooked.