Bricks and Mortar, Sistercharlie take the show on the road 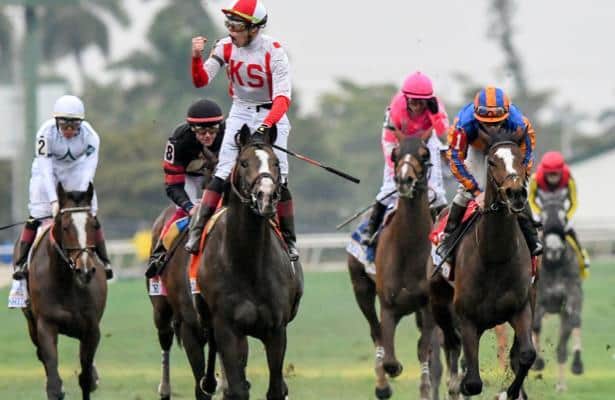 Dirt racing is king in the United States.

It's certainly not the norm when America's most outstanding runners are turf horses, but in Bricks and Mortar and Sistercharlie, that's exactly what we might be looking at in 2019.

With many of our top dirt horses beating each other, the lack of consistency has shifted the spotlight to the grass, and Saturday's big day of turf at Arlington Park, led by the Arlington Million (G1) and Beverly D. (G1) will showcase arguably the two most consistent, top-class horses in training.

Bricks and Mortar, after returning from a long layoff of better than 14 months, has been nothing short of perfect.

The run began late last year when the son of Giant's Causeway turned it on late to power to victory in an allowance race filled with stakes winners at Gulfstream Park.

That win, which came three days before Christmas, was a harbinger of things to come for the William Lawrence and Klaravich Stables-owned runner.

Patiently handled through physical issues by trainer, Chad Brown, Bricks and Mortar has proven to be a true star this year, at the age of five.

With just enough early speed to put himself in the race early on, and then an irresistible surge when the race is on the line, he has powered by his competition in four consecutive graded stakes races so far in 2019.

Three of those wins came in Grade 1 racing, and in each (Pegasus World Cup Turf; Old Forester Turf Classic; Manhattan Stakes) he got the job done on some of American racing's biggest stages.

His impressive victories on Pegasus World Cup day, Kentucky Derby day, and Belmont Stakes day leave him in excellent position to take home the Horse of the Year title at the end of the year.

Most recently, Bricks and Mortar carried the day in Belmont Park's Manhattan.

It was the type of sublime performance that we've come to expect from the winner of 9-of-11 lifetime.

Meanwhile, Sistercharlie has only run once so far this year, but the late start to the year for the Brown runner takes nothing away from the enviable streak she is on.

A winner of four straight overall, the 5-year-old daughter of Myboycharlie came back off an eight-month layoff with a massive performance in last month's Diana Stakes (G1) at Saratoga.

That sensational return to the races was her second straight win in the prestigious Diana, and Saturday, Sistercharlie will also be looking for a repeat win in the Beverly D.

Victories in the 2018 editions in the Diana and Beverly D. propelled the filly to a rousing victory in last fall's Breeders' Cup Filly & Mare Turf.

The trifecta of important Grade 1 wins to close out her 2018 campaign undoubtedly carried Sistercharlie to an Eclipse Award as Champion Female Turf Horse over Enable, who won the Breeders' Cup Turf in her only start in the United States.

Bred in Ireland, and successfully campaigned in France early in her career, Sistercharlie has been a model of consistency since importing to America for owner Peter Brant.

Like Bricks and Mortar, she will put a winning streak on the line in Suburban Chicago, and each of her four straight wins have come in Grade 1 company.

Also similar to the Arlington Million favorite, is her running style.

Sistercharlie has enough early speed to put herself in a good position in the early stages of any race, before unleashing a devastating turn of foot, that more often than not carries her to victory.

The biggest threats to end the respective winning streaks of Bricks and Mortar and Sistercharlie could well come from within their own barn.

In the Million, Robert Bruce figures to be among the most stout challengers for the favorite.

The 6-year-old Chilean-bred won this race last year for trainer, Chad Brown, and although he is winless in two starts so far this year, he looks to be rounding back into top form.

In his latest, he was a closing second to Bricks and Mortar in the Manhattan (G1), after encountering traffic in the stretch.

If Robert Bruce is able to pull off the upset over his stablemate, he would become the first ever to win back-to-back editions of the prestigious Arlington Million.

In the female counterpart to the day's headliner, Sistercharlie will be heavily favored to win her second straight, but once again, the main challenge may come from within the Brown barn.

In Competitionofideas, the Eclipse Award winning trainer has an ultra-consistent filly, who will act as Brown's second string in the Beverly D.

She won a Grade 1 race last fall in California to close out her 3-year-old season, but has yet to win in three tries this year. Having said that, she has been knocking on the door, while second each time in graded stakes on the East Coast.

The competition, which will also include European invaders in both races, will be solid, but anything other than another victory for both Bricks and Mortar and Sistercharlie on Saturday would come as a surprise.