Zipse: Breeders' Cup-bound War Like Goddess is a 12-furlong monster 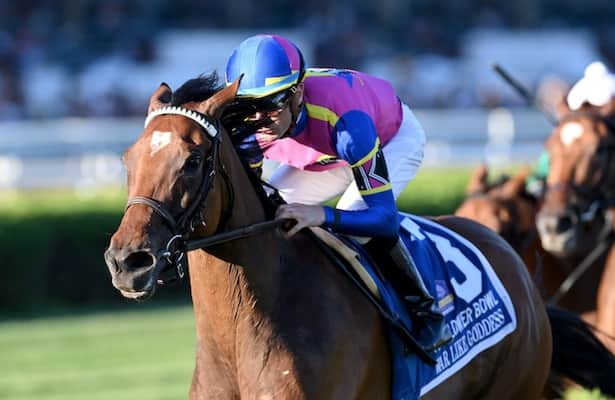 Who is America's best turf horse? We may have seen her Saturday at Saratoga. As smooth as silk and as reliable as the sun setting in the west, War Like Goddess unleashed her patented stretch run.

The occasion was the Glens Falls (G2), where the 5-year-old daughter of English Channel was handled with ultimate confidence by rider Joel Rosario, cruising home to a 1 1/4-length score on the turf at Saratoga.

It was only the second time this year that Hall of Fame trainer Bill Mott let the big mare run, and while her second consecutive win in the Grade 2, $250,000 affair in Upstate New York is nothing to sneeze at, there are bigger goals to come. And there should be, she is simply too good for this kind of competition.

Bigger goals to come like the Breeders’ Cup -- but which of the World Championship races will War Like Goddess enter?

Hosted by Keeneland this fall, the Breeders’ Cup offers two viable options for the winner of eight-of-10 lifetime. Because of the location, the $2 million Breeders' Cup Filly & Mare Turf will cut back in distance this year to 1 3/16 miles, while the $4 million Breeders' Cup Turf remains at its traditional 12-furlong distance.

War Like Goddess has never before taken on the boys, but clearly the distance of the Breeders’ Cup Turf is more to her liking. After a few months away, we were once again reminded of how good she is at 1 1/2 miles.

Despite the ridiculously slow early fractions -- six furlongs was run in 1:17.51 -- Rosario only needed to keep the heavy favorite out of trouble as the pair loped along in midpack on the outside. When the real running began, War Like Goddess needed little urging down the stretch to sprint home an easy winner in a final time of 2:29.33.

Naturally, the Breeders’ Cup has always been the 2022 goal for this outstanding turf mare. In last year’s edition, she suffered her only loss in the last seven races when she was narrowly beaten by Loves Only You and My Sister Nat in an 11-furlong edition of the Filly & Mare Turf.

She didn’t have the best of trips that afternoon in California and the Japanese mare Loves Only You was a star and at her best. Despite an impressive string of four straight stylish graded stakes wins going in, the defeat cost War Like Goddess a championship.

Given a freshening after the loss, the George Krikorian-owned mare returned in late April at Keeneland. There she won her second straight edition of the Bewitch (G3) in typical War Like Goddess fashion. It should be noted that the race is at the same track and trip as this year’s Breeders’ Cup Turf.

Mott may have tipped his hand about which Breeders’ Cup race War Like Goddess is headed when he named either the $600,000, 11-furlong Flower Bowl (a Grade 2 race she won last year), or the 12-furlong $750,000 Sword Dancer (G1) on Aug. 27 as options for her next start. Both races are at Saratoga, where she is perfect in three starts.

Strongly considering running against the boys next out in the Sword Dancer, while keeping her at the 1 ½-mile distance, demonstrates Mott’s willingness to branch out with his excellent mare. It bodes well for the connections taking a shot in the longer and richer race in three months' time at Keeneland.

As good as War Like Goddess is, she would probably have a real shot to win the 1 3/16-mile Breeders’ Cup Filly & Mare Turf, but that race often comes up quite tough with top international runners and at a distance where she is not at her very best.

I realize many do not like to run the girls against the boys, but War Like Goddess would seem to be a natural for the Breeders’ Cup Turf. We know she likes the course at Keeneland, and we absolutely know she loves the distance.

Who is the best turf horse in American racing? We’ll know more in a few months, but personally I would not pick any horse over the 12-furlong monster War Like Goddess right now.