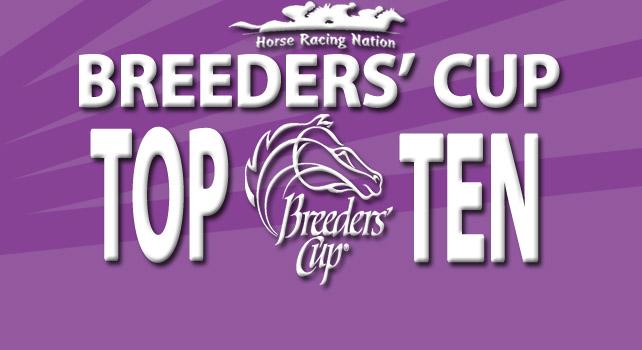 The best editions of the Breeders' Cup Turf in history? Let the countdown begin...
10) 2004 - Better Talk Now surprises – Already five-years-old, Better Talk Now began his Breeders’ Cup career in fantastic fashion. Storming to the lead spinning out of the final turn, the dark bay gelding rolled to a 27-1 shocker over America’s turf star Kitten's Joy, and European powerhouse, Powerscourt to win by 1 ¾ lengths under Ramon Dominguez. The only Breeders’ Cup ever held in Texas, would mark the first of five attempts in the Turf for the Graham Motion trainee, and his only victory.
9) 2009 - Conduit does it again - Conduit would need every ounce of his great class and affinity for firm American turf to run down speed sensation Presious Passion if he wanted to become only the second horse ever to win the race twice. Leaving the classy filly Dar Re Mi behind, the two would battle all the way to the wire. In the end it was Conduit who proved better over the ultra-game Presious Passion, winning by a determined half-length victory. Final time for the 12 furlongs was a sterling 2:23.75.
8) 1999 - Daylami is a silver streak – Jockey Frankie Dettori would go on to win this big race three more times, but it was this grey beauty who was the best of the bunch. Having to contend with the early leader and defending champion, Buck's Boy, Dettori and Daylami bided their time until the stretch run. From there the race did not take long to be decided. In a swift and decisive move, Daylami left the leader behind and sprinted home 2 ½ lengths clear of the classy Royal Anthem. The one race was impressive enough for the European to win the American Champion Turf Horse award.
7) 2007 - English Channel splashes home –Long one of the best turf horses in America, it was not until his last career race that English Channel would finally break through and won the big one. Trained by Todd Pletcher, the son of Smart Strike had finished fifth in 2005, and 3rd in 2006, but would not be denied in 2007. He relished the soft going of the water-logged Monmouth Park turf course to the tune of a seven length drubbing of his BC competition. It was the largest win margin in the history of the race and guaranteed his first Eclipse Award as our Champion Turf Horse.
6) 1988 - Great Communicator will not be denied – Great Communicator was a nice horse. He was a millionaire, and multiple graded stakes winner, but there was no way he was going to fight off the onslaught of champions bearing down him as the field came to the stretch. But as Sunshine Forever, Indian Skimmer, and Tryptych hit the lead, something strange happened, Great Communicator, under Ray Sibille, came back on the rail. Game to the wire, he outbattled Sunshine Forever and Indian Skimmer to win by half a length. At one point he had been passed by all three champions, but the five-year-old gelding would simply not be denied.

5) 1993 - Kotashaan clinches Horse of the Year – The most consistent horse in America all year long, Kotashaan had to dig down deep to defeat his excellent rival Bien Bien, and 12 others in one of the deepest fields in Breeders’ Cup Turf history. Making his patented late run, the Richard Mandella trainee swooped to join the lead early in the stretch, but Bien Bien was running the race of his life. Ridden by Kent Desormeaux, Kotashaan wore down his rival late in a thrilling battle to win his fifth grade 1 of the year, and in the process became a rare dual Turf Champion and Horse of the Year.

4) 1987 - Theatrical outduels Trempolino – Before Tiznow won it for America, there was Theatrical. The 1987 Breeders’ Cup came down to the best of America against the best of Europe, and in this one it would be the home team who came out on top.  Competing in his third Breeders' Cup Turf race, Theatrical took the lead with a half-mile to run, but was soon joined by Arc winner, Trempolino. For a bit it looked like the Euro youngster might have too much, but the veteran American had more left in the tank and was able to fight his way to a courageous half-length victory in a most memorable stretch battle.
3) 1986 - Manila beats the best – Despite the presence of turf stars like Manila, Theatrical, and Estrapade, all the talk before the race was about the European wonder horse, Dancing Brave. The champion from across the pond would not have it on this day, leaving Manila to show his mettle and turn on the afterburners late to hit the wire first by a neck over future champion, Theatrical. For the American three-year-old trained by LeRoy Jolley, it was his biggest, and probably most difficult win in a stellar career that prompted some to call him the best turf distance horse in American history.
2) 1992 - Fraise edges Sky Classic – Sky Classic was one of the best Canadian turf horses and the undisputed leader of North American turf horses of 1992, but on this day, his best would not be quite good enough. Trained by Bill Mott and ridden by Patrick Valenzuela, Fraise was always a top turf horse, but he picked the Breeders' Cup Turf to run his career best race. Given a masterful rail skimming ride by PVal, Fraise stormed from last to join the heavily favored Canadian in mid-stretch. Sky Classic had plenty more, and looked like he would be able to hold off the challenge, before Fraise found one more gear on the rail. On the wire, it was Madeleine Paulson’s Fraise by a scant nose over Sky Classic in the fastest BC Turf of the first 24 years.
1) 2003 - High Chaparral and Johar dead heat – How can I pick anything but the only dead heat in Breeders’ Cup history as the greatest ever edition of the race? An epic three horse struggle materialized in mid-stretch, as first it was Falbrav on the inside who powered by The Tin Man, with defending champion High Chaparral bearing down on him in the middle, and finishing fastest of all was Johar on the outside. As the three sprinted away from the rest of the field, it was anyone’s race, and just a matter of when the wire would arrive. In as thrilling a stretch drive ever seen in the Breeders’ Cup, High Chaparral and Johar would finish dead even, with Falbrav a heartbreaking third, and just a head behind, in an unforgettable edition of the Breeders' Cup Turf.
Conduit Fraise Daylami Theatrical Manila Johar Great Communicator Better Talk Now English Channel High Chaparral Trempolino Kotashaan Breeders' Cup Turf Breeders' Cup Turf (2011)