Breeders’ Cup Repeat not in the cards for Work All Week 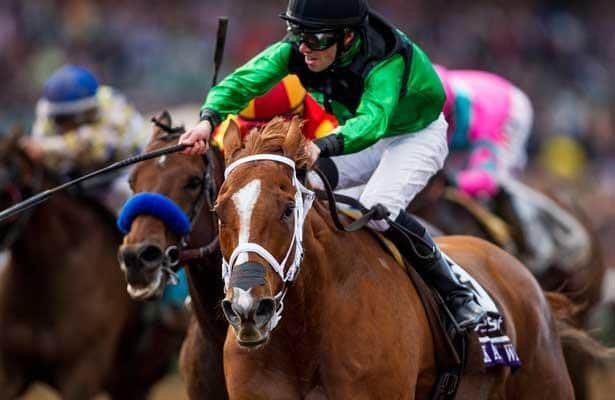 A retirement from racing well earned.

From modest beginnings, Work All Week rose up to become a champion. Yesterday, we discovered that the champion will race no more.

Before going any further extolling the fantastic career accomplishments of Work All Week, a thank you is due to Midwest Thoroughbreds, and Richard Papiese. It would have been all too easy to rehab their big money-making gelding for further seasons on the track, in hopes of future stakes wins from their Champion Sprinter. Instead, they did what was best for the horse, and immediately announced the retirement of their star six-year-old. And for that reason, I find yesterday’s announcement not to be a sad one, but rather, and ultimately, a happy ending. No serious injuries from future racing ensured, the homebred can now enjoy his next career. I say kudos to Midwest Thoroughbreds.

Before his retirement, Work All Week was as honest a thoroughbred as you will find. His career did not begin until late in his sophomore season, and the 1 1/16 mile turf race in which he debuted, proved not to be his game. When he returned to Hawthorne Park as a four-year-old, though, the impressive wins would come in bunches.

In his first full season of racing, the Roger Brueggemann-trained chestnut won seven of his eight races, with only a nose loss to the talented Sweet Luca on the Polytrack of Arlington preventing a perfect season. He won two stakes races, and his average winning margin in those seven victories was nearly five lengths. Still, the pleasure of knowing Work All Week was primarily a Chicago thing. To a national audience, the talented sprinter was largely an unknown entity. That would all change in a big way in his five-year-old season.

Starting with a nice win in a stakes quality allowance race at Oaklawn Park in January, the future champion began his steady march to an Eclipse Award. Work All Week won the Hot Spring Stakes at Oaklawn Park before a brief freshening. He returned in early summer to defeat Delaunay in the Iowa Sprint Handicap. He would suffer only his second defeat while sprinting, in the same race, and against the same horse, when Sweet Luca again got his measure in Arlington’s Addison Cammack Handicap.

Undeterred, the son of City Zip took his hard hitting and no nonsense sprint game to Keeneland for one of the key preps for the Breeders’ Cup Sprint. It resulted in a sharp win in the historic Phoenix Stakes, and the Illinois-bred’s bags were packed for a date with destiny at Santa Anita Park. Still not as well respected as he should have been at this point, Work All Week, at 19-1, and Florent Geroux found an ideal stalking position in America’s most important sprint race from his post position #13. Game and determined as always, none of the other top thirteen sprinters could get by Work All Week after he struck the lead. It was a championship moment which clinched the honor.

This season proved not to be the same fruitful year for Work All Week that 2014 was, but in no estimation could it be said that he wasn’t running well. A winner of 1-of-4. Runner-up finishes in the Aristides Stakes at Churchill Downs, and the Smile Sprint Stakes at Gulfstream Park, were not wins, but still pointed out how close last year’s champion was to the top of his division.

An eight-length tour-de-force in Mountaineer Park’s Senator Robert C. Byrd Memorial Stakes allowed Work All Week junkies one last opportunity to rejoice in victory. Little did we realize at the time that it would be his final career win. His only race since, was a solid third place finish in the Phoenix. A wide trip may have cost him a better chance, but on this day, Runhappy was just a little bit better. We now know that a rematch, and a chance to repeat in the Breeders’ Cup, is not in the cards for Work All Week.

All told, Work All Week won 13-of-19 for his connections, with four more second place finishes. He also amassed $1,511,071 in career earnings. More than that, he thrilled Illinois racing fans with his consistency, class, and speed, and along with his stablemate, The Pizza Man, went a long way to legitimizing the state of Illinois breeding.

It is a retirement from racing well earned.