BC Juvenile-bound Essential Quality has a bright future 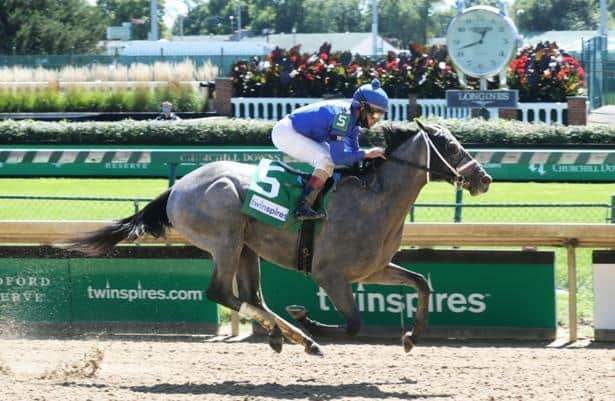 Buried deep within a Kentucky Derby Day card full of graded stakes winners was a maiden race for 2-year-olds. The winner of that card filler, a handsome gray son of Tapit, could wind up being as celebrated as any horse that ran on that afternoon of all-stars.

Essential Quality already has stamped himself as a major player on the road to the 2021 Kentucky Derby, but before he hits the Derby trail in earnest, the Brad Cox-trained colt will take his shot at an Eclipse Award in the Breeders’ Cup Juvenile.

The likely second choice for the championship-deciding race at Keeneland on Nov. 6 has only just begun a career that has all the promise of something special.

The Godolphin homebred turned heads on Sept. 5 with an outstanding debut win. Running at a distance that his trainer admits is likely far shorter for him than ideal, Essential Quality was able to find his way out of tight quarters on the way to a powerful four-length victory. Sent off as the 9-5 choice in the field of 10, he completed the 6 furlongs in a sharp 1:09.98.

The victory in the maiden sprint at Churchill Downs was all the experience he would have for the jump up to Grade 1 racing in the Breeders’ Futurity at Keeneland, this time going 1 1/16 miles.

Nonetheless, the debut performance four weeks earlier was impressive enough for him to be favored again at 9-5. Running closer to the pace than he had in his debut win, Essential Quality once again proved much the best.

Now he has a race around two turns under his belt — and at the very track that will host the Breeders’ Cup. Of course, there will be new challenges when he enters the starting gate for the third time in the first two months of his burgeoning career — namely Jackie’s Warrior.

That one storms into the Breeders’ Cup off of four consecutive impressive victories, the last three of which come against graded stakes competition. The speedy son of Maclean’s Music undoubtedly will be the BC Juvenile favorite, as he has run all of his rivals into submission with an imposing high cruising speed.

Still, the question remains whether Jackie’s Warrior will be the same dominating presence when he stretches out around two turns for the first time. He also will have a new foe to deal with in Essential Quality.

It is somewhat ironic that Essential Quality will give Godolphin a big shot in the Breeders’ Cup Juvenile, given what happened last year. Another homebred of theirs, Maxfield, was in an almost identical position last fall, having parlayed a debut win at Churchill Downs into a stylish victory in the Breeders’ Futurity a few weeks later.

Maxfield was destined to be the second choice in the Breeders’ Cup Juvenile, but as we all know, he was sidelined by injury. Another physical problem kept him out of this year’s Kentucky Derby. Still unbeaten, that talented Godolphin homebred is gearing up for a 4-year-old campaign.

Can Essential Quality succeed where Maxfield never had the chance?

There is a lot to like about Godolphin’s charge this year. The race over the track should not be easily discounted. Having already won around two turns and at the same distance as the Breeders’ Cup Juvenile at Keeneland is a decided advantage for Essential Quality.

More than that, though, he is a colt with seemingly limitless upside.

“We’ve had some very nice 2-year-old fillies, but this is probably the best (2-year-old colt) I’ve had as far as talent goes," said trainer Cox. “He showed us from Day 1 that he’s special, very talented. He’s got some learning to do. If he can figure it out, he’s a serious animal.”

In his debut performance at Churchill Downs, Essential Quality came from well off the pace, overcame traffic and won going away. Stretched out against better competition, he was a little eager early but settled down and passed his next test with flying colors. It was an improvement from his first race, exactly what you want to see, but there is still plenty of room for improvement.

Jackie’s Warrior has been super so far in his career, but Essential Quality is a colt that I am even more excited about moving forward. Not only could he beat the favorite next week in the Breeders’ Cup, but he also could develop into something special next spring.

Can Ginobili bring his 'A' game to the Big A for Cigar Mile?
Among America’s most notable tracks, there are few...
x close