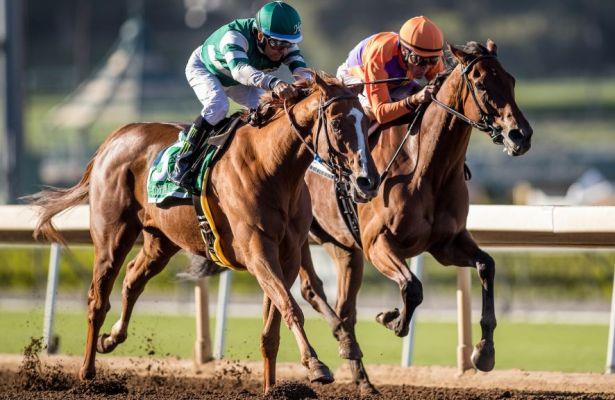 The first sweep of the Triple Crown in 37 years, followed by an unprecedented addition of a Breeders’ Cup Classic victory by American Pharoah, made 2015 a tough act to follow. How could the 2016 racing season possibly live up to our first Grand Slam? Actually, this year’s racing has done a very nice job in helping us to move on after the retirement of the Pharoah. Highlighted by the exploits of California Chrome, with plenty of supporting highlights supplied by the likes of Songbird, Tepin, Frosted, Flintshire, Stellar Wind, Nyquist, Arrogate, Lady Eli, and more, this racing season has stood tall in its own right. Better yet, every horse I just mentioned is Santa Anita bound. With another outstanding edition of the Breeders’ Cup almost upon us, I thought it would be interesting to see which championships will likely be decided in just over two weeks in Southern California.

Horse of the Year - Forget about it, no matter what happens on November 4 and 5, the seasonal accomplishments of California Chrome are enough to start etching his name in the hardware.

Three-Year-Old Male – One way or another, the Breeders’ Cup Classic should decide things. Either Arrogate or Nyquist would clinch the trophy with a victory in the Breeders’ Cup Classic. With the likes of California Chrome in the race, that is much easier said than done, though. Even a strong runner-up performance by Arrogate in the Classic, might not be enough for him, though, with only one stakes victory. Unless he can add another strong win after the Breeders’ Cup, I think only a win in the Classic would be enough for him to win a championship. Nyquist, on the other hand, might need only a respectable showing and an Arrogate loss on November 5 to wrap things up. Although winless since May, his trio of graded stakes wins, highlighted by the Kentucky Derby looks comparatively strong in this division. Exaggerator is hoping for an Arrogate loss, and a Nyquist flop, to be in the discussion, while not even a BC Dirt Mile score by Gun Runner would be quite enough for him.

Three-Year-old Filly – The Breeders’ Cup will have no bearing on this award … Win, lose, or draw, Songbird will be a deserving unanimous selection as champion.

Older Female – Stellar Wind holds the advantage, but what happens in the Breeders’ Cup will be the decider. If she wins the Distaff, the race is over. If Songbird wins the Distaff, Stellar Wind could still win the award depending on what kind of race she runs. A poor performance could open the door for the retired Cavorting. Meanwhile, Beholder, Forever Unbridled, and I’m A Chatterbox are all still in the running, and perhaps even Curalina. A Distaff win by any of them would likely also warrant an Eclipse Award.

Turf Male – Flintshire is way ahead, and even a loss in the Breeders’ Cup Turf would likely not shut him out at the Eclipse Awards. The only question could come if Ectot backs up his Joe Hirsch Turf Classic victory, with another win over Flintshire. If that happens, the vote could very well swing towards Ectot, on the strength of his two wins over Flintshire.

Turf Female – Like Flintshire, and even more so, Tepin has a big lead in this division. Could a big win by either Lady Eli in the Filly & Mare Turf, or Miss Temple City in the Mile, threaten that lead? My belief is no.

Two-Year-Old Male – Gormley, Practical Joke, Three Rules, Syndergaard, Klimt, Theory, Not This Time, and Classic Empire. All of them are in the running for the lead of the division among the Kentucky Derby 2017 contenders, and most, if not all should be in this year’s Breeders’ Cup Juvenile. I like the last two listed the best, but any of the bunch can likely call themself a champion with a victory in the Cup.

Two-Year-old Filly – Perhaps even more unsettled than their male counterparts, a win in the BC Juvenile Fillies would go a long way towards an Eclipse Award in January.

Sprint Male – The Breeders’ Cup Sprint should decide a very interesting division. It would be a clean decision if either Lord Nelson or A.P. Indian won the race, but even a win by another, such as Drefong, Masochistic, Joking, or Delta Bluesman, would probably carry enough influence to win a championship.

Sprint Female – In an extremely wide-open division, chances are very good that the winner of the Breeders’ Cup Filly & Mare Sprint will also take home the Eclipse Award.