Big statements were made on Belmont Stakes day 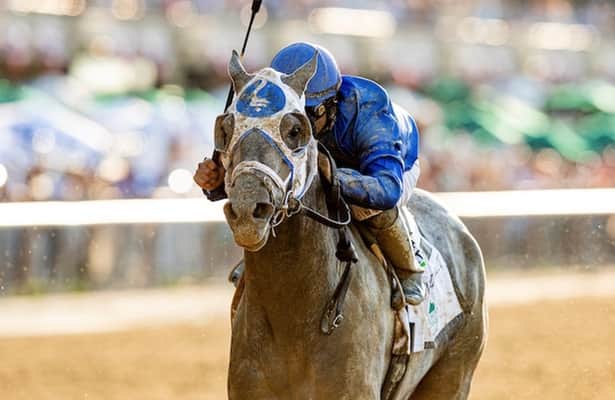 Belmont Stakes day has become one of the best race cards of the year, and this season it showcased several of America’s finest horses. Big statement performances were turned in up and down the card, and I believe these victories will go a long way in deciding our end-of-year championships.

Essential Quality is the nation’s best 3-year-old. It might have been in doubt heading into the final leg of the Triple Crown, but there should be far less question now.

Much has been made about the perfect trips he has enjoyed in all races other than the Kentucky Derby. On Saturday, he athletically worked his way off the rail heading into the first turn and was a little farther off the early pace than was projected. It was a good place to be, considering the swift early fractions.

[RELATED – Belmont weekend runners: Here's where 11 are headed next]

When the pace up front slowed just a little, he gained swiftly down the backstretch to, once again, be in position to pounce on the turn. The fact that he puts himself in wonderful position at the head of the stretch in every race should be to his credit, rather than a detraction.

In the Belmont, he made the most of his opportunity. Doggedly running down a stubborn opponent, he was able to prove best over his good rival Hot Rod Charlie in the final quarter-mile.

As the two left several nice horses far behind, I could not help but think that this had the look of the defining race of the division. Hot Rod Charlie ran great, but much like last year’s Breeders’ Cup Juvenile, Essential Quality was just a little better.

Like numerous champions of the past, he failed in his attempt in America’s most prestigious race. He might not have won the Kentucky Derby, but he has won everything else. Now 6-of-7 lifetime, he fires every time, and he does it against all comers.

Essential Quality was the best 2-year-old, and after the Belmont, I feel very comfortable in saying he is still the best halfway through his sophomore season.

Domestic Spending is the nation’s best grass horse. Of this, I struggle to find any argument. Making his first start of the season on Kentucky Derby day, the Chad Brown-trained runner closed in scintillating fashion to get up for the victory – well, a tie for the win – in the Turf Classic (G1) at Churchill Downs.

The dead heat with Colonel Liam left some question as to who is the best horse on the turf. In retrospect, the Churchill Downs result now looks more like a changing of the guard. Desperate to hold him off last time, there was no stopping Domestic Spending on Saturday.

The son of Kingman was absolutely brilliant in dominantly dispatching arguably the deepest turf field of the year so far in Saturday’s Manhattan (G1). Decisive and thorough, it was the most impressive performance of the weekend.

Like Essential Quality, he is 6-of-7 lifetime, but unlike the leader of the 3-year-old male division, I don’t see anyone currently out there that can give this gelding a legitimate test. That is how good he has looked in the first two starts of his second season.

An excellent 3-year-old, Domestic Spending looks that much better at 4. Perhaps we will have to wait until top Europeans come for the Breeders’ Cup, but for now, I believe he can rule over this division with an iron fist.

Monomoy Girl and Swiss Skydiver might have more recognizable names, but Letruska has clearly surged to the lead in the older female dirt division.

It’s a remarkable story. Running her first half-dozen races in Mexico City, of all places, the 5-year-old daughter of Super Saver has improved in America to the point of being within shouting distance of a championship. Now 14-of-18 on dirt, her performance in winning the Ogden Phipps (G1) was her best yet.

In April’s Apple Blossom (G1), she announced herself as an Eclipse Award player. In the Phipps, she took her place atop the division. I believe there will be big challenges ahead, but for now, she is deserving at the top.

Silver State finally might get the respect he deserves. An impressive winning streak of five races, including the million-dollar Oaklawn Handicap (G2), went largely unnoticed because those wins did not take place in New York or California. It’s clear now that this son of Hard Spun is a serious racehorse.

Currently riding a six-race winning streak, it’s hard to ignore Silver State any longer. His win on Saturday in the Met Mile (G1) was unspectacular, but it was decisive and came over a strong field. He clearly knows how to win and now is proven against top horses.

Perhaps even more so than Letruska, he has much work to do to secure a championship, but as of now, no horse is more deserving as the division leader of the older dirt males.

Search Results cannot claim the title of division leader with the unbeaten Malathaat around, but the daughter of Flatter validated a narrow loss to that one in the Kentucky Oaks with her victory Saturday in the Acorn Stakes (G1). With only one career loss, she clearly deserves another shot at the division leader.

It wasn’t easy for Mean Mary in Friday’s New York Stakes (G2), but I think that’s just fine with the 5-year-old daughter of Scat Daddy. The Graham Motion-trained mare is a feisty competitor who seems to hate to give up the lead. She announced herself as a serious grass horse in 2020, and she might have an even bigger year in store in 2021. As of today, she leads the female turf division.

And finally, in a wide-open male sprint division, both Firenze Fire and Drain the Clock threw their hats into the ring as potential Eclipse Award winners with respective impressive wins on Friday and Saturday.

That’s nothing new for Firenze Fire, who won his 13th career stakes race in the True North (G2), but for the Drain the Clock, his determined win over Jackie’s Warrior in the Woody Stephens (G1) was a big show of class. Both talented sprinters look to have plenty of say in the division over the coming months.