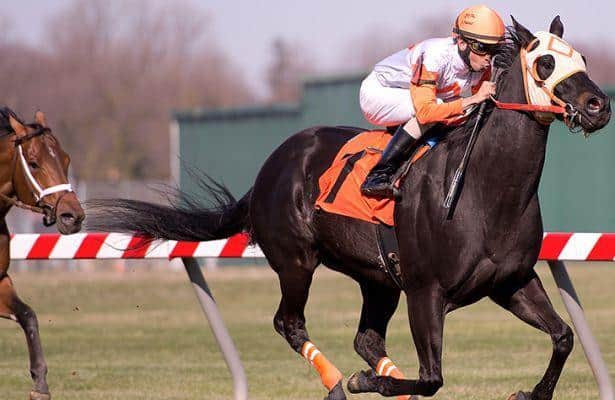 The announced retirement of Ben's Cat earlier this week closes the book on one of the more remarkable racing careers in recent years. His career stats are impressive enough, but they tell only part of the story of the King Leatherbury gelding. All told, the homebred son of Parker’s Storm Cat earned $2,643,782, while winning 32 times in his 63-race career. He also reported home to the winner's circle in at least one stakes race an amazing seven consecutive years.

For fans of Maryland racing, the Preakness may be the big race, but for the better part of a decade, Ben's Cat was the big horse. Crab cakes and Ben's Cat were the two things you could count on in the state of Maryland.

Now was time for the old war horse to finally pack up his tack. At eleven-years-old, he had finally lost a step. In three starts this year, including a pair of stakes races which he owned over the years, the Maryland-bred had finished off the board. It was truly uncharted territory for a horse who fired every time.

For the previous seven racing seasons, Ben's Cat was one of the finest turf sprinters in the nation. Although he never ventured to the Breeders' Cup, his class and consistency spoke for themselves. No turf sprinter, no matter how fast, was safe from the inexorable closing kick of the King's horse.

He'll be remembered for his prowess on the grass, but he proved to be more than that. Those three wins in the Fabulous Strike all came on the dirt. Ben's Cat just knew how to win, and he liked to win. That's why it is so fitting that he is a King Leatherbury horse.

His owner, breeder, and trainer is also a Maryland legend. The 84-year-old conditioner credits Ben's Cat as a big reason why he entered racing's Hall of Fame in 2015. Like the Cat, the King never won America's biggest races, in America's biggest places, but all he did was win -- 6,485 races and counting. Consistent and with class, it seems that horse and trainer were meant for each other.

Ben's Cat was a winner from the first time he took to the track. In fact, he won his first eight races. Tipping his versatility, he was finally beaten in his ninth career start when he finished second in a stakes races over the inner (dirt) track at Aqueduct, while going a mile.

It's not easy to identify one single season, as he had so many good ones, but perhaps his best racing season came way back in 2011. Ben’s Cat won six stakes races that year, and certainly looked the part as possibly the best turf sprinter in the nation. His win in the $350,000 Turf Monster at Parx Racing explains everything you need to know about him as a runner.

That near impossible wide rally for the win was a “Win & You’re In” race for the Breeders’ Cup Turf Sprint, a race that Ben’s Cat surely would have been one of the ones to beat. Not nominated to the World Championships, his veteran trainer decided not to pay the steep supplemental fee, and kept his star at home, where he won a pair of stakes races at Laurel the following month.

The beat went on for the King and his Cat -- and it went on. Year after year, Ben's Cat was the horse to fear in all the turf sprints held in the Mid-Atlantic region. He never slowed down, and he never lost his desire to win.

All good things must eventually come to an end, and so it is for the racing career of Ben's Cat. Personally, I felt a few mixed emotions upon hearing of his retirement, but I knew it was time. He had done so much more than could have been hoped when he first stepped into the starting gate on May 8, 2010.

I will miss seeing him race, but the memories will never leave. Happy retirement, Ben's Cat. If ever a racehorse earned his retirement, it was you.