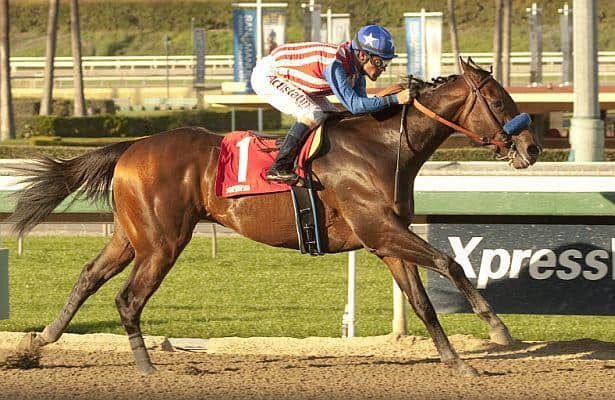 In a supposed showdown between two promising sophomore colts from the barn of Bob Baffert, only one looks ready to join the 2014 Kentucky Derby trail. While Tap It Rich came to a gunfight armed only with a butter knife, by once again flaunting more of his hard to handle ways than his talent, a bright new star may have been born in Kaleem Shah's Bayern. Now perfect in two starts, the son of Offlee Wild forced his name into the hat of California’s top three-year-olds, along with Candy Boy, Shared Belief, and California Chrome, by treating his stablemate and three others with utter disdain.

Away smartly from the one-hole, Bayern went right to the lead with little urging from his Hall of Fame rider Gary Stevens. He felt a little pressure briefly from Brother Soldier on the backstretch, but it was just a matter of time before Bayern kicked clear again, and entered the turn with a rapidly growing advantage. From there, only the final margin was in doubt, as Bayern cruised through six in 1:11.77, and to a final time of 1:35.77 for the flat mile. The erratic and headstrong Tap It Rich was held together well by Mike Smith to finish second, but second by a whopping 15 behind the winner.

From the unraced Thunder Gulch mare, Alittlebitearly, Bayern was a $320,000 two-year-old purchase last May at Fasig-Tipton Midlantic in Timonium. He was pegged as the 3-5 choice today over the 13-10 Tap It Rich on the strength of a sharp Maiden Special Weight score at Santa Anita on January 4. The 3 ¼ length victory, going seven furlongs, earned a solid Beyer figure of 92. That number is sure to be eclipsed by today’s impressive performance.

Objectively, everything went as well as could have been dreamed of for Bayern and his supporters. Not only did the main challenger take himself out of serious contention with his antics, but Brother Soldier became much less of an early pace bother, by breaking poorly. Having said that, Bayern certainly looked good opening up his advantage with every stride down the Santa Anita lane. No doubt stakes racing and better competition are in his immediate future.

Analysis: Use these 3 runners in the Cigar Mile
After taking more time to handicap the Grade 1, $7...
x close