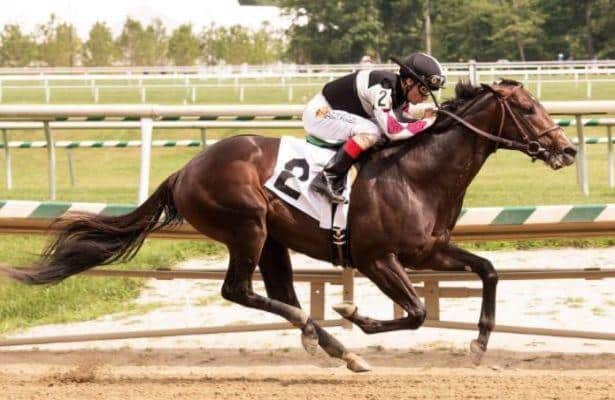 In the first two legs of this year's Triple Crown, first-crop sires were all the rage. Always Dreaming, sired by Bodemeister, and Cloud Computing, sired by Maclean's Music, raced their sires to instant success and respectability. Will there be similar successes for those sires breaking out their first crop of juveniles in 2017?

One sire who has come out running is the new Hill 'n Dale stallion, Violence. The lightly raced, Grade 1 winning son of Medaglia d'Oro already has three winners, and in today's maiden winner at Laurel Park, it looks like he has a good one.

Barry Lee is the name, and running fast appears to be his game.  Most recently purchased by Sagamore Farm as a $380,000 two-year-old in training at Ocala in March, the dark bay colt was bet down to heavy favoritism for his career debut. A series of strong workouts for the Horacio DePaz-trained colt pointed him out as one to watch, and he only exceeded expectations with a wow type of performance.

Breaking well, under Fergal Lynch, Barry Lee (Violence--Light of a Star, by Muqtarib) went right to the front and led the way down the Laurel backstretch through an opening quarter in :22.93. Early competition was deep in the field of ten, as several other juveniles moved in on the turn to press the 11-10 favorite.

Unfazed by the pressure, the Sagamore runner found another gear spinning out of the turn. Barry Lee hit the stretch in front, and quickly put away his maiden foes. Drawing clear down the lane, he won for fun, hitting the wire an easy 6 1/2-lengths in front. Final time for the five furlongs was a strong :57.96.

Look for the impressive son of Violence to test stakes waters in his next start. The Grade 2 Saratoga Special on August 13 could be next, according to his trainer.

“We’ve had high expectations for him. He’s a very athletic horse,” explained DePaz. “They got a good horse at the sale. I was concerned because the inside is not the ideal spot for a first-time starter but he’s really classy. He’s got a real good mind on him and, tactically, you can make him go and he comes back to you. You can rate him pretty easily.”