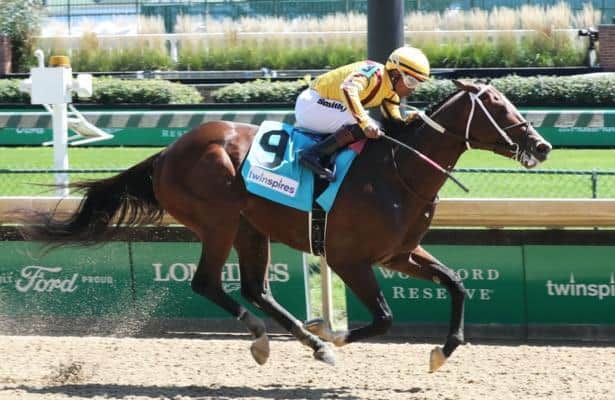 If you’ve been waiting for big things from Aurelius Maximus ever since a romping win at Belmont Park in his second career start, it’s been a long wait.

The grand-looking son of Pioneerof the Nile, out of a graded stakes winning A.P. Indy mare named La Reina, won that maiden race two years and two months ago and has yet to become a stakes winner. But that could change on Friday, when the Steve Asmussen-trained runner tries his luck against a deep and accomplished field in the Grade 1 Clark Handicap at Churchill Downs.

In his second start after a second sizable layoff, Aurelius Maximus came very close to an initial stakes victory when he just missed against a game Mr Freeze in the Oct. 10 Fayette (G2) at Keeneland. The second choice that day — in a field that included five horses entered in the Clark — the bay horse demonstrated he belonged with graded stakes competition.

Having shied away from tight quarters heading into the turn, he came back nicely on the outside and turned in a strong performance in his third start of 2020 and his third start for Asmussen.

Owned by Stonestreet Stables, George Bolton and Peter Leidel, the 4-year-old colt had been transferred from trainer Chad Brown to Steve Asmussen at the end of 2019 and quickly found success for his new barn.

In his second start back off his first lengthy layoff, the well-bred horse started his 4-year-old season in style, scoring an impressive 2 3/4-length victory in a Jan. 4 allowance race at Fair Grounds. Unfortunately, that would be the last we would see of Aurelius Maximus for another eight months.

Despite the second time away from the races, he would put together his first winning streak with a decisive allowance win over another Clark entrant, Bodexpress, on Kentucky Derby day at Churchill Downs.

Off the two allowance wins, spread eight months apart, Aurelius Maximus would return to stakes racing for the first time since his third lifetime start, when he finished fourth behind Complexity and Code of Honor more than two years earlier in the Champagne (G1). While the Fayette result was good, he will need to be even better on Friday.

From a handicapping standpoint, the odds will be right on Aurelius Maximus in the Clark. There are too many accomplished horses in the field for him to go off at anything less than attractive odds.

He also has tactical speed, which should come in handy in a 14-horse field that does not appear to have an abundance of early speed. While some will have to fight their way through traffic, he should be able to work out a good stalking trip behind the most likely pacesetter, Bodexpress.

Unlike many in the field, Aurelius Maximus also is relatively fresh. While many have had tough campaigns this year, including a run in the Breeders’ Cup only three weeks ago, he comes into the Clark six weeks removed from his runner-up in the Fayette. Friday will be his third race off the layoff and only the eighth race of his career. There is good reason to believe he can take another step forward.

Already proven over the track, having won that allowance two starts back, this regally bred son of Pioneerof the Nile looks like a great wagering alternative to big names such as Code of Honor and By My Standards in Friday’s Clark Handicap.