Arts and Letters owned the Summer of '69 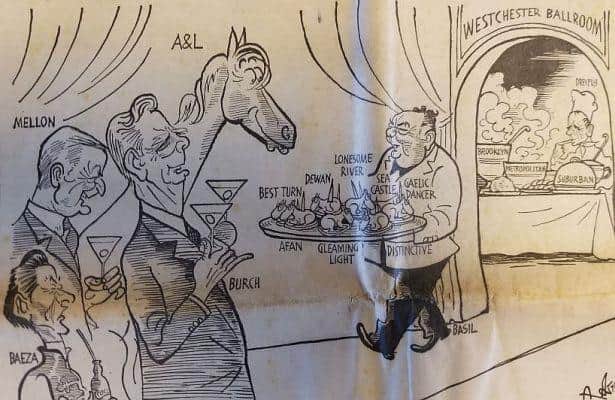 It was the summer of '69. Who would have thought, just a few months earlier when Majestic Prince maintained his perfect record with back-to-back, hard-fought victories over Arts and Letters in the Kentucky Derby and Preakness, that it would be the latter poised to make a run at Horse of the Year honors? But that's exactly what happened as springtime gave way into the dog days of summer, before a racing nation turned its eyes to autumn in New York. Make no mistake, Majestic Prince did not lose this championship; Arts and Letters snatched it away from him with great vengeance.

Paul Mellon's homebred son of Ribot had arrived to Louisville as a work still in progress. A winner of only four of his first twelve races, Arts and Letters was still learning how to put it all together for trainer Elliot Burch. After just a maiden and an allowance win in six starts at two, the Rokeby Stable runner futilely chased another future Horse of the Year, Ack Ack in his sophomore debut at Hialeah. The chestnut colt quickly rebounded with a three-length tally in the nine-furlong Everglades Stakes for his first stakes victory.

That initial stakes victory was not quite a light bulb moment for Arts and Letters, though, as second place finishes in the Flamingo, Fountain of Youth, and Florida Derby ensued. Perhaps it was the springtime air, or the Kentucky bluegrass, but he would turn the corner in his next start. Start #12 for Arts and Letter came at Keeneland. Ridden by Bill Shoemaker, Arts and Letters dominated the Kentucky Derby prep from the beginning, winning off by 15-lengths in a sparkling time of 1:47 4/5.

Now headed to the first Saturday in May as one of the favorites, Arts and Letters would not be the favorite. That honor fell upon Majestic Prince who had won each of his first six starts in California impressively, before a blistering win over the Churchill Downs strip in the seven-furlong Stepping Stone.

Arts and Letters ran a big race in the Kentucky Derby, as did the late-running Gotham and Wood Memorial winner, Dike, but in the end it was the 'Red Prince of the West' who came out on top in a fantastic stretch battle.

While Dike rested for the Belmont, Arts and Letters was back for another shot, this time in Baltimore. Brushed at the start, he came running on the turn, but could simply could not get by his talented and determined rival. A neck margin in the Kentucky Derby had been shortened to a head. Majestic Prince was now undefeated in nine starts, while Arts and Letters had come tantalizingly close in the first two legs.

He followed up those tight losses to the Californian favorite with a brilliant victory in the Met Mile. That victory, his first since the Blue Grass, came just 13 days after Pimlico, and just eight days before the final leg of the Triple Crown. It was in that edition of the Met, where Arts and Letters would have his first start against older horses, and in particular, the top older male in the nation, Nodouble. In the one-mile Metropolitan, the older winner of five major races in 1969 would have no answers for his younger foe. It was a trend that would continue in the fall.

Races against the older Nodouble would have to wait, though. First he would need to gain a measure of revenge on his rival, and end the bid of Majestic Prince becoming the first horse in history to win the Triple Crown while still undefeated. Sadly, the Derby and Preakness winner was not at his best physically for the Belmont, and though game, he could not handle Arts and Letters at twelve furlongs. After narrow defeats in the first two legs of the Triple Crown, Arts and Letters won the Belmont Stakes by 5 1/2-lengths. Majestic Prince was second, but would never race again.

Getting back to the summer of 1969, Arts and Letters dominated the big races for three-year-olds at the Spa like few before, or since. With Braulio Baeza in the saddle, as he had been for each leg of the Triple Crown, replacing an injured Shoemaker, he won the Jim Dandy by ten-lengths. The son of Ribot then came back eight days later to equal the track record at Saratoga of 2:01 3/5 for the ten furlongs of the Travers. In that one, he powered away from the classy Dike by 6 1/2-lengths.

With four big wins on the trot, Arts and Letters would not let up in the fall. Once again meeting Nodouble, he won the ten-furlong Woodward Stakes by two lengths at Belmont, before turning in a tour-de-force in the two-mile Jockey Club Gold Cup. This one was at Aqueduct, and for the third straight time in their meetings, Nodouble was second best, but this time there was 14-lengths between Arts and Letters and his nearest competition.

When the 1969 season was said and done, Arts and Letters had his final revenge on his great rival from the West Coast. The Virginia-bred star was named Horse of the Year, Three-year-old Champion, and Handicap Champion, after dominating his final six starts of the year. Two at Aqueduct, two at Belmont, and two at Saratoga, from distances of one-mile to two-miles, Arts and Letters proved untouchable in all of these important races; the Met Mile, Belmont Stakes, Jim Dandy, Travers, Woodward, and the Jockey Club Gold Cup.

His connections were planning on shipping him to Europe to run in some of the biggest races overseas, but unfortunately, we never really got to see what an older Arts and Letters could do. He raced only three times, winning the Grey Lag Handicap in his second start of the year, before suffering an injury in the Californian Stakes, which ended his racing career.

While the careers of Majestic Prince and Arts and Letters were ultimately cut short by injury, 1969 was a racing season that should never be forgotten. The California runner was the best for the first five months, but after that, the East Coast took star over, and did so with ridiculous ease.