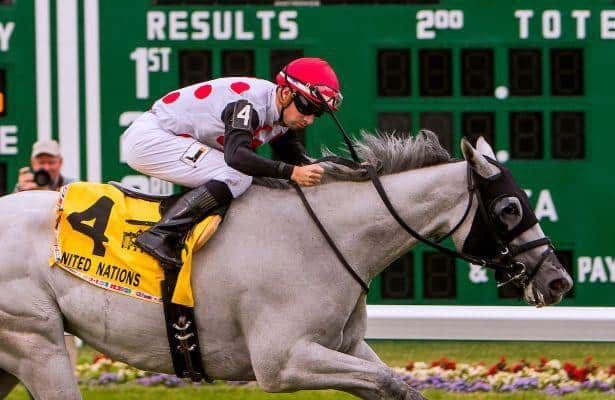 Grass racing enthusiasts rejoice! It is once again time for the 2016 Arlington Million. Supported in the card by several strong turf stakes like the Beverly D., Secretariat, and American St. Leger, there is no finer day of grass racing in the United States than what is in store for us Saturday at Arlington Park. Going back to the magical days of John Henry, the Arlington Million has always been a gold standard in American turf, and as usual, it is not just about the home team. Year in, year out, the Million Day card attracts a strong bunch of international players, and this year will be no exception. Without further ado, let’s take an early look at the field, with my projected odds and analysis …

11) World Approval (9-2) – This year’s Million is definitely a wide open affair, but if there is one horse with nary a negative, it has to be this son of Northern Afleet. Consistent as they come, the Mark Casse trained gray has run nothing but good races since switching to the turf early in his career. He has excellent tactical speed to find good position in any type of race, and he comes to Chicago in career best form off a sharp score in the Grade 1 United Nations. You’ll notice that in his only previous race at Arlington, he was a game winner of the American Derby over this course last year. I’m not sure he wins this, but I do think he is the most likely winner. Tepid Top Pick

8) Decorated Knight (10-1) – I love this one’s consistency. He seems to fire every time for trainer Roger Charlton, and although he has not been facing the very best in Europe, his recent form at good racetracks is too good to ignore. I also like the fact that most of his races are just a little bit shorter than this, yet he has proven himself at ten furlongs. This tells me that he should be sharp enough to handle American style racing, but when push comes to shove, ten furlongs should not be a problem. He also has tactical speed, and appears to be in career best form. Very Interesting Invader

1) Danish Dynaformer (15-1) –I’ve been thinking that this four-year-old son of Dynaformer has the talent to win something big on the grass for some time now. Coming in off a Grade 3 win at Woodbine for master trainer, Roger Attfield, I think Saturday may be the day. He’ll just need a little pace to run at, but if he gets it, I suspect the ten-furlong trip of the Million will be perfect for his skill set. Anything other than double digits on the tote board would be a disappointment, as would anything other than a strong performance for the talented colt coming into his own. Talent to Upset

12) Tryster (7-2) – Looks like the Godolphin owned globetrotter will go favored at Arlington, and I can see why. After putting together a nice win streak on synthetics in England last year, he has proven to belong with top class horses on the grass in 2016. He paired impressive stakes win earlier this year in Dubai, including one at ten furlongs, before running a solid third in the $6 million Dubai Turf for trainer Charley Appleby. Since then he has only one start, running fifth against a strong cast in the Group 1 Prince of Wales’s at Royal Ascot. On his best, he certainly fits with this group. Dangerous Shipper

5) The Pizza Man (10-1) – Don’t give up on last year’s champ just yet. Yes, I know he is seven-years-old, and that he has lost five of his last six races, including all three this year, but the defending champion may just be rounding back into form. Beaten a trio of noses in his last, it was against cheaper, but it also featured a fast final quarter mile. That effort should have him primed for his best when it counts the most. A 10-of-14 record at Arlington is proof of his fondness for the surroundings. Respect the Defender

9) Mondialiste (5-1) – This veteran son of the great Galileo represents one of the trickier predictions of the race. On his best, he has the class to win this. In fact, he proved himself to North American race fans with two big efforts last year winning the Woodbine Mile, before finishing second in the Breeders’ Cup Mile. This will be two furlongs further than those, so I question whether this is his best distance. Having said that, after three straight dull performances, his last, when second in the Group 2 York Stakes at just over ten furlongs, makes him a major player in this. Classy Competitor

13) Deauville (6-1) – The only three-year-old in the field, this Aidan O’Brien trainee made a very favorable impression in his U.S. debut, winning the Grade 1 Belmont Derby in game fashion. It’s always interesting to see a young horse step up against older for the first time, and usually they have good reason to make the attempt. This colt does belong, but on the other hand, there is a reason he was beaten in four consecutive stakes races in Europe, before coming over. I respect his class, but he will need to beat me against this bunch. Trying the Big Boys

10) Wake Forest (6-1) – Since arriving in America for last year’s Million, Wake Forest has proven to be a consistent performer against our top level turf horses. He is also the only entrant for the nation’s top turf trainer, Chad Brown. I thought he was a live longshot last year, but his rally never really got going. He’s been better this year on the East Coast, but still I wonder if he might once again have trouble mowing them all down at ten furlongs. A player, for sure, but I will try to beat him. The Brown Factor

6) Kasaqui (20-1) –It’s tough to put this Argentine import so low down the list considering how good his recent form has been, but I have to be honest with his chances, or lack of chances, in here. The jump up in class is just a little too much for me to get behind. Nice Horse, but Not This Nice

3) Greengrassofyoming (30-1) – Another coming in off an Arlington stakes win, having scored in a four-horse photo in the Stars and Stripes. He has never been better for trainer Mike Maker, but now he steps up to the big leagues. I was surprised he won last time, but I would be far more surprised if he won this one. Question of Class

7) Take the Stand (20-1) – The good news is that he wired a Grade 2 stakes in his last start, and actually defeated the top pick. The bad news is that he has not run since that March win in New Orleans, and World Approval has gone on to bigger and better things since. He very well could be the pace setter, before folding up his tent. Early Speed

2) Dubai Sky (30-1) – An interesting horse in that he won the Spiral Stakes two starts back. The problem with that is it came back in 2015. His return race for trainer Bill Mott last month was solid, but still, this is the Million. He should add to a reasonable pace. Too Much Too Soon

4) Pumpkin Rumble (30-1) – The son of English Channel has run a bunch of nice turf races of late, including a narrow loss in the local Stars and Stripes, but now he steps up in class to a level that I suspect will be just a little too much for him to handle successfully. You’re Out of your Element, Pumpkin