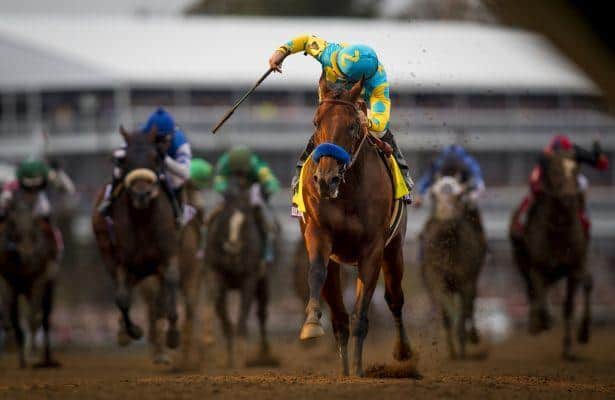 2015 was a year of historic achievements for American Pharaoh. He was the first horse to win the Triple Crown in 37 years, the first Crown winner ever to go on and win the Breeders’ Cup Classic, and today in London, he became the first American runner to be celebrated as the Longines World’s Best Racehorse.

Demonstrating that the great son of Pioneerof the Nile has a huge fan base not only in America, but outside of the borders of the United States, as well, the ceremony in announcement that American Pharoah was the best of the best worldwide was received with great joy and emotion from an international audience of racing fans.

I was honored to be invited to attend the fantastic event put on by Longines and the International Federation of Horseracing Authorities (IFHA), which also included the first ever announcement of the Longines World’s Best Horse Race. That honor was bestowed on France’s Qatar Prix de l’Arc de Triomphe, but more on that later. First and foremost, this was about bringing the global world of horse racing closer together, and to celebrate the racing career of a once in a generation type of horse.

The Longines World’s Best Racehorse Rankings are established by international handicappers according to the performance of the horses in international top races. The Japanese star Just A Way was named the 2014 Longines World’s Best Racehorse, with a rating of 130. This year, 130 would not be near good enough, due to the exploits of American Pharoah.

American Pharoah actually had the top two, and three of the top five rated performances worldwide this year, but it was his overpowering victory in the Breeders’ Cup Classic that outpaced his global competition for today’s honor. His rating of 134 qualifies him as the highest ranked American performer since Cigar twenty years ago. Behind American Pharoah, came Golden Horn at 130, and tying for third at 126 were the ill-fated American champion Shared Belief, and the two-time Arc winning mare, Treve.

On the behalf of Shared Belief, Janet Rome, filling in for her husband, Jim, who was unable to attend, gave a wonderfully emotional speech for the third-place award, in remembrance of their fantastic little gelding.

The connections of American Pharoah -- owner Ahmed Zayat, wife Joanne, son Justin, as well as trainer Bob Baffert, wife Jill, son Bode, and jockey Victor Espinoza, all made the trip to London to be there for today’s ceremony, and in fact, sat at the next table over from my seat. As usual, they were very gracious in acceptance of the award, and humble in their own place on the team, each giving most of the credit to the great horse -- their great horse.

Their acceptance of the award was preceded by a fantastic short video of American Pharoah put together by my friend Amanda Duckworth and team of the IFHA. It was definitely a goosebump moment. Besides the trophies that came along with being named Longines World’s Best Racehorse, Zayat, Baffert, and Espinoza were gifted with specially designed Longines watches to honor the first Triple Crown victory in nearly four decades. I was able to see each after the ceremony, and they truly are works of art.

Presented for the first time, the Longines World’s Best Horse Race award went to the Qatar Prix de l’Arc de Triomphe with a rating of 125.75. Recognizing the best-rated race, the ratings of the top four finishers in each race over the past three years served as basis for the assessment by a panel of international handicappers. Won by Golden Horn in 2015, the Arc outscored the Breeders’ Cup Classic, which was voted the world’s second best horse race, with a rating of 124.33

A special thanks is due to Longines, the high-end Swiss watchmaker is currently the most visible brand name in horse racing throughout the world, and that is by no accident. They support the sport of horse racing like no other company, and in today’s ceremony, they put on an absolutely fantastic event at the iconic London hotel Claridge’s. Their partnership with the sport is a long and strong one, and for the good of horse racing, is one that I hope continues to shine for many years to come.

In summation, today’s was a most memorable event, and one that I believe is great for the sport on a global scale, and … American Pharoah is officially the World’s Best Racehorse!