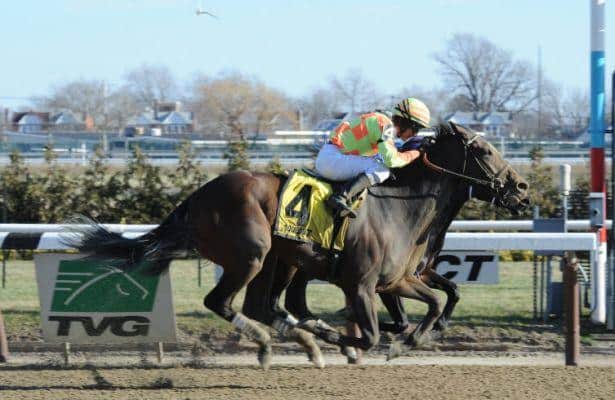 In a race named for the great American mare from the 1960’s, it was the two-time Grade 1 winner, Belle Gallantey, who was supposed to stand head and shoulders above her competition in today’s Affectionately Stakes at the Big A. Today would not be her day, though, leaving the Aqueduct feature to a pair of younger fillies to stage a thrilling finish. On the shadow of the wire, it was America just getting her nose in front of the longtime leader of the race, Penwith.

Owned and bred by celebrity chef, Bobby Flay, and trained by the Hall of Famer, Bill Mott, America is a newly turned four-year-old daughter of A.P. Indy, who appears to be really coming into herself of late. Before today, her most notable performance had been a 3rd-place finish in the Grade 1 Mother Goose, albeit well behind the romping winner, Untapable.

After eight consecutive losing stakes attempts, the well-bred filly was dropped down into allowance company, and responded with a 6 ¾-length win in an off-the-turf allowance at Aqueduct in early November. She then repeated with a 1 ¾-length win over the Big A winter track in early December. Perhaps spurred on with a newly earned confidence, America was re-entered in stakes racing, and today would prove to be her best race yet.

Penwith, the 4-1 second choice, went out right to the lead, while the heavily favored Belle Gallantey moved into a comfortable stalking position from her outside post position. Meanwhile, America trailed in last under her pilot, Junior Alvarado. The position of the three would remain the same through moderate opening fractions of :23.94 and :47.93. As the field headed into the far turn, Belle Gallantey, the 3-5 favorite, and 123 pound highweight, looked poised to make her move on Penwith, while America still had only one horse beat, but was beginning to make up ground on the outside.

Belle Gallantey would pressure Penwith on the turn, but as the field turned for home, the early leader spurted clear, and the favorite began to flounder, eventually finishing 5th. America was now running well on the outside, but inside the eighth pole, it appeared that getting up for 2nd was the best she was going to do. With Penwith swishing her tail, and three lengths in front nearing the sixteenth marker, America, in the yellow and orange colors of Bobby Flay, began to cut into her lead in earnest. Gaining with every stride, America collared the brave front runner just yards from the wire, and got up by a nose as the pair hit the finish line. After the race, the winning rider spoke about his mount and the exciting finish.

"She broke and got a little bit squeezed at the break, I just let her relax and get in a nice rhythm,” said Alvarado. “She's actually a filly where previously at the half-mile pole you had to start riding her hard because she didn't have a strong kick and would start to drop back, but today as soon as I started to pick it up with her she was ready to go - picking it up real fast. As soon as we turned for home I didn't know if we would get there, but I knew it was going to be close because she was responding well for me."

The final time for the 1 1/16 miles over the fast inner track at Aqueduct was 1:44.68. As the third choice in the field of eight, America returned $10.40 to her backers, while raising her lifetime mark to 13-4-0-2, and gaining her all-important first stakes victory.