Abel Tasman ready to chase her own triple 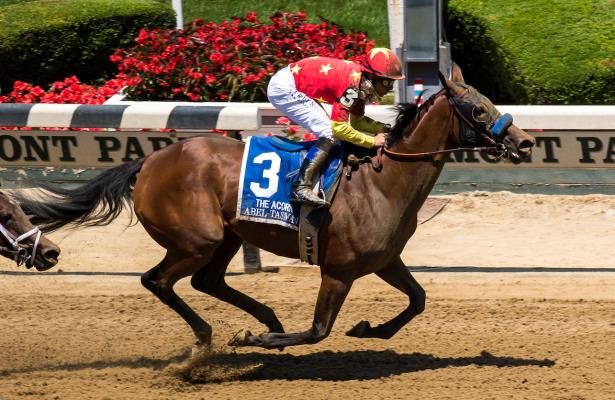 Win three Grade 1 races in your first eight career starts and you have effectively set the bar pretty darn high for yourself. Still, I get the feeling that we have not yet seen the best out of Abel Tasman.

The daughter of Quality Road will make her ninth career start on opening weekend at Saratoga, where she will likely rule a solid favorite in the Grade 1 Coaching Club American Oaks.

Already a Grade 1 winner when she was unceremoniously shipped out of the barn of trainer Simon Callaghan, and into the stable of the fastest gun in the West, Bob Baffert, Abel Tasman will put her two-race winning streak on the line on Sunday at the Spa. Those two wins came on the big stages of Churchill Downs and Belmont Park, when she came from way back in the slop to score in the Kentucky Oaks, and then cut the corner like a fine sports car in winning the Acorn.

In what will now be her fourth start for her Triple Crown winning conditioner, Abel Tasman will be going for her own triple of sorts in the historic CCA Oaks. Of course, the Triple Tiara is no longer a thing, but winning huge three-year-old filly races on Kentucky Derby weekend, Belmont Stakes Day, and opening weekend at Saratoga seems like a feat worthy of a tiara.

Owned in partnership by the China Horse Club and her breeder, Clearsky Farm, Abel Tasman likely has her connections full of confidence for Sunday's nine-furlong test. If you have not heard, the bay filly has been working up a storm of late.

Having won the Grade 1 Acorn on June 10, she has had three workouts at Santa Anita in readying for her appearance at the Spa. On July 1, Abel Tasman sped through four furlongs in bullet time of :47 flat. The following Saturday, she outworked the older male stakes winner, Cat Burglar, going six panels in 1:12.20. Then, this past Saturday, she took to task one of the hottest horses in training. I have not seen video of it yet, but look how it is described by a well respected turf writer ...

Abel Tasman just blew away Mor Spirit in a work at Santa Anita. Started two back, finished five on top. Absolutely breezed by in stretch.

The blitzing of the Met Mile hero in the five-furlong workout in :59.20, and all three of her works since the Acorn for that matter, are the moves of a very good horse. More than that, they look like the work of a horse who is both feeling her oats, and getting even better. Abel Tasman is clearly in fine fettle, as they say.

I was ridiculed several months ago when I suggested that perhaps she could be a filly good enough to try the Kentucky Derby, in this, a year devoid of any standout three-year-old males. Which is fine, it comes with the territory of having an opinion outside the norm, but now I am beginning to wonder again if Abel Tasman would be up to something special, as we move through the heat of summer, and into the big races of autumn.

A meeting with either of the big names among the older females, Songbird or Stellar Wind, before the Breeders' Cup would be something to get our attention. The Travers Stakes would be something even more special. Food for thought.

First things first; the Kentucky Oaks and Acorn winner needs to live up to my words, with another victory on Sunday in the Coaching Club Oaks. She's likely to face Salty again, who is a talented young miss in her own right. If she does that, and wins her third consecutive Grade 1 race, the sky then becomes the limit for Abel Tasman.