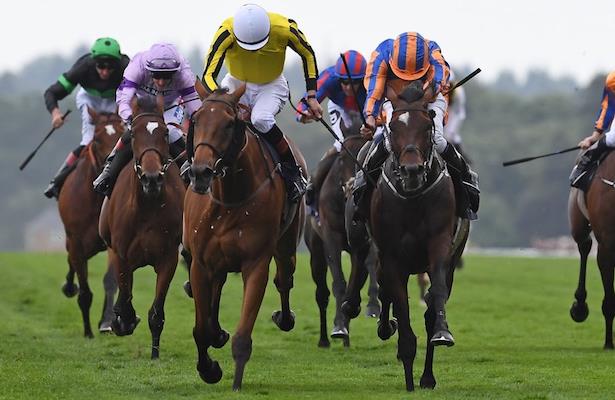 Of all the spectacular things I saw in my recent trip to Royal Ascot, from the magnificent facility and grounds, to the sensational engagement of the community and the fans, my favorite part of the visit had to be the amazing turf racing. The Royal meet at Ascot offered the best depth of grass horses I've ever seen in a lifetime of enjoying racing, and perhaps more than any other, the race I most savored was the Ascot Gold Cup.

The historic Group 1 affair featured an epic battle between the favored defending champion, Order of St George, and the outstanding son of Duke of Marmalade, Big Orange. While long distance turf running is relatively foreign to U.S. racefans, in much of the rest of the world it is a vital part of the sport in many racing destinations. In fact, in Australia, the two-mile Melbourne Cup is the race that stops the nation.

Well on Thursday, June 22, I witnessed long distance turf racing at its very finest. Two of the best in the game gave it everything they had on the big stage, one on the lead, and one coming from well back. This four-minute-plus race had everything you could want, including an amazing finish.

I'm not sure if I will ever make it back to Royal Ascot, but the stretch run of this race is one that I will never forget. It was that good. Therefore, it should come as no surprise that Big Orange, the gutsy winner, is a horse I plan on keeping tabs on for as long as he continues to run. I'm happy to report that the first start since Royal Ascot for the six-year-old gelding will come next week at Goodwood.

It is a race where the winner of 9-of-24 lifetime can make history if he can successfully defend his title in the Group 1 Qatar Goodwood Cup. The big gelding has won the two-mile test, worth about $650,000 American, two years running, so if he can win next Tuesday, he would become only the second horse to win the race, which dates back more than 200 years, three times. Furthermore, a victory for Big Orange here would make him the only horse to win the historic race three straight years.

Michael Bell says this about the future of his stable star, "Big Orange is six now but for a stayer that means he is just coming into his prime. He is a young horse and has only run 24 times - he is not exactly over-raced. He won't be going back to the Melbourne Cup this year because he will have too much weight. He will go on racing for at least a couple more years if possible. Stayers are just coming into their own at six and there is no reason why he should not be as good as he is for the next couple of years."

Big Orange has not had much luck in his two trips to Melbourne Cup, with a 5th-of-24 in his first attempt, being his best result. He has done well everywhere else, though, including just missing in last year's two-mile Dubai Gold Cup at Meydan, in a typically brave performance. I should have become a big fan of Big Orange after this one.

In his recent visit with Goodwood press, Bell went on to express what a pleasure it is to train Big Orange, "We keep his training simple - he goes up Warren Hill once a week on his own to work - on Saturdays usually and over seven furlongs on the peat-moss gallop when it is open. He trains on his own which is unusual for a stayer. He is an easy horse to keep fit as he does not need a lot of work - he is very clean winded and has a great lung capacity. He may have a tiny blow on Saturday but I think he is ready and now I have got to not mess him up. He is a gentle giant. He is getting used to the attention and is a real character."

And if you think that Big Orange is nothing more than a specialist at the marathons, it should be noted that he has twice won the Group 2 Princess of Wales's Stakes at Newmarket over a distance that must feel like practically a sprint for him, as that prestigious race is only 1 1/2 miles.

Frankie Dettori will be in the saddle on the big horse at Goodwood. Listen here as the legendary rider discusses his appreciation for the game Big Orange, in advance of his quest for history in Tuesday's Group 1 Goodwood Cup ...

I can only imagine how it must feel for Dettori to ride a horse so willing to give everything he has. As you can probably tell by now, Big Orange more than won me over during my trip to England. I am now a big fan of his, and I enjoy long distance turf racing more than ever, thanks to this year's Ascot Gold Cup.