A Duty to the Fans or: ZATT’s Star of the Week, is … Songbird! 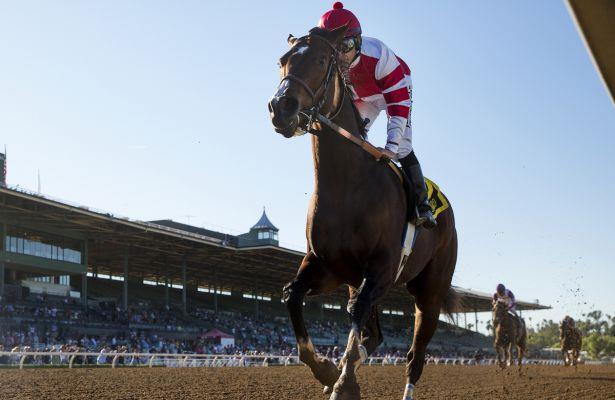 I believe I have a duty to the fans.

In plenty of ways, I thought Frosted was deserving of being named ZATT’s Star of the Week. After all, how rare is it to see an American runner dominate an important race internationally? While we can debate how important the Al Maktoum Challenge – Round 2 really is, and the level of competition found in this edition, there can be no denying the fact that the four-year-old son of Tapit blew the doors off his competition. It was the perfect way to begin the season for the Godolphin/Kiaran McLaughlin charge. The Group 2 race, one of the key preps to the $10 million Dubai World Cup, was won in high style and in track record time. Obviously, I was impressed, and more than that, I saw it as a win for American racing on a global scale.

Then the Las Virgenes happened. Like most, I was expecting to see an easy win for the Champion 2yo Filly of 2015, but what Songbird did on Saturday exceeded expectations. It was fantastic. It was a performance that those who watched will not soon forget. The Fox Hill owned, and Jerry Hollendorfer trained star blitzed her competition in such a way, that even a blind man could see that she was miles and miles superior to her Grade 2 competition. The type of response her win drew from fans on social media was something to see. It was Zenyatta and American Pharoah like. Sure, the romping win was against a suspect field, but her talent and ability cannot be mistaken. Songbird’s runaway and geared down victory on Saturday, has fans truly excited about what we might see in 2016. Kentucky Derby or no, she is the hottest thing going since, well, since American Pharoah.

In truth, Mshawish beat the strongest field of the week, but his victory lacked the kind of spectacular quality of both Songbird and Frosted. Plus, I did not believe this running of the Grade 1 Donn Handicap to be an especially strong one. That really boiled my decision down to Frosted and Songbird, but who would it be?

Not to stick it to the decision makers over at Sports Illustrated one more time, but I will. That is what they missed with the whole let the fans have a say in the Sportsman of the Year online poll of theirs. They asked for the input of the fans, and then they completely ignored them. I will never do that. I knew I had a tough decision to make this week, so I put it out there for the fans. The mandate was clear.

Granted, who wins my weekly star of the week may be pretty small potatoes in the grand scheme of things, but the voice of the fans is not. I am a fan.

ZATT’s Star of the Week, is … Songbird!