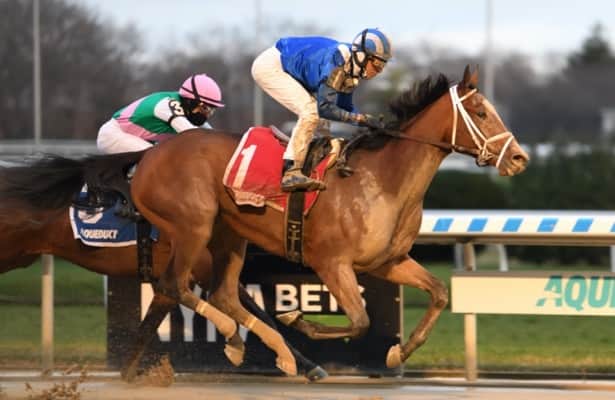 When talking about the top candidates for the 2021 Kentucky Oaks, look no further than Curlin, the two-time Horse of the Year turned top sire.

After Malathaat and Millefeuille ran 1-2 in last fall’s Grade 2 Demoiselle Stakes, it was a clear indication that both daughters of Curlin would be fillies to watch on the road to the Kentucky Oaks. Neither have yet made their seasonal debuts, but both remain very promising candidates as we move closer to the most prestigious race in the country for 3-year-old fillies.

The Demoiselle pair also have been joined by impressive recent winners Clairiere and Curlin’s Catch, giving the Hill ‘n Dale sire an extremely strong hand 2 1/2 months out from the big race. In fact, I include all four in my current top 10 for the Grade 1 race scheduled for Friday, April 30.

Topping the list is Clairiere. After two very promising races at Churchill Downs last year, the product of the mating between Curlin and the multiple Grade 1 winner Cavorting took another big step forward on Saturday at Fair Grounds.

Making her 3-year-old debut, the Stonestreet Stables homebred broke from the rail and was last early in the Grade 2 Rachel Alexandra. Picking up horses on the turn, she emerged from the pack as the only challenger for another very good filly in Travel Column. She switched to the outside and was able to win by a neck in a spirited stretch duel.

Already battled tested in two races against Travel Column, and improving with each start, the sky's the limit for Clairiere.

Next you have Malathaat, who is the only undefeated filly of the four. Like Clairiere, she is regally bred. Her dam is Dreaming of Julia, an extremely talented Stonestreet filly who was a troubled fourth in the 2013 edition of the Kentucky Oaks as the favorite. Sold to Shadwell at auction, Malathaat brought $1,050,000 at the Keeneland September Yearling Sale.

Sent to multiple Eclipse Award winning trainer Todd Pletcher, she has done nothing to disappoint so far. Heavily favored in each of her three starts, she won at first asking at Belmont Park going 7 furlongs. After that, she became a stakes winner, taking home Aqueduct’s Tempted Stakes by nearly 8 lengths.

Then came an unusual run in the Grade 2 Demoiselle, where she looked like she was not getting hold of the sloppy track for much of the race before turning it into high gear late.

Working in South Florida, Malathaat could make her seasonal debut a week from Saturday in Gulfstream Park’s Davona Dale Stakes.

The filly she beat with that impressive burst of late speed is Millefeuille. Trained by Bill Mott, she also has pedigree on her side, being out of a regally bred War Front mare. Although she has won only once in three starts, she progressed nicely each time.

After a good runner-up finish in her debut at Belmont Park, she came right back to win next time by four lengths. Moving to Aqueduct, she looked home free in the Demoiselle but was swallowed up late by the impressive burst by Malathaat. Working out this winter at Payson Park Training Center, the Juddmonte homebred should be ready for her seasonal debut soon.

Finally, we come to Curlin’s Catch, who probably doesn’t have the buzz yet of the others but looked very good in winning the recent Suncoast Stakes at Tampa Bay Downs. Second in a maiden and then fifth in a stakes race, both on Woodbine’s Tapeta surface, in her only two starts at 2, the Canadian-bred filly has taken to the dirt in her two starts so far this year.

An easy win on the front end in a maiden race at Gulfstream Park was followed by her first stakes victory. Trained by Mark Casse, she split horses on two occasions to win the Suncoast impressively. Out of an A.P. Indy mare, she should only get better as the distances increase.

Already one of America’s best stallions, 2021 looks to be a very big year for the champion son of Smart Strike. And as far as the Kentucky Oaks is concerned, Curlin is absolutely loaded with these four very talented fillies.