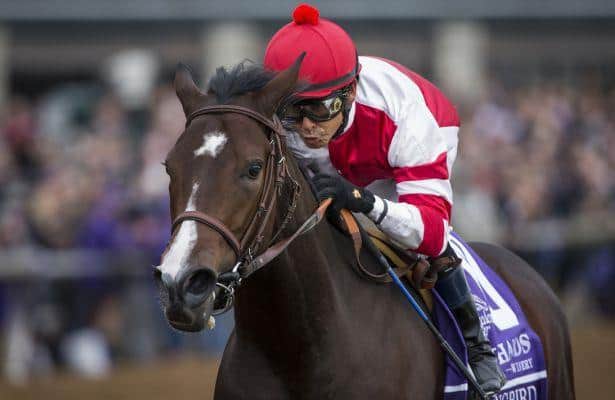 Whether we agree with their decision or not, Rick Porter and Jerry Hollendorfer, seem to be pretty confident in their decision that the Kentucky Oaks, and not the Kentucky Derby, will be the best plan for Songbird's first major goal of the three-year-old season. That being said, it should come to zero surprise that the undefeated champion sits atop my list of 2016 Kentucky Oaks contenders. She was marvelous in each of her four victories as a juvenile, and she looked even better in winning the recent Grade 2 Las Virgenes with complete authority. Granted the competition will get considerably stronger by the first Friday in May, but at this point, she not only looks like the filly to beat in the Oaks, but she looks like the finest three-year-old of either gender. The loss for the Derby, is the gain of the Oaks.

With all these good American fillies, what is a filly from Dubai doing this high on my list? That should tell you just how good the American-bred filly has looked in each of her three starts at Meydan. A maiden just over two months ago, she has taken Dubai by storm. Her win today in the UAE 1000 Guineas was a real laugher, as she found another gear down the Meydan stretch to completely decimate her competition. There would be little argument that she is the best 3yo in Dubai, male or female. Her pedigree is filthy with strong American dirt influences, like A.P. Indy and Unbridled, so it should come as no surprise that the Kentucky Oaks is in her sights. She likely will have one more start overseas, before coming to the United States as an undefeated filly. An undefeated filly, and a real threat to the Americans.

Fans of Carina Mia were happy to see the impressive winner of the Golden Rod return to the work tab recently in South Florida. Now with three workouts under her belt, she should be nearing ready for her sophomore debut. A seasonal debut which could come in the Davona Dale at Gulfstream Park. Ultra impressive in her two most recent races, she looks to be a filly who should have no problem handling nine furlongs and beyond. A daughter of a sire of a Kentucky Derby winner, and a half sister to the Grade 1 winning Miss Match, the $410,000 yearling purchase was always intended to be a quality two-turn horse. She was defeated by the highly regarded Stageplay in her career debut, but came back to decisively beat that one in a wet edition of the Golden Rod at Churchill Downs. Having already been tested by at least one top filly, her future looks nothing but bright under the skillful direction of Bill Mott.

As the only daughter of one of my all-time favorites, it is easy for me to root for Rachel's Valentina. It is also easy to appreciate what the daughter of Bernardini accomplished in only three starts as a juvenile. A rallying win against good fillies in her career debut at Saratoga, was followed by a solid score in the Grade 1 Spinaway Stakes, also at the Spa. She then followed that up with a strong effort when clearly second best to the top one in the Breeders' Cup Juvenile Fillies. With that experience, there is every reason to believe she will only get better. If that's true, she is bound to be an extremely classy three-year old. Tempering the enthusiasm just a bit, it should be noted that of the big six, she is the one with the least amount of work in this year. She's back now, though, so here's to hoping she quickly gets the seasoning in that she needs to be ready for a second encounter with Songbird.

It's not easy to place this one all the way down at #5, but the truth of the matter is that #2 through #6 are all pretty close for me at this stage. In her debut win at Parx, a minor stakes at Laurel, and the recent Grade 2 Forward Gal at Gulfstream Park, she absolutely overwhelmed her competition. In the last one, she had to overcome trouble to win going away by five lengths. In looking towards the Oaks, though, she does have some catching up to do. She is the only one of the big six who has not yet run at the minimum of a mile. I also believe that she has not faced anything near what is soon coming. These are all questions she seems capable of answering, but until she does, I am going to keep her below the four above her. Having said that, with her excellent race over the track, she does loom the one to beat in the Davona Dale even if it does attract both Carina Mia and Rachel's Valentina.

The first of three in the top ten for trainer, Steve Asmussen, the daughter of Curlin has already found the winner's circle in 2016. It took place in New Orleans, where she scored a facile victory in the first of the Kentucky Oaks preps at Fair Grounds. While solid enough, I am not sure that win in the Silverbulletday was good enough to beat anyone above her on this list. No reason why she won't improve, though, and in splitting decisions last year with Carina Mia, the solid #6 proved that she does have a considerable amount of class. She also is proven over the Churchill Downs main track, which should not hurt a bit 85 days from now.

After getting through the top six, that is where the questions really begin to arise. This one's been confined to sprinting in her first five starts, but with her breeding, there is good reason to believe that she can successfully stretch it out to the nine furlongs of the Kentucky Oaks. After having been turned away by Rachel's Valentina in only her second career start, the daughter of Bellamy Road has continued to improve. Beating up on the winter horses at Aqueduct does not always translate to success against the best, but her ten length demolition of a short field in the Ruthless demonstrates that she is heading in the right direction, and is ready for more serious challenges. I very much look forward to seeing her first two-turn race.

Even though she has been beaten in her last two, there is still plenty to like with this LNJ Foxwoods owned filly. Her win in the Grade 1 Frizette was stylish. The question being -- how much of that stylishness can be attributed to the wet track? Her Breeders' Cup was OK, but maybe slightly disappointing coming off the nice win, and probably indicative of how good the top one is.  As for her return race in the Martha Washington, I thought it was better than it looks on paper, as she did not have much room to come through on the rail, but she did. Unfortunately, she weakened a bit late, and lost a close decision. Despite the loss I still feel like Nickname is the best young filly right now at Oaklawn Park. Finally, success for her furthers the memory of the dear, departed Scat Daddy.

The $400,000 yearling purchase of Whisper Hill Farm has yet to race as a 3yo, but should be fit and ready for her debut, having put in five workouts in the past month. She actually was one of the ones I gave a chance to compete with Songbird last year in the BC Juvenile, but that did not pan out, as she struggled home in the middle of the pack. But there was sure plenty to like in her first two efforts, including a fast finishing second in the Spinaway. I am willing to give her the benefit of the doubt, as she shipped, had only two previous races, and had never been two-turns before Keeneland. Of course, none of those exact same factors seemed to bother Rachel's Valentina much. Still, I rate the daughter of Tapit as one of the ten most interesting sophomore fillies early in 2016.

I easily could have gone with the big maiden winner from last fall, Inheritance, in this spot, but instead I went with the flashy Cal-bred. Yes, I know she failed in her only attempt against open stakes fillies, but I see the real Pacific Heat when I look at her three dynamic and impressive victories. Besides, she was hung out way wide in the Starlet. I am going to draw a line through it, as they say. I also realize that her big win in the recent Cal Cup Oaks came on turf, but to me, she just looks like a real runner, no matter the surface. Not sure where they go from here, and whether or not they make a point to avoid Songbird, but I for one, will be expecting to hear a lot more from this filly in the coming months.