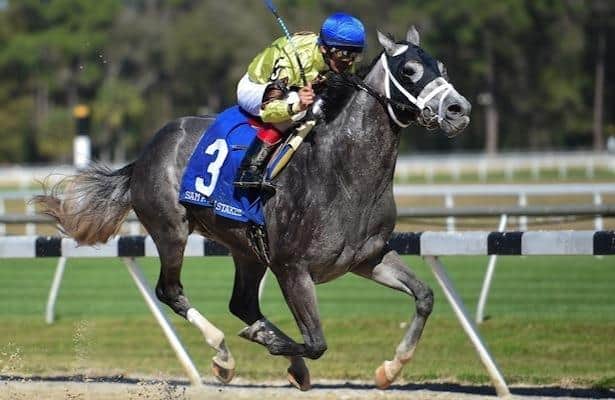 As the Sam F. Davis field swung into the homestretch at Tampa Bay Downs, it looked like the Todd Pletcher trained Destin was in with a chance, but it was Rafting, from the Graham Motion barn, who had more momentum and appeared poised to run right by to victory in the Grade 3 prep for the 2016 Kentucky Derby. Destin had other ideas, though, and the grey colt dug in and rebuffed the challenge from the outside rallier to score a rather emphatic 2 ¼-length victory, while Rafting finished much the best of the rest. It was a stylish performance that you may have thought would have rocketed the well bred son of Giant’s Causeway up many a Derby list. As of yet, it has not happened. Few seem to be talking about Destin, who was not even one of the 23 single betting interests of the Kentucky Derby Future Wager – Pool 2, which was conducted the same weekend as his initial stakes win. I believe it is time we do start talking about Destin. He is this week’s Under the Radar Spotlight horse.

The Sam F. Davis performance was a marked improvement for the $400,000 yearling purchase of Twin Creeks Racing, after having finished fourth of nine in the Grade 3 Lecomte Stakes in his previous start. Improvement can be expected, though, of the leggy colt, who has only made four career starts, and did not make his career debut until October. He’s also younger than most of his peers, as an April 16 baby. It is this room for improvement, that was at least partially manifested in his last at Tampa Bay, that makes him such an interesting prospect. Well, that and his outstanding bloodlines.

A son of one of the best stallions in the world, in Giant’s Causeway, Destin was produced by the consistent daughter of Siberian Summer, Dream of Summer. A millionaire and Grade 1 winner, you may know her better as the dam of Creative Cause. Another hard-hitting millionaire, Creative Cause never ran a bad race in his career, with a solid fifth place finish in the Kentucky Derby being the only time he finished out of the money, while running in nothing but big races after breaking his maiden at first asking. He also was a son of Giant’s Causeway, making him a full brother to Destin.

Destin may not have had all the early success enjoyed by his full brother, but he is quickly making up for lost time for his high profile connections. Respected at 9-2 for his career debut, he rallied nicely after hitting the gate at the start. The late run, after the trouble, was enough to carry him to a one-length victory in the seven-furlong maiden race at Belmont Park. It was by no means a dazzler, but showing the ability to overcome an obstacle in your first start is always a good sign.

Perhaps demonstrating that he still had plenty of learning to do, Destin was defeated in each of his next two starts. First he chased Golden Ray all the way around the track, to finish second by 1 ¼-lengths in the one-mile allowance race at Gulfstream Park. He was an odds-on favorite that day, which was his only other start as a juvenile. Then he could only make up moderate ground to get up for fourth, beaten five lengths by winner Mo Tom, in the Lecomte Stakes. Neither of the losses were bad efforts, but certainly improvement was needed if he wanted to make it to Louisville. It is worth noting, that while he only has made four lifetime starts, Destin has already traveled quite a bit, having made each start at a different track.

As mentioned, improvement did come in the Sam F. Davis win. Now, the colt with a career 4-2-1-0 mark and likely headed to the Grade 2 Tampa Bay Derby next, will need to prove he belongs in the starting gate of the Kentucky Derby. Destin may be behind a number of his contemporaries to this point, in both experience, as well as qualifying points, but as a well bred colt on the upswing, making his second start at a track where he already is an impressive graded stakes winner, he would seem to be a horse that demands respect. A win there would be enough to get him to Louisville, where further improvement could make him one to watch.