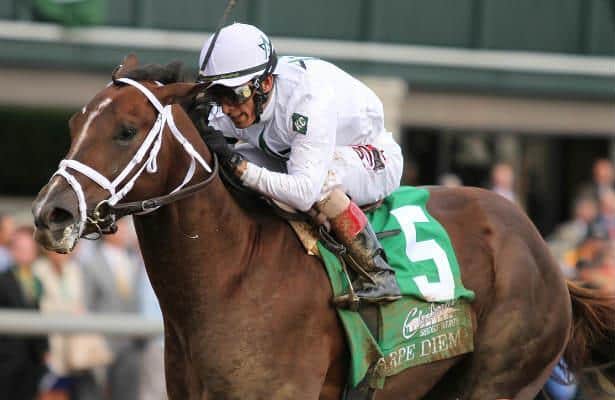 Overview - Owned by WinStar Farm and Stonestreet Stables, and trained by Todd Pletcher, Carpe Diem currently stands as the 20-1, third choice, on the most recent 2015 Kentucky Derby future odds from Wynn Las Vegas. With three very good juvenile performances under his belt, the good looking son of Giant’s Causeway was one of the top two-year-olds in the nation, and his prospects to progress as a three-year-old are promising. Following his trip West, and subsequent second place run in the Breeders’ Cup Juvenile, Carpe Diem will get a short break and winter at Pletcher’s winter base at Palm Meadows in South Florida. His most likely path to get to the Derby will begin at Gulfstream Park.

Race Record (3-2-1-0) - Carpe Diem began his racing career solidly, taking a 5 1/2 furlong maiden special weight race at Saratoga, wire-to-wire on the first day of September. Sent off as a big 7-10 favorite, the $1.6 million 2yo in training purchase demonstrated his superiority by setting fast early fractions, before turning away a challenge early in the lane, on his way to a facile 2 ½-length score in a snappy 1:03.99.

From there, he stepped right up in both distance and class. On paper, the Grade 1 Breeders’ Futurity, with a field of 12, running 8 ½ furlongs, looked like a tough spot for his second career start. Carpe Diem made it look easy, though, as he stalked the early pace and grabbed control of the race on the far turn. He left the large field in his wake, after that, rolling to an eye catching 6 ¼-length romp at Keeneland.

Carpe Diem’s final start of the year came at Santa Anita in the Breeders’ Cup Juvenile, where he was on the other end of a 6-length plus victory, finishing second to the impressive winner, Texas Red. He uncharacteristically fell well behind early, and had to race well wide on the turn, and into the stretch, but rallied strongly down the middle of the track to get up for place money over Upstart in the final stride.

Pedigree - Carpe Diem was purchased for $1.6 million for more than just his looks and a fast workout in front of sales watchers. Out of the graded stakes placed Unbridled’s Song mare, Rebridled Dreams, he is a half-brother to stakes winners on both sides of the Atlantic. Grade 1 winner J.B.’s Thunder in the U.S., and Doncaster Rover, a durable multiple stakes winner in England, along with Carpe Diem, give his 14-year-old dam three stakes winners.

His sire Giant’s Causeway remains one of the world’s top sires, and on the track he displayed his class and versatility by running a strong second in the Breeders’ Cup Classic in his dirt debut at the same distance and track as the Kentucky Derby. Combined with the female side of his pedigree, the ten furlongs of the Kentucky Derby would seem to be within the scope of Carpe Diem.

Strengths - Besides the excellent racing record and pedigree already mentioned, Carpe Diem has already accomplished a few things that most juveniles never do. He has run well from three different early race positions; on the lead, close to the pace, and way back early. This tactical nature, and ability to adapt, should suit him well on the trail, as well as in a difficult race like the Kentucky Derby.

He also has already proven to travel well, having gone from New York, to Kentucky, to California, while bringing his “A” game to each region and racing surface.

Weaknesses - Not much to say here, but despite being as successful as any American trainer in the 21st century, Todd Pletcher, has had several top youngsters not hold up on the Kentucky Derby trail, and if they did make it to the first Saturday in May, the Hall of Fame trainer sports only a 2.5% winning percentage.