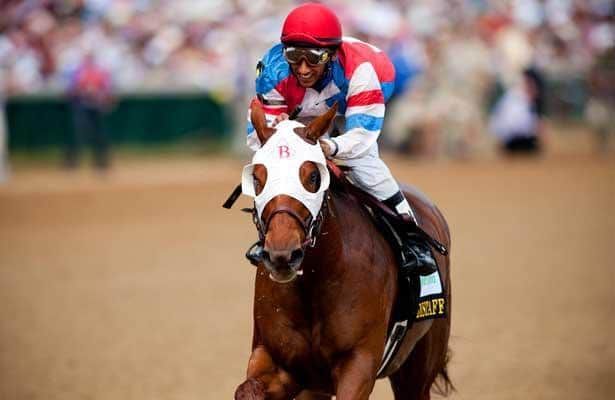 When owner/breeder/trainer, Buff Bradley says this about the reigning Female Sprint Champion, Groupie Doll, “I have not seen her so focused for this long a period of time and I am feeling real good about her. She’s ready to go. I’d like to keep her like this for the next six weeks,” you just know it could spell major trouble for her competition in Saturday’s Grade 2 Thoroughbred Club of America.

Groupie Doll will be looking for a repeat trip to the TCA winner’s circle after dominating this Keeneland race by 6 ½ lengths last year. Unbeaten in her last six sprints, the five-year-old mare already did the two-time thing in her last race when she broke the track record while winning her second Presque Isle Downs Masters. Looking ahead just a bit, the Breeders’ Cup Filly & Mare Sprint will be the third, and most important, race in which the 2012 Eclipse Award winner will look to do just as she did last year. First business at hand, though, is Keeneland

Groupie Doll signaled her readiness for the TCA with a solid half-mile work over a fast track Saturday morning at Churchill Downs in :48.20, which prompted Bradley’s continuing confidence. As much as her main man believes in her, she will still face some fierce competition in the six furlong test, including a few fillies that just love the synthetic surfaces. As of today, here are the five considered likely to oppose the Doll.

Gypsy Robin - Welcome to the Jungle, or more specifically, Jim Rome’s new fleet footed filly. A sharp winner of the CERF Stakes in her second start for the king of sports, news, and smack, Gypsy Robin is no joke on synthetic surfaces. The four-year-old daughter of Daaher sports a perfect 3-for-3 record on Keeneland’s Polytrack including a blitzing of the field in last fall’s Grade 2 Raven Run. Her last race, also only her second of the season, points out that she may now be ready to throw down with the Queen of Sprinters.

Judy the Beauty - Another who is unbeaten at Keeneland, Judy the Beauty bounced back from being scratched after flipping in the Ballerina starting gate, to run a better than it looks third-place finish behind Groupie Doll and Purely Hot in the Presque Isle Downs Masters. Not the beneficiary of the best of trips that day, her trainer is looking forward to taking another shot at the reigning champ. “I think when you have a game in your own backyard, you have an advantage,” said Wesley Ward.

Purely Hot - Hot, hot, hot. That’s what this reformed claimer has been at her home base of Presque Isle. Claimed for a measly $4,000 last December, the Nick Caruso trained miss rattled off five straight fast wins in Northwestern Pennsylvania, before giving Groupie Doll something serious to think about in the Masters. Away from her friendly confines, the question looms whether or not she can compete with this kind, but you have to respect her form.

Livi Makenzie - Could be the longest shot in the field, but you don’t have to go too far back in her form to see her ability to prove tough at this distance. The winner of the Saylerville Stakes two starts back, has finished first or second in 7-of-10 starts at three-quarters of a mile, and led Judy the Beauty in the stretch of a meeting they had at Keeneland this spring.

Tanglewood Tale - Another reformed claimer, the gray daughter of Tale of the Cat comes in off of three straight sprint wins in New York. In each of those races at Saratoga and Belmont, Tanglewood Tale earned speed figures that point out that she will enter Saturday’s race in by far the best form of her career.