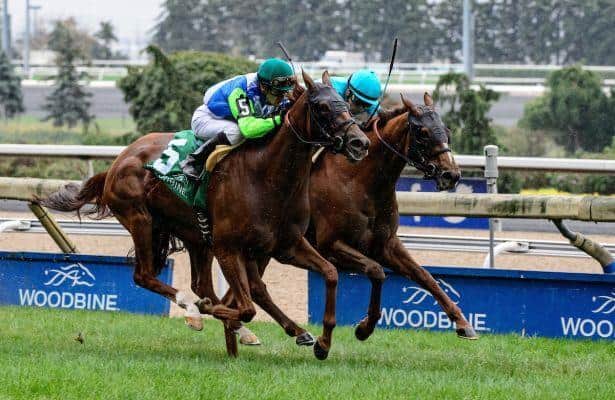 When I started doing research for an article on sires who pass on durability to their offspring, I didn’t realize how challenging it would be. Whether it’s because of the focus on breeding for speed above all else, or whether it’s because of modern training practices, there simply aren’t many sires left who have shown the ability to sire quality racehorses able to run a lot of races in their careers.

As I looked through the data on the sires whose offspring showed the greatest durability, I found one horse after another who were deceased, pensioned, exported to another country or whose offspring were durable but slow as a tortoise. One horse (Unusual Heat) was even pensioned the night after I finished my first draft of the article. It wasn’t easy, but I did eventually come up with a short list of horses currently at stud in the United States whose offspring show durability and enough ability to be worthy of consideration for breeding.

Before I get into that list, there’s one deceased stallion who was such an outlier that he’s worthy of mention. The offspring of Fortunate Prospect averaged 30 starts in their careers. The group with the next most durable offspring all had offspring averaging 27 starts. To give you an idea of what a large gap that is, any of the others would have needed to sire at least 7 more horses who each started 100 times to reach the level of durability that Fortunate Prospect passed on. Also of interest is that one of his grandsons is among the five sires who I’ll discuss later in this article.

To give an idea just how hard it is to find sires who are still standing in the United States and produce durable offspring, I had to lower my cutoff all the way down to an average of 17 starters to find any sires who produce fast enough offspring that I’d consider them worthwhile for breeding. While their ranking on overall earnings wasn’t one of the criteria I used as a measure of quality, all five of the sires I selected were between #50 and #98 ranked by total earnings of offspring so far in . All five of them have at least 300 offspring who were part of my evaluation. So they’ve proven themselves over fairly extended periods and sufficient sample sizes.

From highest listed stud fee to lowest, here are they are:

Apparently whatever soundness issues Unbridled’s Song has (and passes on to his offspring) didn’t come from Unbridled, as Broken Vow is at the opposite end of the durability spectrum.

The damsire of Successful Appeal is Fortunate Prospect.  So he comes by his durability honestly. I suspect that durability tends to run in families (despite the counter-example of Broken Vow). Trippi (who is currently at stud in South Africa) had offspring who raced an average of 20 times when he was still in the U.S. and the offspring of his sire (End Sweep) averaged 26 starts.

I had to cheat a bit to get Smarty Jones on the list. His offspring have “only” raced an average of 16 times. That said, he’s one of the younger horses on this list, so his offspring have raced during a time when horses don’t race as frequently. Had he started his stud career earlier, it’s likely that his offspring would have had substantially more starts. The only caveat with him is that the quality of his offspring may have been boosted by the high quality of mares sent to him early in his career. However, with his extremely reasonable stud price and his recent return to Kentucky, I wouldn’t be surprised to see a rebound in his reputation over the next few years.

In my next article, I’ll discuss a potential metric for a sire’s tendency to pass on durability to their offspring, and will provide a list of some of the highest scorers on that metric. If you’re interested in seeing the ratings for any specific stallions, comment here or send me an email at zelvin30@hotmail.com to let me know.

Meet Alex Zelvin
Alex is a lifelong horse racing fan and statistics nerd. He combines those interests in a passion for statistical analysis of thoroughbred pedigrees.
Alex is currently building a model to predict the on-track success of any real or hypothetical mating. If you're interested in keeping up with his progress in-between articles here, he'll be posting frequent informal updates at his blog (thoroughmetrics.blogspot.com), where you can also sign up for his email update list.
He can also be reached at zelvin30@hotmail.com if you're interested in consulting with him or just discussing pedigree analysis.