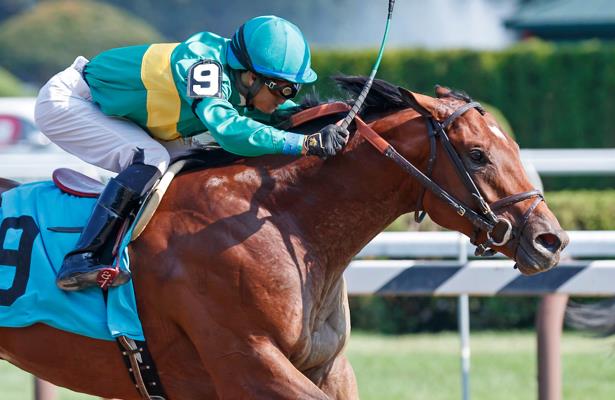 We came really close to hitting this thing Thursday. Incorporating my off-the-turf selections in races with surface changes meant a ticket that went 4-for-5, and our undoing came in a race won by a horse I’d have used had it stayed on the turf. “Almost” doesn’t count in this case, so we were left with a tough beat.

Friday’s card struck me as a lot of fun. There’s room to get a price or two home, and I’ve got a $72 ticket that assumes we stay on the lawn. If we don’t, I’ll have alternate selections I’ll note as we go along.

I’m starting off this sequence by spreading in the first two legs. #7 CLEAR FOR ACTION has won three of his last four starts and goes to the sharp Eddie Kenneally barn, but he takes a sizable step up in class, so it’s not like he towers over what seems like a solid group.

I’m also using #1 TACTICAL PURSUIT, #2 WILLING TO SPEED, #9 RHODE ISLAND, #10 WHISKEY IS MY WINE, and #11 CROSS BORDER. In all honesty, those with deeper pockets or multiple singles may very well want to buy some security and hit the “ALL” button. This isn’t an easy race, and it’s tough to see a scenario where one can have too much confidence taking a stand.

If this goes to the main track, I think #13 SOUL FIGHT will be tough to beat. His maiden win was sharp, and he’s bred to love a two-turn route of ground. I’ll keep Tactical Pursuit on the ticket, as he’s won over a muddy track before and seems to be in good form.

This is a really cool turf marathon event that’s drawn some intriguing horses. It wouldn’t be a huge shock if this race’s winner showed up in a stakes race later in the meet, and much like in the opening leg, I feel the need to buy ample coverage.

#9 PILLAR MOUNTAIN is the likely favorite coming off of a win in a race at this distance downstate. He showed a big closing kick that day and was second at this route a year ago. He’s logical, but early speed is often dangerous in turf marathons, so it’s not easy to trust closers.

I’m also using #2 CAPE ANGEL, #7 LEMONIST, #8 KULIN ROCK, and #10 CRACKSPEED. Cape Angel and Kulin Rock both intrigue me at prices, while Lemonist and Crackspeed are both in strong form.

If this gets taken off the turf, I don’t think it gets any easier. #12 TURCO BRAVO’s best race would crush these, but he hasn’t run that sort of race in years. Crackspeed and Lemonist both have dirt form, as do #1 KREWE CHIEF and #6 MIDNIGHT TEA TIME.

I can’t see this as anything other than a two-horse race. #2 ENGAGE and #1 SEVEN TRUMPETS faced off a few times as 3-year-olds, and both come off of long layoffs here. I prefer Engage, and I’m singling him in this spot. Six furlongs seems like his ideal distance, and he’s been working very well at Saratoga ahead of his 4-year-old debut. I respect Seven Trumpets, who has worked well, too, but he may be better at seven furlongs or a mile.

The Friday feature drew a field of six, and half of these runners are conditioned by Chad Brown. I’m using one of them, but there’s another in here that I think you need to consider.

#7 BLOWOUT seems like the one to beat. She’s yet to run a bad race through four career starts, and in just her second career outing, she was beaten just a half-length by eventual Belmont Oaks winner Concrete Rose. She’s versatile, and could sit an ideal stalking trip.

However, the Chad Brown group’s presence could drive up the price on #2 THE MACKEM BULLET, who has been freshened since winning the Grade 2 Appalachian at Keeneland. She’s got a steady string of five-furlong works ahead of this race, and she’s flashed potential ever since a strong 2-year-old campaign in Europe (one that included a second-place finish in a Group 1).

Todd Pletcher holds a powerful hand in the Friday finale. #6 RANGER UP will almost certainly be favored, #5 FINAL SAY will take some money, and either of these 3-year-olds could win.

I’m using them both, as well as 12-1 shot #4 SUPER SILVER. This one ran well two back when third against similar-level foes at Churchill Downs, and she makes her first start for Bruce Brown, who’s quietly had a very solid year to this point. At his likely price, I have to throw him in.