Champagne: Brown barn has many chances in Saturday's NYRA Pick 5 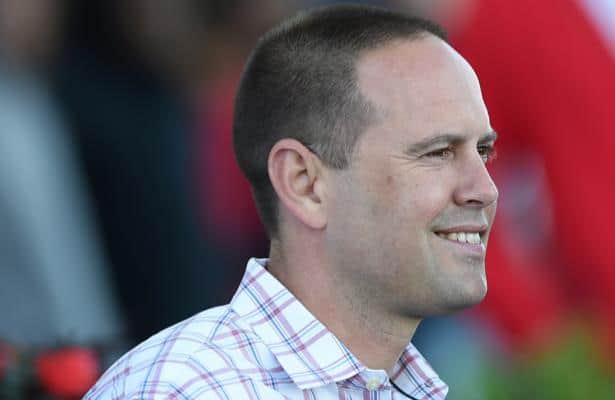 After two days where rainy weather has forced several NYRA Pick Five races off the turf (and, in the case of yesterday, decimated my submitted Pick Five ticket before it even got started), we appear to be in the clear for the first Saturday card at the meet. This is a good thing, too, as the sequence is headlined by the Grade 1 Diana and has two other turf races within it as well.

Because of the likely size of the pool, I went a bit deeper here than I have the past two days. My ticket comes out to $96 before scratches, and it’s built around my best bet of the day, which comes in race 10.

I’m going two-deep to kick things off. #8 RED ZINGER has been working very well since coming north for trainer Gary Contessa, and this cutback in distance should hit him right between the eyes. Additionally, I’m also going to use #7 LUTSKY, who makes his first start for Jorge Navarro and has several strong drills at Monmouth Park. Going fairly slim in this leg allows us to spread elsewhere, which is a very good thing…

…because I want as much coverage as humanly possible here. #6 PEACEFUL will likely be favored for logical reasons, but there’s no telling what he ran second against at Monmouth last month, so I can’t bring myself to back him with any real confidence.

I’m relying on the horseplayer’s best friend and hitting the “ALL” button here. If we get home in the first leg, we can breathe a little easier and root for a price here. Getting one will knock a lot of tickets out and bump up the payoff, so the incentive is certainly there.

Chad Brown saddles four of the six runners in here, and I’m using three of them. They’ll almost certainly be the top three choices in the wagering by a sizable margin, but doing so is the safe route to take in order to get to my single.

My top pick is #2 RUSHING FALL, who may not be getting her just due for all she’s accomplished. She’s won eight of nine career starts, the lone exception being a tough-luck second in last year’s Grade 3 Edgewood, and she comes in having won three consecutive Grade 1 races. She may not even be favored here due to the presence of #4 SISTERCHARLIE, but I think she’s the horse to beat.

I’m using Sistercharlie as well, although I think this is a hair shorter than she wants to go and she may need the race. Finally, I’ll throw in #6 HOMERIQUE, who has done nothing wrong since coming to America and may be peaking coming into this event.

As mentioned, I’ve got a single here, and it figures to be a pretty popular one. That’s #5 PAYNE, who has yet to run a bad race to this point in his career. He most recently ran a good second behind the talented Rowayton in a swiftly-run allowance event at Belmont Park, and this race figures to set up well for his late kick. I love the development he’s shown as a 4-year-old, and any further progression would make him incredibly tough.

I felt the need to spread a bit in this race as well, as I’m going four-deep to finish things out. #7 PROGNOSTICATION drops in for a tag and loves Saratoga, but he’s a 6-year-old now and that last start was far from encouraging. Maybe his back class is enough to beat these, and I’m certainly using him, but I can’t rely on him too heavily.

I’m also using #8 PATRIOT DRIVE, #9 SYCAMORE LANE, and #11 BATTLE OF BLENHEIM, all of whom figure to be square prices. Of that trio, I most prefer Patriot Drive, who comes in having won two in a row since going to the Danny Gargan barn. I wish the draw was a bit kinder to them, but any of the three could win this on their best days, and they may be good enough to overcome the outside posts.