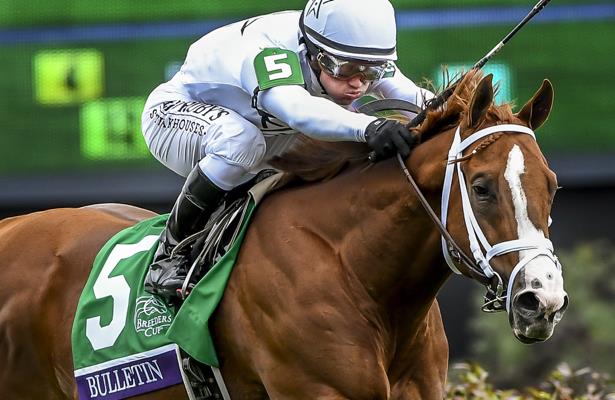 Like many other tickets in that wager, our all-stakes Pick 5 fizzled when Shancelot got reeled in in the final strides of Saturday's Allen Jerkens. Alas, we’re back at it Sunday with a $135 ticket that’s likely to get a bit cheaper after scratches.

I thought this was a tough sequence. There are no singles on my ticket, and we may wind up relying on some prices in the second leg if my top pick doesn’t draw in. Let’s get to it.

If you’ve got deep pockets or a single, buying the opening leg isn’t a bad idea. It’s a great betting race, and a number of runners appear very live. I’m going five-deep, and I hope that’s deep enough.

#5 GYPSUM JOHNNY makes some sense. He ran well late when fourth for a higher tag against state-bred and beat similar company two back. Jose Ortiz sees fit to ride back, but he’s 0-for-4 at Saratoga and has won just once in his last 12 starts. I’m using him, but it’s not like he towers over this bunch.

I’m also throwing in #1 SOUL P SAY, #7 LOVE THAT JAZZ, #8 SCARF IT DOWN, and #10 SIR BALLANTINE. Sir Ballantine, in particular, intrigues me at his likely price. His last race is a throwout, as it was a failed turf experiment first off the claim, and he ran a decent third against similar competition two back over this track.

The horse that jumps out to me likely won’t draw in. That’s #14 LAS RAMBLAS, who needs four defections from the body of the field. She’s bred to be a solid turf horse, and she won’t have to be much to win on debut for top first-out trainer Wesley Ward.

If she doesn’t draw in, my top pick defaults to a big price. #4 LARRY’S BABY didn’t show much in her debut, but that was a loaded race. The third-place finisher and second-place finisher ran well to finish 1-2 in a similar race later in the meet, and this spot represents a class drop. Add in first-time Lasix, D. Wayne Lukas’ recent success with second-time starters, and a pedigree that screams turf, and you have a horse that, to me, seems very live at or near her 15-1 morning line price.

I’ll also use #9 YELLEN, who showed speed first time out against straight maidens at Churchill. That day’s third-place finisher has since graduated, and like the bigger-priced entry I’ve discussed, she may benefit from the drop.

The big question here is this: Can #7 BULLETIN get two turns? If he can, the race likely goes through him, and I don’t think the added distance will be a problem. His dam, Sue’s Good News, also threw Tiz Miz Sue, who was a Grade 1 winner going long. Offspring of City Zip can go a mile, and he certainly seems like the controlling speed.

I’ll also defensively use #1 FRONT RUN THE FED, who stretches out after two impressive wins downstate for Chad Brown. I’m not as crazy about his ability to get two turns, but it’s entirely possible he’s figuring things out late in his 3-year-old campaign.

I can’t get too cute here, as I’m using three horses that all figure to take some money. #2 MEET ME IN L A is bred up and down for two turns, which he gets for the first time. He comes in off of a bullet workout and could sit a perfect stalking trip just off the speed.

I’ll also use #1 MO GOTCHA, who has yet to run a bad race in three prior starts, and #7 TAPIT WISE, whose second-place finish earlier this meet was pretty sharp. The only short price that would truly surprise me is #4 EXTRORDINARY JERRY, whose lone recent win came in a weak off-the-turf race at Gulfstream. At his likely price, I’ll try to beat him.

While I’m using likely favorite #4 AUGUSTA MOON in the finale, she isn’t my top pick. She drops in class for a strong barn, and it’s not like she’s lining up against much here, but it’s always tough to tell whether or not Monmouth form will translate to Saratoga. At her likely price, she’s a defensive use simply because I can afford to put her on my ticket.

My top pick is actually #2 ART THIEF, who makes her first start off the claim for George Weaver. She was fourth against similar downstate last time out, and that day’s winner has since won again. The addition of blinkers could help, and I think she’s eligible to improve. I’ll also throw in #1 COUNTENANCE, who goes back to the turf and put forth two OK efforts on the lawn this past winner at Tampa.

Lunsford looks to 'enjoy the ride' ahead of first Kentucky Derby
Bruce Lunsford has done a lot of things during his...

Math Wizard out to show he's more than a one-race wonder
Math Wizard shocked the racing world when he regis...