Ross: Pioneerof the Nile's legacy will build on after his death 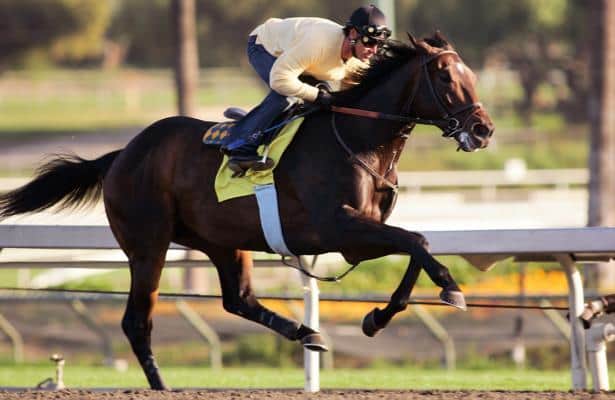 On Monday, shockwaves rolled through the racing community yet again, after an announcement that Pioneerof the Nile, one of the brightest young stallions in North America, had unexpectedly died.

The racing and breeding community mourn with the heartbroken staff of WinStar Farm and the Zayat family, which campaigned Pioneerof the Nile through the 2009 Triple Crown trail and a second-place finish in the Kentucky Derby.

What sort of legacy will the late stallion leave?

Pioneerof the Nile (Empire Maker - Star of Goshen, by Lord At War) was a member of Belmont Stakes winner Empire Maker’s second crop and hailed from the Fappiano branch of the Mr. Prospector line.

Pioneerof the Nile’s distaff line was unusual. His dam was a stakes-winning daughter of Lord at War, a champion Argentinean miler. By the sire General, Lord at War stood at stud for a time in the U.S. and transferred to France in the late 1980s. He was a productive stallion, getting 48 stakes winners from 301 to race (15.9%). He was an even better damsire. Lord at War’s daughters bore Kentucky Derby and Preakness winner War Emblem, Breeders' Cup Classic winner Raven’s Pass and top-level winners Citronade, Purum and Icon Project. Besides Pioneerof the Nile, Lord at War is also the damsire of stallions E Dubai and Dominus. Lord at War’s ancestry includes the great Ribot, double strains of Hyperion, and Petition.

Pioneerof the Nile’s second damsire Key to the Kingdom, by Bold Ruler out of the Princequillo mare Key Bridge, was a half-brother to champion 3-year old Key to the Mint and to three-time Champion Grass horse Fort Marcy.

Pioneerof the Nile was campaigned throughout his 10-race career by breeder Zayat Stables and Bob Baffert. The dark bay son of Belmont Stakes winner Empire Maker won in his second start in late August as a 2-year-old.

His juvenile season was fairly unremarkable, as he won a 1 1/16-mile turf maiden at Saratoga before flashing his talent in the Breeders' Futurity (G1), finishing third over Keeneland’s Polytrack. It wasn't until December when the late-developing colt put it all together. He compiled a four-race win-streak, sweeping the Cash Call Futurity (G1), Robert B. Lewis Stakes (G2), San Felipe Stakes (G2), and Santa Anita Derby (G1). Pioneerof The Nile put in a strong effort in the Kentucky Derby, handing the Zayats the first of their three runner-up finishes in the first leg of the Triple Crown.

After an uncharacteristic 11th in the Preakness Stakes, the colt received some time off. While preparing for a fall campaign, he sustained a soft tissue injury to his left foreleg and retired with a 10: 5-1-1 reocrd and earnings of $1,634,200.

Pioneerof the Nile was the first son of Empire Maker to begin a stallion career. Within nine years, his fee jumped from an initial $15,000 a Vinery to $110,000 at WinStar at the time of his death.

The large dark bay stud has seven crops of foals on the track, with an eighth to race this year. Included in those seven crops are four champions, and 34 black type earners -- 11 of them graded -- including two Breeders’ Cup winners. His stakes-winning offspring won from six furlongs to 1 1/2 miles.

The roster of his accomplished foals is familiar to most racing fans and includes:

American Pharoah, our first Triple Crown winner in 37 years, and Eclipse Award Champion 2 and 3 year old. His foals head to the track this year.

Social Inclusion, third in the Preakness, and at stud as of 2017.

There’s no doubt that Pioneerof the Nile’s passing is a blow to the breeding industry. He offered precious stamina affinities in a country overpopulated by sprinter/miler speed.

Cairo Prince, on his way to becoming a notable sire in his own right, hasalready  given us graded stakes winner Cairo Cat, and stakes winners Giza Goddess, Mihos, and Marquee Prince. His offspring are capable over dirt and turf, and he may eventually sire a classic or Breeders’ Cup winner.

There are grand expectations for American Pharoah to take over the mantle of his sire, as his little black book of dates from his first crop reads like a who’s who of the racing world. Everybody seemingly wants to breed to the first Triple Crown hero in 37 years. American Pharoah's babies look like their sire, leggy brown wrappers. But not just any brown wrappers, and far from plain. These are elegant horses who, if they’ve received their sire's demeanor and run to their looks, will be winning right and left.

Pioneerof the Nile may be gone, but his legacy is far from sealed. Besides his current capable sons at stud, Pioneerof the Nile has 89 reported foals in his 2017 crop and 99 reported foals in last year’s crop. They’ll be hot commodities at the sales - who knows how many stakes horses may be among them? -- and it wouldn’t be outrageous to expect to see another champion or two in the bunch.