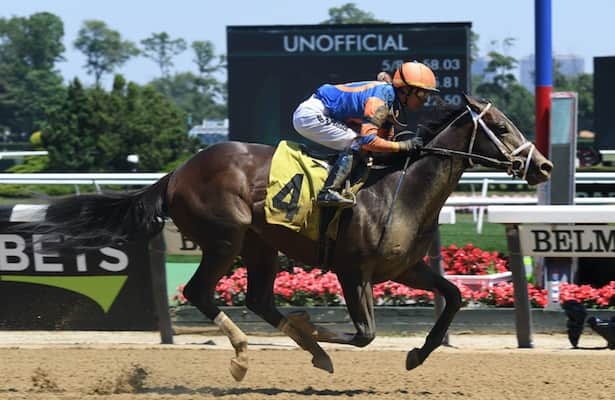 Arrogant Lady. 2016 champion 3-year-old-colt Arrogate was strongly supported by Juddmonte Farms, and his first book was filled with accomplished fillies and elite producers. His first crop of 109 foals are large, well-balanced, two-turn types, typical of the Unbridled's Song line. Most will be later maturing.

Arrogate will be represented by his first runner, Arrogant Lady, who is entered in Friday's first race at Belmont Park. She is a half-sister to the multiple stakes-winning sprinter Heartwood, who earned $486,891 in 33 starts, and to stakes-placed Luzmimi Princess. Their dam Maple Forest is a multiple stakes-winning sprinter who was stakes-placed as a juvenile.

Gun Runner has 127 foals in his first crop. He currently is ranked No. 2 on the first-crop sire list by earnings, with three winners and two runners-up from six starters. His foals are large and well balanced, and most will prefer longer sprints to classic distances.

Red Run is Gun Runner's first runner and leading earner. The Steve Asmussen trainee won his five-furlong debut by 1 3/4 lengths over a sloppy track in :59.22 at Churchill. Red Run is the first competitor out of an unraced full sister to 2014 champion 3-year-old filly Untappable and is also a half-sister to multiple Grade 1-winning turf router Paddy O'Prado.

Two-time starter Gunite, also campaigned by Asmussen, is nominated to Saturday's Bashford Manor Stakes (G3). Gunite is the first competitor out of juvenile stakes winner Simple Surprise and has improved his placing in both starts.

Into Mischief's son Practical Joke has three winners from seven starters, including Wit, who captured his Belmont Park debut by seven lengths. We are sure to see the Todd Pletcher trainee in the upcoming Saratoga stakes.

Pretty Birdie is the first runner and winner for her first-crop sire Bird Song, who was sent to Saudi Arabia after his first year at stud in the U.S. Pretty Birdie's dam was in the money 11 of 12 starts. She's a half-sister to Golden Rod (G2) runner-up Bird Maker and to stakes-placed sprinter Cheechako.

Two stakes winners who might make their presence felt at Saratoga are Overbore and Happy Soul.

Overbore won in his third start, the Tremont Stakes, by 3/4 of a length. The son of Speightstown is the first competitor out of the multiple stakes-winning sprinter-miler Galina Point, who earned $486,561 in 36 starts.

Happy Soul recently captured the Astoria Stakes by 11 1/2 lengths. The daughter of Runhappy has precocious sprint breeding, but there's not much black type in her family. Her half-brother Calgary Caper is a Grade 3 winner at Hastings, and their third dam De La Devil is a multiple-graded winner, including the Golden Rod (G2).