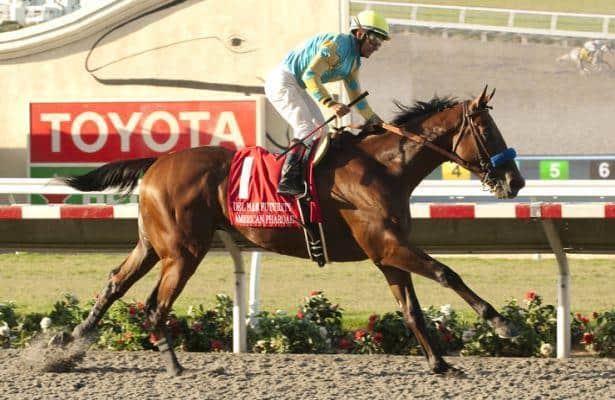 Del Mar just concluded its opening weekend on Sunday, while Saratoga launches their 2015 meet on Thursday, July 23. As I’ve done over the last four years, I’ll continue the Kiddie List as I seek out the best and brightest of this next generation. American Pharoah, Condo Commando, Take Charge Brandi, Carpe Diem, Mr. Z, Frosted, Dullahan, Take Charge Indy, Union Rags, Creative Cause, Drill, Dreaming of Julia, Beholder, and countless other runners were featured on the Kiddie List before they hit the national radar. Many juveniles that were highlighted on the Kiddie List have rewarded their backers with double digit wins.

The Kiddie List covers the fastest workers and blue bloods breezing four furlongs and farther.  I’ll cover the New York, Kentucky, California, and Florida tracks, and occasionally Arlington, Fair Hill and Monmouth. If a particularly well bred baby from the database shows up at another track, I’ll include that one as well. Due to the enormous number of juveniles, some of these names may show up only once or twice.  You can find more of this season’s two year olds on the 2016 KENTUCKY DERBY and 2016 KENTUCKY OAKS contenders' pages.

Let’s take a look at five maidens who recently sparkled in their debut. They are the ones to note for future stakes races.

SHOGOOD (Nobiz Like Shobiz - Good and Rough, by Good and Tough) (C) trained by Scott Becker for William Stiritz, Shogood dazzled in his second start.  Sent off as the favorite over the Arlington Polytrack, Shogood and jockey Chris Emigh toyed with a full field of maidens, getting  5 ½ furlongs in :57.60, just a second off of the track record of :56.51 set in 2007.  Shogood has a blue-collar pedigree, yet his three half siblings to race are all multiple winners.  Their dam is a half sister to the multiple stakes winning sprinter HOIST THE BABA.   Arlington cards only one major stakes race for two year olds colts, the Arlington-Washington Futurity.  Perhaps we’ll see Shogood there.

DREAMOLOGIST (Tapit - Dreaming of Anna, by Rahy) (F) trained by Richard Mandella for LNJ Foxwoods.  You may recognize the name of this filly’s dam, Dreaming of Anna. The versatile Dreaming of Anna could run over anything, dirt, turf or Polytrack.  Dreaming of Anna was the 2006 Champion 2 Year Old Filly.  Her first foal, All Her Class (Street Cry) never won, but she placed in a minor juvenile stakes race.  Dreaming of Anna’s second foal Fast Anna (Medaglia d'Oro) never won a stakes race, but he did finish second in the King’s Bishop (G-1).  The third foal Dreamologist, made her initial start on July 16.  Breaking from post 5, the pretty light gray filly was gunned to the lead by Flavien Pratt and dueled through fractions of :22 and :45.30. Speed isn’t holding at Del Mar and Dreamologist got a little tired.  She was passed by the top pair, but re-rallied in deep stretch and came back to get third place. Richard Mandella is noted as a conservative trainer whose charges generally need a start or two under their girths before winning.  Look for Dreamologist to run a winning race next time out.

LOOKOUT SISTER (Giant's Causeway - Traveling Alone, by Mt. Livermore) (F) ($150K KEENOV13) trained by H. Graham Motion for Chadds Ford Stable.  The large, chestnut filly had a remarkable debut on July 18. Lookout Sister raced down on the rail in traffic much of the race, settling into fourth place. Traveling around the far turn, jockey Trevor McCarthy pulled a Calvin Borel stunt, Velcroing to the rail and slipping up the inside while the rest bore out around the turn.  Things got a little tight when another filly tried to bear in, but Lookout Sister never wavered and continued her run.  She blew past the pace setter to win the 5 ½ furlong race by 1 ½ lengths. It was five lengths back to the third place finisher. Lookout Sister stopped the timer in 1:05.25.  Her dam is a half sister to Belmont Stakes hero UNION RAGS (campaigned by Chadds Ford Stable) and to the dam of  the English multiple Group 1 winner DECLARATION OF WAR, Grade 3 turf miler WAR CORRESPONDENT and the stakes placed turf router Vertiformer.   Lookout Sister has a distance over stamina pedigree and I expect that she’ll be most comfortable going a mile to 1 1/16, and in some instances possibly 1 1/18 miles. With plenty of turf attributes in her lineage, Lookout Sister may also handle the lawn.  Looking forward to seeing this classy chestnut in upcoming stakes races.

HAMMERS VISION (Court Vision - Baytree, by Forestry) (C) ($47K FTKOCT14)  trained by Brian Lynch for Terry Hamilton. The bay colt is the first of seven runners sired by freshman stallion Court Vision to visit the winner’s circle. Court Vision is a multiple G-1 winner who capped off his lengthy career with a victory in the Breeders’ Cup Mile.  Hammers Vision has a modest pedigree. A second foal, his half sister is a winner as is his dam. Neither own blacktype.  The dam is a half sister to a producer of a minor stakes placed turf runner.  The second dam Ginseng is multiple stakes placed. In his debut, Hammers Vision was reserved early off of the pace in fourth on the rail through fractions of :22.36, 45.22 and :56.77. Jockey Joel Rosario got to work on Hammers Vision, swinging to the outside in deep stretch.  The colt picked it up with a good turn of foot and under a hand ride, glided past the front runners to win by 1 ¾ lengths without being fully extended. He flashed under the wire in 1:08.99. Hammers Vision has a miler pedigree and I expect that he won’t want to go any farther than 1 1/16 miles.

HOLDING GOLD (Lonhro (AUS) - In the Gold, by Golden Missile) (C) Trained by Mark Casse, this Live Oak Plantation homebred became his sire’s first North American winner on July 19 in a maiden race over the Woodbine polytrack.  Sitting comfortable off of the pace in fourth on the rail, Holding Gold was content to wait through splits of :21.98 and :44.84 before switching to the outside.  Once in the clear, the bay colt lengthened stride and cruised by the battling front runners to score by 2 ¼ lengths. His final time was an excellent :57.09 for five furlongs. The track record is :56.41 set in 2009.  Holding Gold’s dam won the Beaumont (G-2) and the 1 1/8 mile Gazelle (G-1). She finished second in the Kentucky Oaks, Acorn and Test Stakes. Holding Gold is her fifth foal. None of his half siblings own blacktype, but all are winners.  Holding Gold has the pedigree to handle classic distances and could be versatile over dirt or turf. Perhaps we’ll see him in one of the stakes at Woodbine or maybe the Florida-bred colt will journey to Saratoga.