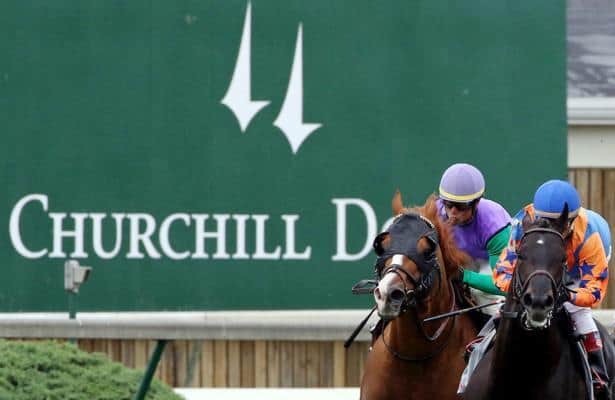 Friday racing at Churchill Downs includes two maiden events, one each for fillies and colts. There’s a full sister to Grade 1-placed Nitrous, plus one out of a half-sister to Maximum Security and one from the family of multiple Grade 1 winner McKenzie. First-crop sires Mastery, Connect and Bird Song are represented.

Let's take a look at the ones most likely to hit the board.

All stats are from Stats Race Lens.

Speedometer (Tapit - Speedinthruthecity, by City Zip) is a full sister to multiple stakes winner and Grade 1-placed Nitrous. Their dam is a stakes-winning sprinter who placed in three juvenile stakes. Her work tab is unremarkable. Tapit gets 18 percent winners from 2-year-old first time starters in dirt sprints. Steve Asmussen has a 17 percent win rate with debuting 2-year-olds.

Penny Saver (Super Saver - Appreciating, by Sky Mesa) recorded a second-to-last four furlongs in 47.20, third best of 115. Before that, she breezed a bullet three furlongs in 35.40, the best of 34, so the filly should be ready to go.

Super Saver gets 14 percent winners from 2-year-old first time starters in dirt sprints. Penny Saver’s half-sister Nasreddine was third in last year’s Starlet (G1). Their dam was third in the Natalma (G3) for juvenile fillies. This is the family of Grade 1 winning turf miler Celestine. Ken McPeek has an 8 percent win rate and is 33 percent in the money with debuting 2-year-olds.

We may quickly discover whether Hazy Command (Mastery - Justasprinkle, by Gilded Time) has what it takes. The Tom Amoss trainee posted two consecutive sharp five-furlong works of 59 and change in May.

Only two of her five half-siblings hit the board in their debut, but both evolved into multiple-stakes winners. Justalittlesmoke earned $737,870 in 24 starts as a sprinter, as well as honors as Ohio’s champion 2-year-old and 3-year-old filly. Half-sister Portals earned $194,500 in 23 starts and was a multiple-stakes winner at 2, 3 and 4.

According to Stats Race Lens, First-crop sire Mastery is represented by four starters. None have hit the board. Amoss has 22 percent winners from starters, with 2-year-olds making their debut in dirt sprints.

Worth a long-shot look

Verylittlecents (Goldencents - Pinch Me, by Arch) hails from a precocious family. Her half-brother Bold Thirst won his debut and placed in the Jean Lafitte Stakes for 2-year-olds. Their unraced dam’s half brother No Dozing placed in the Remsen (G2), and is a Grade 3-winning sprinter. The daughter of Goldencents has a fast/slow breeze pattern. Goldencents gets 12 percent winners from 2-year-old first-time starters in dirt sprints. Randy Morse has a 9 percent win rate and is 30 percent in the money with debuting 2-year-olds.

Pretty Birdie is a product of the famed Whitney Stables breeding program. She is the first runner for her first-crop sire, who was sent to Saudi Arabia after his first year at stud in the U.S. Pretty Birdie’s dam was in the money 11 of 12 starts. She’s a half-sister to Golden Rod (G2) runner-up Bird Maker and to stakes-placed sprinter Cheechako.

Race 3 on Friday’s Churchill card at 5 1/2 furlongs on the lawn drew an over-subscribed field of 14 2-year-olds.

If he draws in, take a hard look at Seize the Treasure (Carpe Diem - Board Battle, by Seeking the Gold). He pressed the early pace, and put away the pacesetter at the top of the lane, only to be challenged on the outside. Seize the Treasure fought gamely, but lost the photo by a neck.

Creative Kid (Creative Cause - Crozat, by Street Sense) debuted on the Keeneland turf in April. He broke with the leaders but had to steady behind horses, then moved out four wide around the turn for running room. He hesitated and bore in for a moment in the stretch, looking a little lost, but picked it up to finish third, bested a short nose for second place. The Hancock trainee posted two moderate post-race breezes.

Trebbiano (Connect - Class E Holiday, by Harlan's Holiday) has excellent gate speed but hasn’t been able to sustain it in three starts. His first-crop sire Connect, a later-maturing son of Curlin, has one winner from five starters and eight in the money. Trebbiano is his first turf starter.

Pedigree: Trebbiano eventually may be suited by a pace-pressing running style over the lawn. His dam’s half-sister Clearly Foxy won the Natalma (G3) and placed in the  American Oaks Invitational (G1) both over the lawn.

Pedigree: Vancouver has good 13 percent win and 40 percent in the money stat with first time 2-year-olds on turf. Slim Slow Slider’s dam and one of his half-siblings won first time out. There’s minor black type in the female family. Entice’s full sister Major Idea is a stakes-winning miler, and is a Grade 3 placed juvenile. She bore a couple of stakes-placed runners.

Embrace (Blame - Miss Tattle Tale, by Tale of the Cat) shows a series of slow, steady works for Tom Drury Jr. The trainer has a 24 percent win rate and is 52 percent in the money with debuting 2-year-olds.

Pedigree: Blame gets only 7 percent winners from first-time turf starters, but 41 percent hit the board. Embrace’s immediate family is precocious, as his half-sister and dam won their debuts. There’s little black type in the first two generations of Embrace’s distaff line, but this is the family of multiple Grade 1 winner McKenzie.

Despite his illustrious distaff line, Gingrich’s sire Mr Speaker isn’t noted for getting first-out winners over the lawn. From 18 starters, only 11 percent have hit the board and none have won. Gingrich shows a series of slow, steady works. Brian Lynch has a 7 percent win rate and is 30 percent in the money with debuting 2-year-olds.