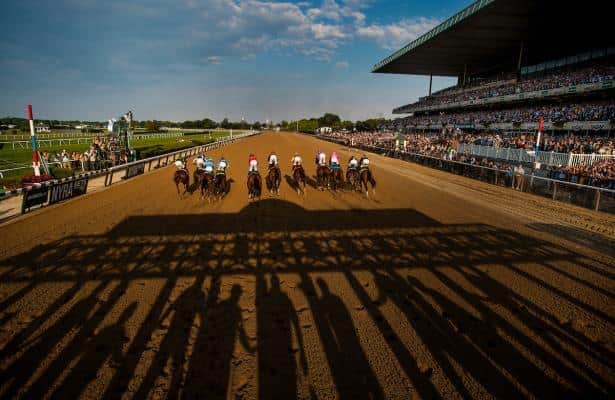 Let's take a look at the ones most likely to hit the board.

All stats are from Stats Race Lens.

This is a maiden special weight at six furlongs for a field of eight 2-year-old fillies. Wesley Ward and Christophe Clement entered two each.

Here are the ones most likely to hit the board.

Kodama (IRE) (Kodiac (GB) - It's True (IRE), by Kheleyf) chased the swift early pace in her turf sprint debut at Belmont. She improved position to second place but was lugging in through the stretch. Kodama's post-race breeze was quicker than pre-race works, an excellent sign that she'll progress.

Pedigree: Kodama's pedigree and conformation is that of a sprinter. Her distaff line is primarily international, although her dam's half-brother Kahal is a multiple Grade 2-winning Canadian turf sprinter.

Pammy's Ready (More Than Ready - Pammy Whammy, by War Front) raced mid-pack and was four to five wide the entire way in her turf sprint debut at Keeneland. She made up ground in the stretch to earn fourth place in a photo. It was a good first effort, and there is no reason she cannot move forward here.

Pedigree: Pammy's Ready is the first competitor out of Pammy Whammy, who hit the board in 3 of 6 starts. Pammy Whammy's half-brother Clearance Clarence is juvenile stakes placed as is the third dam, Native Talk.

Mannhal (Into Mischief - Vanquished, by Empire Maker) was sold to Shadwell Stable for $420,000 as a weanling at the 2019 Keeneland November mixed sale. The Todd Pletcher trainee has a steady breeze pattern and took a pre-race spin around Saratoga's turf training course, getting four furlongs in 50.0 seconds, the fifth-best of 32 works. Pletcher has a 14 percent win rate and is 42 percent in the money with 2-year-olds debut turf starters.

Pedigree:  Mannhal may prefer two turns, yet six furlongs should be within her range. She's a three-quarter sister to two stakes winners; multiple graded-stakes turf horse Takeover Target, a winner between a mile and nine furlongs, and stakes-winning turf miler Ladies' Privilege. Their dam is a half-sister to two-time champion New York-bred mare and multiple Grade 1 winner Critical Eye.

Divine Wine (Into Mischief - Cana (AUS), by Fastnet Rock (AUS)) was a $275,000 OBS March 2-year-old in training purchase for William Lawrence. The Chad Brown trainee has a series of steady four-furlong dirt works in the 48- to 49-second range over the last months. Into Mischief has 18 percent 2-year-old winners from first-time starters in turf sprints. Brown has a 19 percentage win rate and is 51 percent in the money stat 2-year-old debut turf starters.

Pedigree: Divine Wine is the second competitor out of an Australian Group 3-placed sprinter. Divine Wine's half-brother by Malibu Moon hit the board once in four tries; his latest effort earned a third-place finish over the Fair Grounds turf. The black type in Divine Wine's distaff line is composed of Australian turf sprinters.

This is a maiden special weight at 5 1/2 furlongs for a field of eight New York-bred 2-year-old fillies. Three fillies stand out.

Banksamillion (Central Banker - Shopit, by Yes It's True) is a half-sister to Shoplifted, who placed in the 2019 Hopeful (G1) and was third in last year's H. Allen Jerkens Memorial and the Woody Stephens Stakes, both Grade 1 sprints. Bill Mott gave Banksamillion a pre-race four-furlong work of 49.82 seconds, third best of the day.

Shesawildjoker (Practical Joke - Tarquinia, by Speightstown) Practical Joke is off to an excellent start at stud with two winners and a runner-up from three starters. The son of Into Mischief is the fourth-ranked first-crop sire. David Donk has this filly ready to go; she has two solid, back-to-back, gate breezes.

Saratoga Kisses (Kantharos - Kiss the Flag, by Quiet American) was a step slow out of the gate in her debut. She was in an extended drive the entire race and earned second place for her efforts. The Rudy Rodriguez trainee has a pre-race breeze of 49.17 seconds for four furlongs, the third best of 20.