Derby pedigrees: Super Stock could be challenged by distance 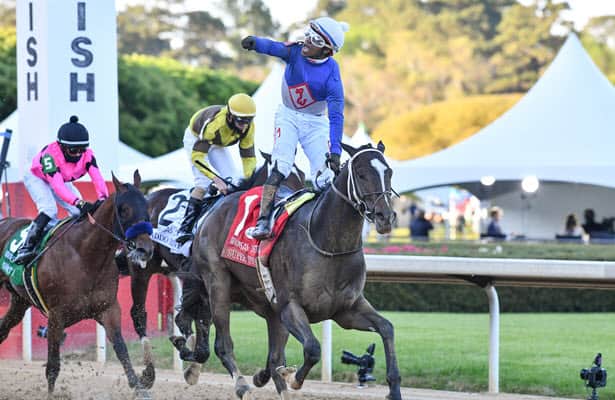 Ricardo Santana Jr. kept Super Stock on the rail directly behind the battling Concert Tour and Caddo River until the top of the stretch. The pair switched to the outside, and Super Stock cruised by under a hand ride. He was timed in 1:50.92 for 1 1/8-miles. Super Stock got his final furlong in 13.28.

Super Stock finished fourth in the Rebel Stakes (G2) in his 3-year-old debut. He graduated in last year’s Texas Thoroughbred Futurity then placed third in the Iroquois Stakes (G2) and the Claiborne Breeders’ Futurity (G1) before capping the year off with a place finish to recent Lexington Stakes winner King Fury in the Street Sense Stakes. Super Stock has an 8: 2-2-2 record and $804,762 in earnings.

Pedro Gonzalez & P.J. Gonzalez bred Super Stock, and the colt was purchased out of the 2019 Keeneland September Yearling Sale for $70,000 by Keith Asmussen & Erv Woolsey.

Pedigree:  Super Stock (Dialed In - Super Girlie, by Closing Argument) has a middle-distance pedigree. He has tactical speed yet seems most comfortable pressing the pace or sitting directly behind it (Click here for the Super Stock pedigree chart).

Dialed In (Mineshaft - Miss Doolittle, by Storm Cat) is by 2003 Eclipse Award Older Horse Mineshaft. Dialed In went to the 2011 Kentucky Derby by way of Florida. He won the one-mile Holy Bull Stakes (G3) in his first start of his 3-year-old season, and after placing in an allowance race, he won the Florida Derby (G1) by a head over Shackleford.

Dialed In was made the favorite for the Kentucky Derby. However, he was squeezed back to 19th at the start and made a belated late run to finish eighth behind Animal Kingdom. He placed fourth after a similar trip in the Preakness.

Dialed In’s stakes-winning offspring haven’t been successful beyond nine furlongs. In the last five years, four of his babies have competed at the classic distance, and only his leading money earner Gunnevera has finished in the money.

Besides Super Stock, Dialed In’s 3-year-olds include American Pharoah Stakes (G1) winner Get Her Number, who placed fourth in the Arkansas Derby, and Papetu, who was third in the Fountain of Youth (G2).

Super Stock’s distaff line has sprinter/miler speed, with roots in Florida. As an interesting historical fact, he originates from the same female family as 1932 Kentucky Derby winner Burgoo King. They share the ancestress Sardica, who was foaled in 1882.

Super Stock’s dam Super Girlie (Closing Argument - Beafleet, by Afleet) spent her 39-race career in the claiming ranks in South Florida as a sprinter/miler. The mare competed for four years and was in the money 20 times, earning $121,728.

Half-sister Be Silver (Silver Buck) was a stakes-placed juvenile. She passed her precocity to her daughter Heir Kitty (Wildcat Heir), who placed against the boys in the Best Pal (G2) as a 2-year-old and won the seven-furlong La Brea Stakes (G1) at 3. Heir Kitty placed in two Grade 3s, one at six furlongs and another at 1 1/16 miles. She proved adept on the lawn, finishing third in the Sweet Live Stakes at six and a half furlongs.

Super Stock’s class comes from his third dam, Leave it Be (Lawmaker). The solid race mare competed for five years, mainly in stakes races between six to nine furlongs. The highlight of her career came in the Sixty Sails (G3) at nine furlongs. In all, Leave it Be went to the post 66 times, hitting the board in 40 starts. She earned $788,630.

As a damsire, he’s represented by 75 winners from 102 starters and five stakes winners. Four are sprinter/milers.